We continue our posts on the early missions around Lake Pátzcuaro with a page on one of the most important and best preserved, that of Asunción Erongarícuaro.
The town of Erongarícuaro is the largest settlement along the dry western shore of Lake Pátzcuaro. Erongaricuaro means "mirador" in the regional purépecha language and the picturesque Franciscan monastery here enjoys an exceptional vista of the lake. After 400 years the monastery still serves as a seminary and, to a great extent, preserves its 16th century appearance.
Although there was a primitive mission here in the early 1500s—a visita of Tzintzuntzan just a short canoe trip across the water—Bishop Quiroga refused the Franciscans permission to build a monastery here. So it was not until after Don Vasco's death in 1565 that construction began, continuing into the next decade and possibly involving some of the same artisans who were working on Tzintzuntzan. 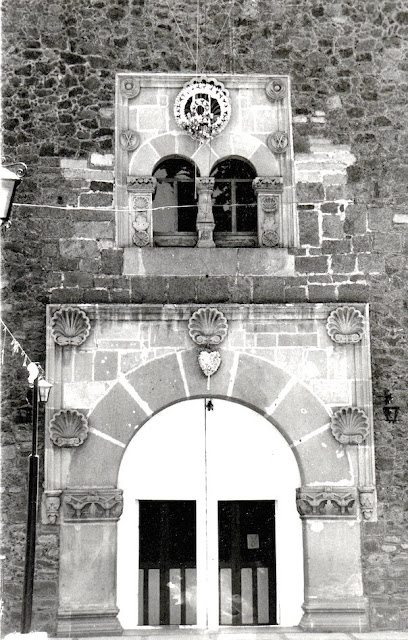 The Church
Just a few steps from the enclosed arcaded plaza, an arched gateway opens to the monastery atrium where an avenue of tall cedars leads us to the square church front.
The west doorway and ornamental choir window are classic statements of the regional, mudéjar flavored Plateresque style. Both are cut from smooth, cafe-au-lait limestone, and stand out sharply against the facade of dark, rough-hewn volcanic tezontle.
The broad Romanesque style arch of the doorway rests on equally wide jambs, headed by capitals of rustic volutes and acanthus leaves. But the doorway's most striking features are its five, giant, inverted scallop shells—a classic marker of church ornament in Michoacán—here undoubtedly derived from the mother monastery at Tzintzuntzan.

An even larger shell relief projects above the broad jambed ajímez choir window divided by an ornate baluster column, as at at Tzintzuntzan. Shells are also embossed on the jambs while relief rosettes and medallions with the crossed keys of St. Peter cling to the surrounding alfiz.
These similarities to Tzintzuntzan suggest the influence of Fray Pedro de Pila, a former Guardian at Erongarícuaro, and his skilled stone carvers in its design and reconstruction. 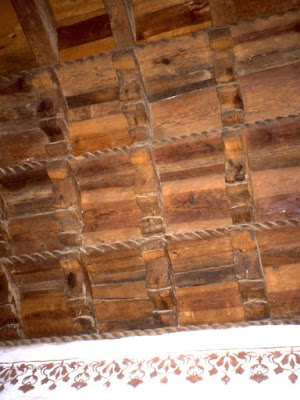 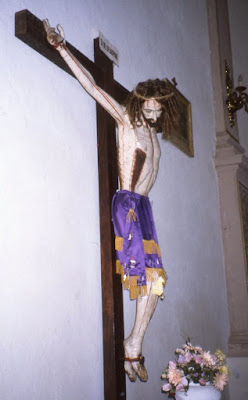 A beam and cane ceiling covers the boxy nave, supported on a remarkable triple arrocabe, or carved wooden frieze, banded with painted brackets and trimmed by a twisted cord molding.
The massive sanctuary arch, outlined in dark basalt blocks, draws the eye to the apse where a naturalistic crucifix, known as El Señor de la Misericordia, hangs above the altar.

The Convento An elegant triple arcade fronts the monastery beside the church. The high arches of the porteria rest on fluted columns capped with intricately carved "ram's head" capitals adorned with angels, cornucopias and the Franciscan knotted cord—all cut from soft, ivory-colored limestone. 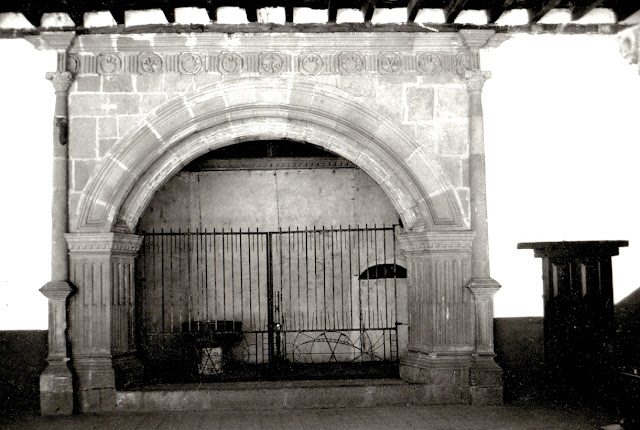 Recessed behind the center arch of the portico is the grand archway of the 16th century open chapel, a cousin of the chapel at Tzintzuntzan, although more Renaissance in flavor.  Flared, fluted piers brace its broad, paneled opening, surmounted by a dentilled frieze with medallions of the Sacred Heart alternating, again, with the crossed keys.
The flanking Gothic colonettes strike a medieval note echoed by the ribbed vault with the Franciscan cord. A choir loft spans the south end of the portería, and, at its north end, an arched doorway surmounted by an extravagant double alfiz of baluster columns gives access to the convento. 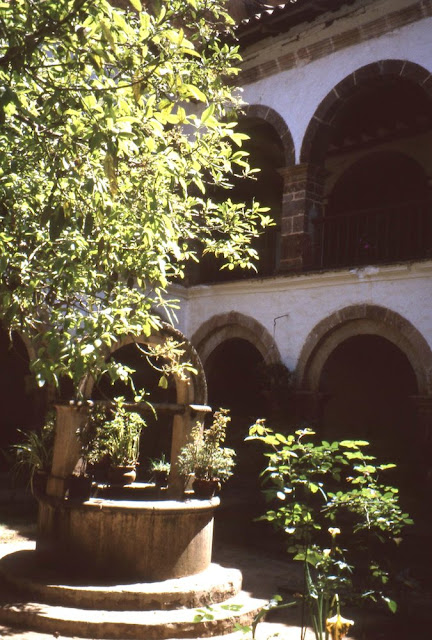 Blocks of reddish black lava stone like those in the sanctuary arch outline the stocky cloister arcades. Archaic doorways with low Isabelline arches open from the cloister into the surrounding rooms. 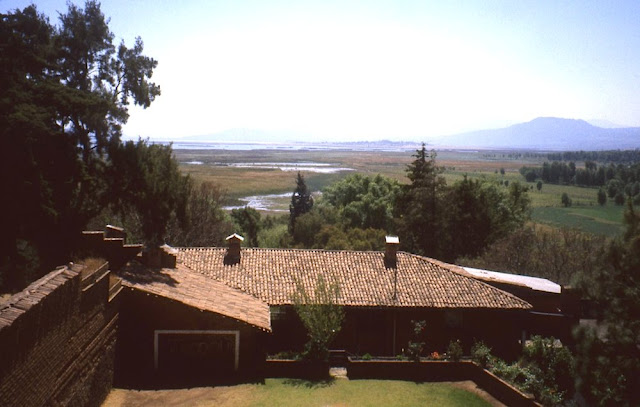