In a December 2016 ceremony, the keys to the newly restored chapel of La Conchita were handed to Franciscan authorities by an official of the federal Secretariat of Culture (Conaculta).
This event marked the culmination of many years of concern regarding the rapid deterioration of the chapel, its delayed repair and conservation and finally, restoration of this significant historic monument and artistic jewel in the busy Mexico City suburb of Coyoacán.

Reputedly built on the site of a pre Aztec temple from the tenth century, the first Christian chapel, or ermita, here was founded by order of the conquistador Hernán Cortés, and dedicated to the Virgin of the Immaculate Conception (familiarly La Conchita) in 1525.
Few traces remain however of the 16th century chapel, which was rebuilt in the mid 1700s. By 2011 however, this historic later building was in serious danger of collapse and was closed for repair, which involved partial sealing and strengthening of the walls and dome together with the badly cracked facade. 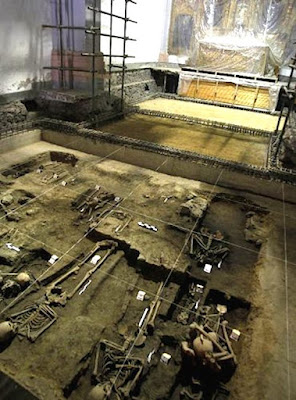 Discovery of multiple burials beneath the nave in 2013 further delayed the restoration until its completion at the end of 2016.
La Conchita is now open to the public once more. 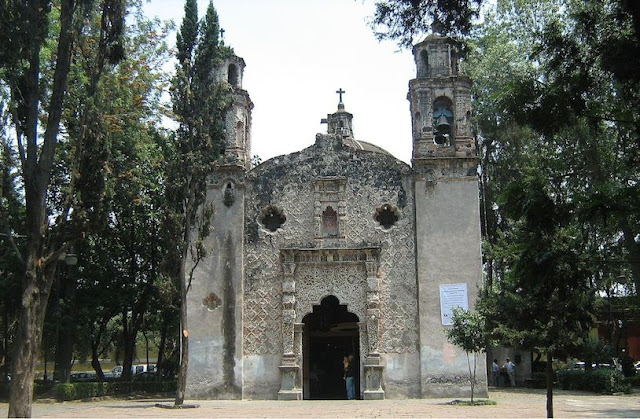 The Facade
Anchored by modest twin towers, the 18th century front is a study in popular baroque style. While ornate estípite pilasters frame the doorway and upper niche, the various Moorish style openings—doorway, niche and windows—evince a retro, neo-mudéjar taste. 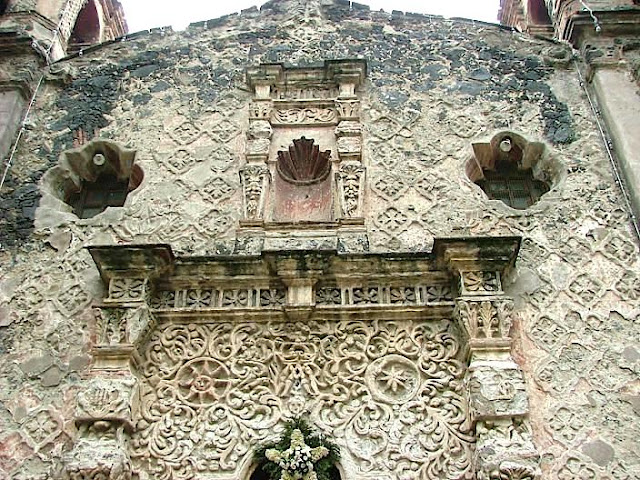 Likewise, all the intervening wall spaces are crowded with foliated relief in carved stone and stucco, creating an intense, tapestry like effect.  Above the doorway, the sun, moon and a crowned Marian monogram occupy the alfiz like space. 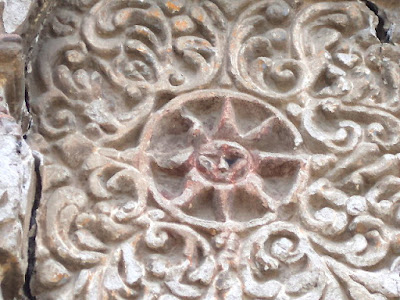