The Churches of Quecholac: La Merced

The picturesque town of Quecholac, located some 60 kms south east of the city of Puebla beside the Mexico—Veracruz toll road, is home to several colonial churches of interest.
These include the roofless temple of La Merced, the partly rebuilt Franciscan basilica of Santa María Magdalena, and the folk baroque churches of San Agustín and San Simón.

In our four part series on the Quecholac churches we look first at the temple of La Merced, illustrated here by several classic pictures taken after the 1999 earthquake that damaged many colonial buildings in the region.
Even in its present condition, the roofless temple of La Merced remains one of the most decorative churches in the state of Puebla.   Its 18th century facade and standing triple gateway are densely sculpted in stone and stucco relief—a exceptionally ornate example of the popular barroco poblano style.
Both the facade and the gateway display an eclectic architectural mix: classical friezes jostle with vine clad spiral columns and relief panels, enveloping lobed Moorish arches and hexagonal openings, all framed with bands of arabesque and foliated ornament.
The surfaces are alive with sculpted reliefs and statuary of angels and archangels, some set in decorative niches and others emblazoned above the archways or standing above the columns.
The Virgin of Mercy occupies the center niche. 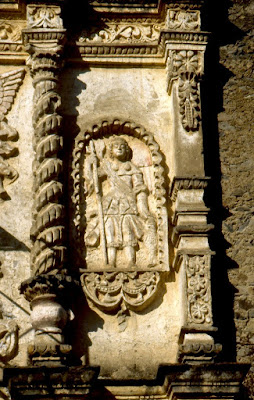 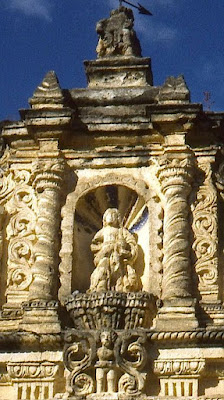 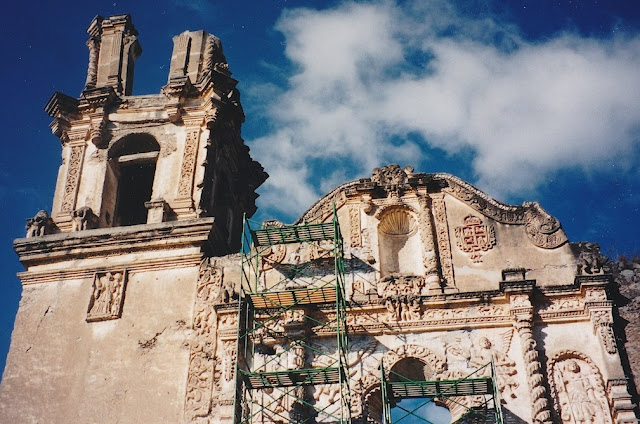 The Spanish royal arms and those of the Mercedarian order flank an elaborate shell niche in the upper facade, once doubtless also occupied by the Virgin of Mercy but now empty. Decapitated statues of saints occupy the lower niches 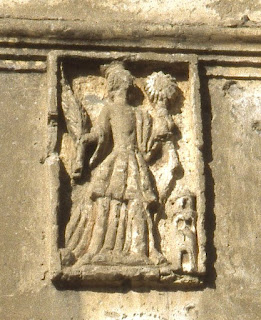 The lone tower sets precariously on its cracked base, which still retains a primitive relief of St. Barbara.
text and photography © 2000 & 2017 Richard D. Perry
Posted by Richard Perry at 10:51 AM