In our first post on La Conchita we reported on the history and recently completed restoration of this little chapel, located in the Mexico City barrio of Coyoacán. In this second post we look at the unusual main altarpiece of the chapel. 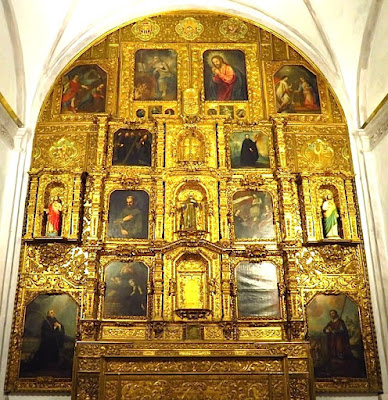 The Main Altarpiece
During the wholesale destruction and dismantling of gilded baroque altarpieces at various times—during the neoclassic revival of the late 1700s, the Reform of the mid 1800s and the Revolution of the past century—some sections of the earlier retablos were preserved and warehoused.
On a few occasions these disparate pieces were later cobbled together to create new, impressive, but iconographically incoherent assemblages to create what is known as a retablo fragmentario.
The newly cleaned main altarpiece at La Conchita is one outstanding example in the city of such an assemblage. While the large center section (A) appears to have come from a single retablo, the surrounding elements may come from as many as seven other sources, none of which have been currently identified.

Although the various elements show differences in design and ornament, stylistically all appear to date from the early to mid 1700s.  And while all of the statuary is recent, most of the paintings date from late colonial times.
While the overall iconology is inconsistent, as might be expected from the piecemeal reassemblage, the portraits of Jesuit saints and martyrs in the most complete center section point to its origin in a Jesuit church, probably dating from just before or after the Jesuit expulsions from Mexico in the 1760s.