We return to Yucatán to continue our posts on colonial churches in that region. 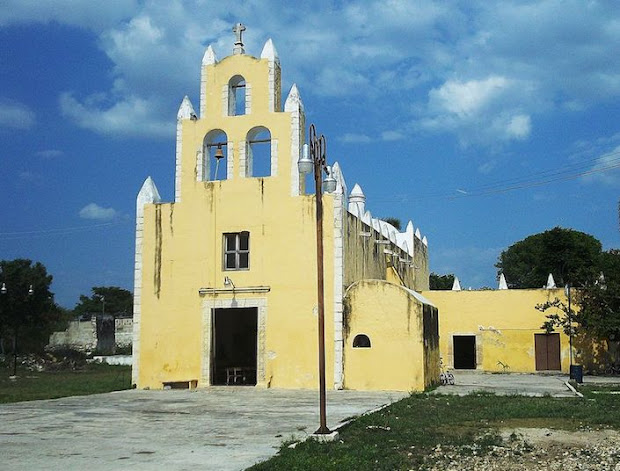 A few miles west of the city of Mérida, in the little village of Ucú, stands the little church of The Nativity. Located on an open, slightly raised site, probably a former Maya temple platform, Ucú was originally a visita of the church of Santiago in Mérida.
The church is conspicuous for its (currently) white stucco facade and pretty espadaña. Although these features, as well as much of the nave, were later additions, the domed chancel and baptistry were, in all likelihood, part of the original 16th century visita mission. 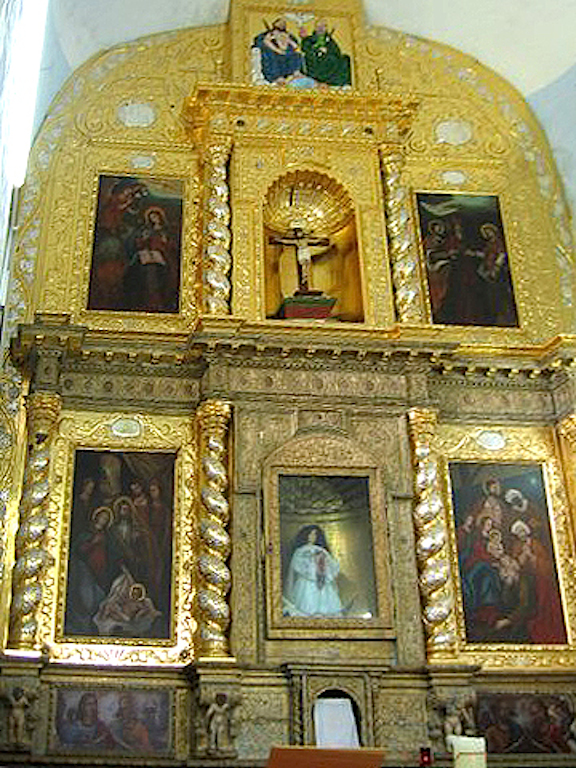 The Main Altarpiece
Inside the church at its east end stands Ucú's principal attraction: the late 17th century altarpiece.
During recent restoration, it was discovered that the lower part of the retablo was gilded beneath a surface layer of blue paint, thought to have been hastily added during the turmoil of the Revolution to protect the precious gold and silver leaf from Salvador Alvarado's advancing federal troops.
Now the retablo has been entirely regilded, its dense filigree ornament gleaming brightly as of old. The retablo is skillfully executed, with ornate spiral columns resting on little atlantean figures. 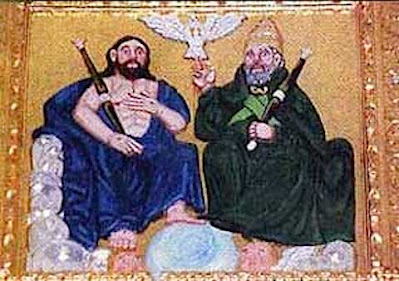 Some of the figure sculptures remain, notably the Virgin of the Nativity herself, and San Luis Obispo, an earlier patron of the church, whose carved and gilded colonial statue has also been restored.
Another outstanding feature is the distinctive folk relief of the Holy Trinity at the apex of the retablo. 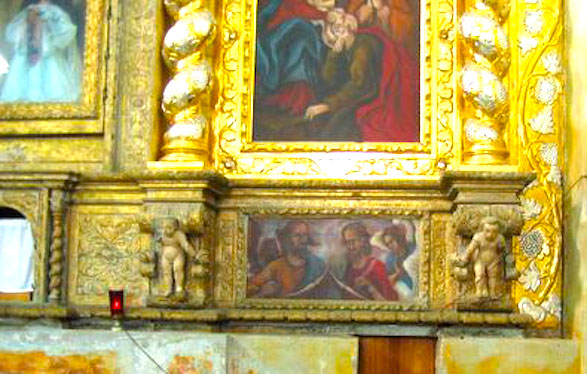 Although the original painted panels were missing from the altarpiece, six colorful new oil paintings were created in a compatible style by the local architect and painter Noemy Vallado Negroe, four depicting Nativity scenes and two with portraits of the Four Evangelists on the base panels.
text ©2005 & 2020 Richard D. Perry.
Special thanks to Charlotte Ekland, whose excellent color pictures, taken in December 2005, now adorn this updated page. Thank you again Charlotte!

For more on the history and art of the Yucatan missions, consult our published guides.
Posted by Richard Perry at 1:56 PM