For this post we return to Chiapas to revisit the great ruined monastery at Copanaguastla; among the most evocative 16th century monuments in Mexico. Abandoned less than a century after its founding, the sturdily built church has survived almost 350 years of neglect although now a shell. Today it stands a silent but steadfast sentinel, watching over the newly resettled village.

History
Soon after the Spanish Conquest, gold was discovered here in the hills and streams above the Grijalva River. The subsequent rush made the encomendero, Andrés de la Tovilla, a rich man, but devastated the Tzeltal-speaking Maya settlement.
In 1545, four Dominicans arrived, led by Fray Domingo de Ara, an energetic missionary and dedicated translator of devotional works into Tzeltal. In spite of the environmental ravages wrought by gold mining, the friars found the climate ideal—a veritable Jericho, as Fray Domingo once observed. They gathered the surviving Maya together and built a primitive thatched mission. Following the official nomination of Copanaguastla as a priory in 1556, erecting a permanent monastery became an urgent necessity.
The project went forward, supervised by the talented friar-architect Fray Francisco de La Cruz, but in 1564, by a cruel stroke of fate, the virtually completed church was struck by lightning. Hampered by famine and pestilence in the community, reconstruction of the building continued only sporadically until 1568, when a stone vault at last replaced the charred wooden roof—the final contribution of Fray Francisco who died in the same year. By the end of the 16th century, Copanaguastla had become the principal monastery for the region, and the friars were prospering from their sugar plantations and cattle haciendas.
But in 1629, another outbreak of the plague decimated the Indian population. Despite the great effort and expense that had been invested in its construction, the monastery was reluctantly abandoned. The friars moved to Socoltenango, near Soyatitan, taking with them the image of La Virgen del Rosario. In this higher, healthier location, the 16th century image (now known as La Candelaria), became the focus of popular pilgrimage during the later colonial years and into modern times. 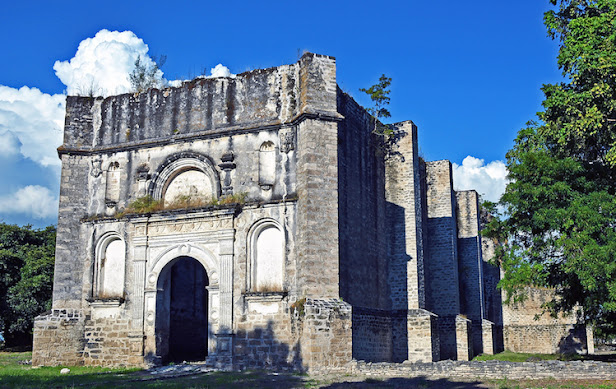 The Church
The plan of the sturdy stone church is based on the Latin cross—unusual for monastic churches of this early period. Squared buttresses brace its rubble walls, which are pierced at intervals by elongated, Romanesque like windows. Part of a cracked bell tower, which stood above the former convento, clings precariously to the surviving north transept. Long since fallen, Fray Francisco's roof seems to have been constructed in distinct sections using a variety of contruction methods.    The nave was spanned by a wooden artesonado roof resting on stone arches, one of which is still in place above carved corbels.
An octagonal dome at one time stood on corner squinch arches above the crossing, flanked by two ribbed mudejar vaults over the transepts. The collapsed square apse at the east end may have been covered by a solid barrel vault, perhaps like that at the unfinished priory church of Cuilapan (Oaxaca). 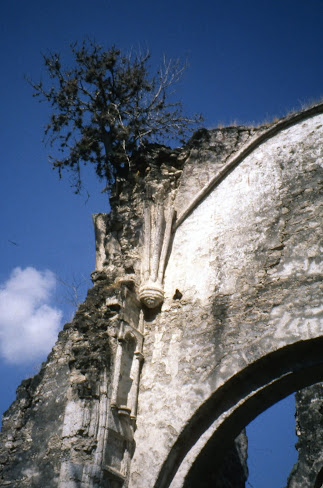 Fragments of the sanctuary arch, carved with shell niches, coffered panels and classical half columns, can still be seen at the crossing. Strangely, there is no evidence of the customary choir at the west end, possibly because the original wooden loft was not replaced after the 1564 thunderbolt. 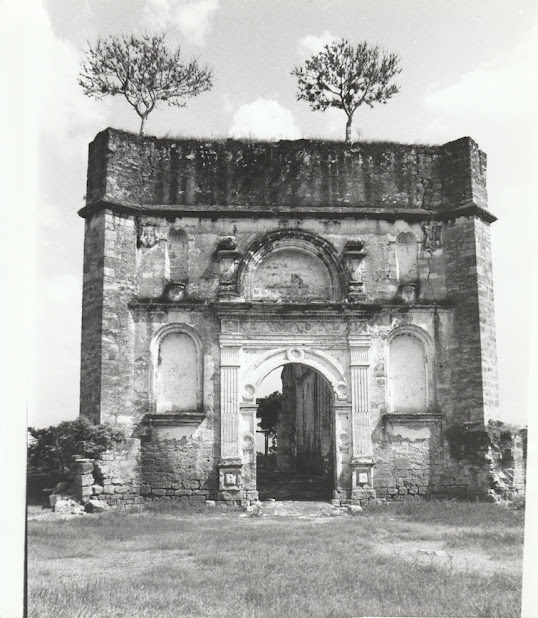 The West Front
Angled corner buttresses, a structural feature first used in the early Dominican monastery of Oaxtepec (Morelos), neatly anchor the west front. Trees now sprout atop the facade where the gable formerly rose. The squared facade is a plateresque composition, clearly related to Tecpatan and the Dominican missions of Oaxaca. With the judicious use of cornices and pilasters, the various rounded arches and openings have been integrated into a harmonious classical design. 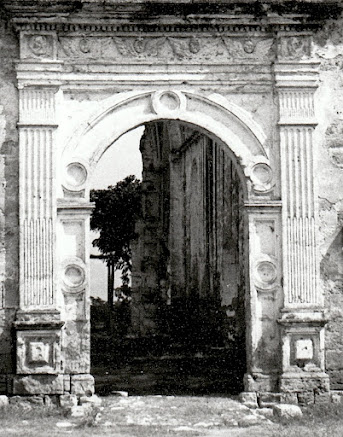 On the lower tier, an elegant Italianate porch of fluted Tuscan pilasters frames the paneled doorway, which is inset with plain Renaissance medallions. Overhead, a frieze of winged cherubs links cameos of bearded saints Peter and Paul?. To either side of the porch are placed large arched niches with stepped frames like the nave windows. 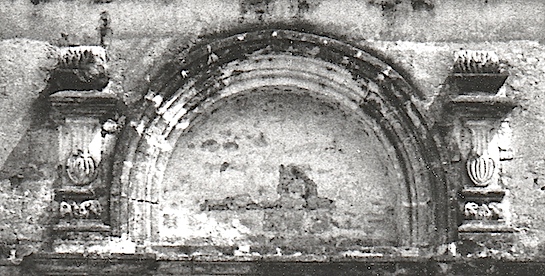 A semicircular pediment rises above the porch, flanked by curious pinnacles carved with vases and grotesque miniature heads, and topped by fruit-and-flower finials. 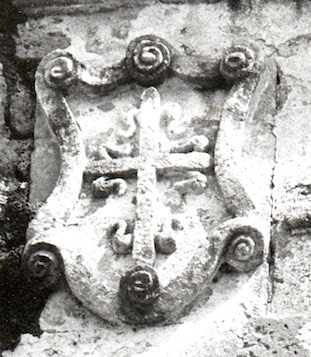 Emblazoned in the corners of the upper facade are two relief escutcheons, encased in ornamental scrolls and carved with the fleur-de-lis cross of the Dominican order.
The once spacious convento has all but disappeared save for a few crumbling archways and stone steps—a victim of the village reconstruction, for which it served as a quarry. 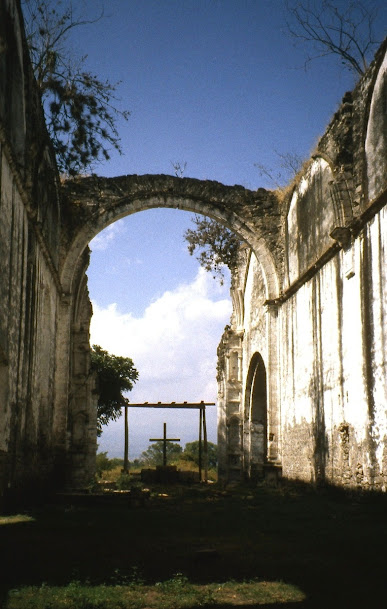 Although the church remains roofless and overgrown, a crude stone altar and benches have recently been set up beneath the gaping crossing—a faint sign of religious revival after the long centuries of solitude.
text and pictures © 1994 & 2022 Richard D. Perry

Posted by Richard Perry at 5:45 PM