For our final post on Coixtlahuaca we look at the convento and its many treasures: 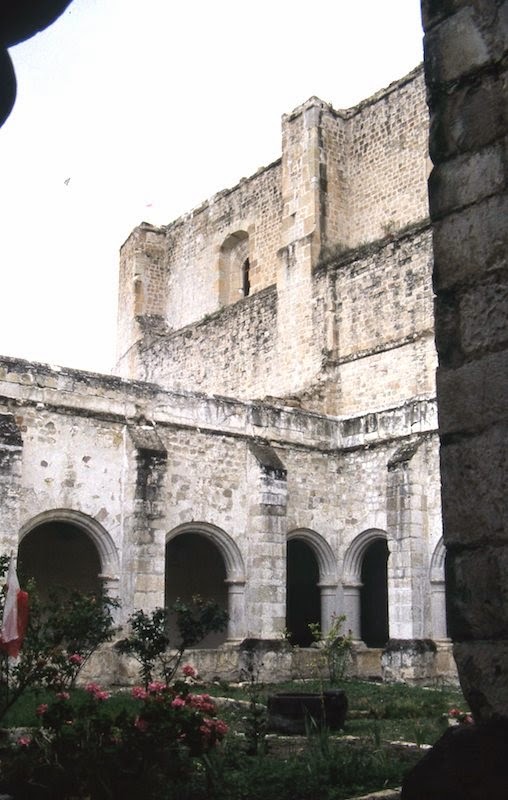 The Convento
The rambling convento, although more modest than its counterparts at Cuilapan or Yanhuitlan, encloses a cloister with a weightier feel.
Only the lower level is now intact, its fluted arches resting on solid piers with attached half columns and plain, squared buttresses. 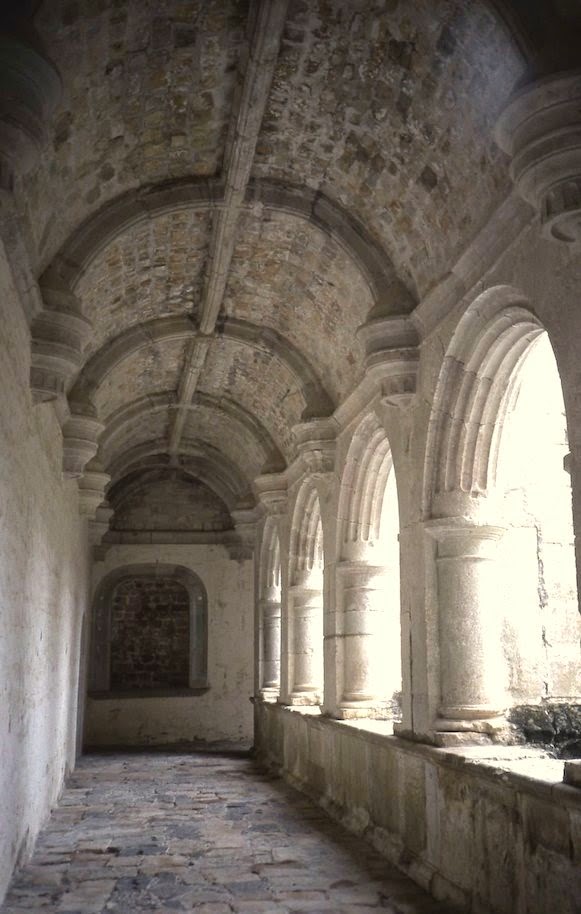 As inside the church, the roof bosses along the ribbed walks are minutely carved with religious emblems: the Lamb of God, the Five Wounds, pierced hearts, stars, books, religious monograms and the Dominican cross.  Any painted images that once lined the walks, however, have disappeared. 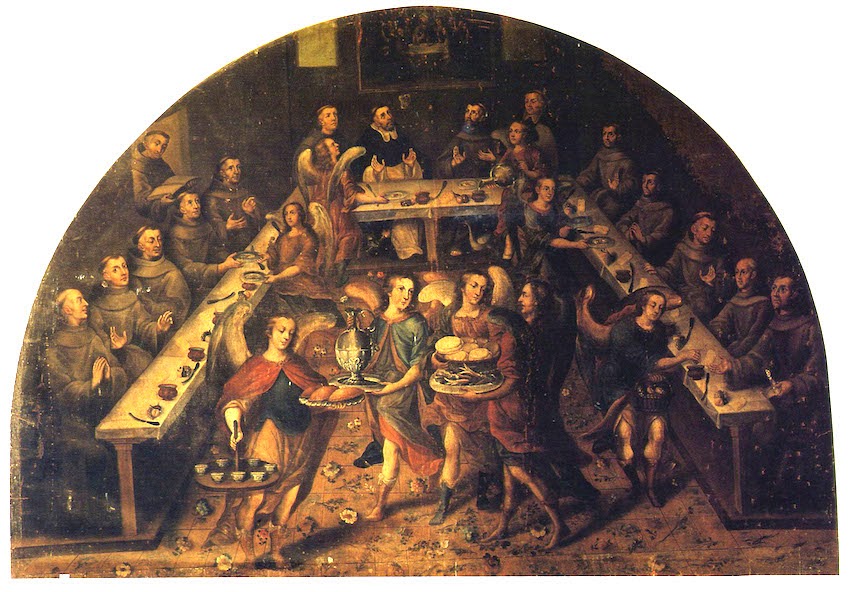 Among the cavernous side rooms is the former refectory. There hangs an extraordinary semicircular painting that depicts St. Francis and St. Dominic at table with Franciscan and Dominican friars, waited upon by archangels.
Painted and signed by the noted Pueblan 18th century artist Pablo Talavera the scene reflects the apparently cordial relations between these usually competing mendicant orders in the Mixteca Alta.
Other colonial works of art are scattered throughout the convento, with old altarpiece statuary, and paintings by Oaxacan artists including members of the noted Zarate family. 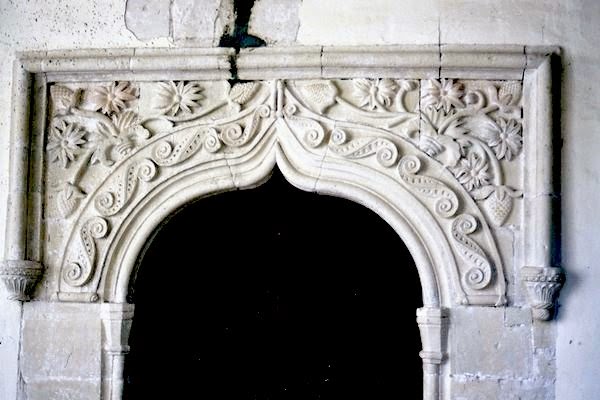 A variety of ornamental carved doorways, several with pointed Isabelline arches and framed with alfiz moldings, enrich both church and convento. 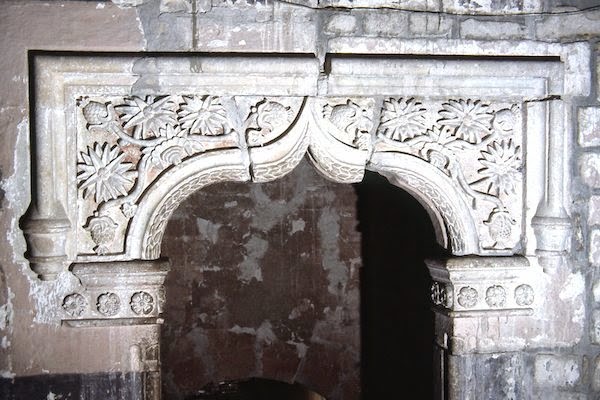 One cloister portal is carved with intricately patterned scrolls and foliage, while another, situated at the top of the stairway to the choir, is surmounted by an assertive candelabra alfiz enclosing a sinuous thistle pattern. 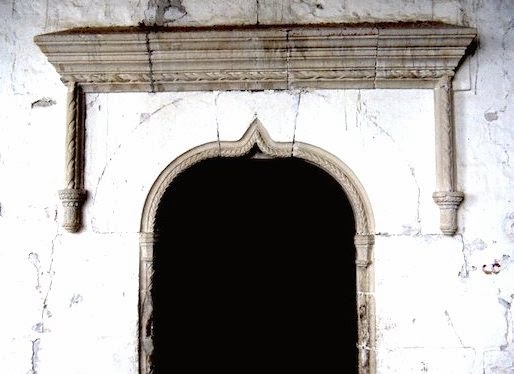 Although the arcades of the upper cloister are missing, the visitor can still explore this level by climbing the baronial stairway on the south side. Much of the rest of the monastery awaits restoration. To the south, little remains but catacomb-like chambers beneath crumbling arcades.
Despite, or perhaps because of its neglected condition, Coixtlahuaca is the least changed of all the early Oaxacan monasteries. In fact, this neglect and the toll exacted by recent earthquakes have rendered the fabric of the church even more fragile. Cracks in the walls and vaults threaten collapse, to the extent that visits to the church and convento had until recently been restricted. Fortunately, remedial measures are under way to assure the integrity of this historic structure.
Today, formerly remote Coixtlahuaca lies just a kilometer or two from the new Puebla—Oaxaca toll road, ensuring easy access. It can also be reached from the old Route 190, via Tejupan—a scenic route through wooded ravines and arid badlands.
The Tecpan
In major mission towns across the Mixteca Alta, the local indigenous nobility played a leading role in early colonial society. The palace of the cacique, or hereditary native lord, occupied a prominent place in the community, politically, socially and geographically.
In Coixtlahuaca, this tecpan—as such buildings were commonly known—occupied its own precinct adjacent to the main square. Damaged and reconstructed numerous times over the centuries, little now remains of this historic structure, save for an anonymous L-shaped complex with Isabelline doorways and a remnant arcade adorned with foliated reliefs. 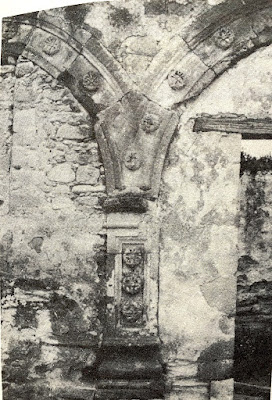 A stone carving of the Spanish royal coat-of-arms, formerly emblazoned on the tecpan facade as at Cuilapan, was recently removed and stored in the convento.