We return to the largest of the lakeside towns, Los Reyes, which boasts Cajititlan’s most imposing church. The parish church of the Three Kings, begun in the late 1600s and completed in the 1770s, was restored to its former glory in the 1960s by Father Luís Méndez, the energetic local priest. 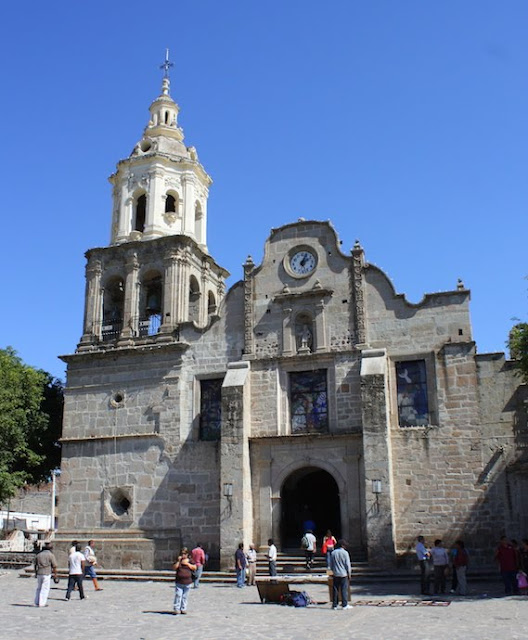 Its wide basilican facade, extended by a massive tower base on one side and the chapel of the Virgin on the other, faces west towards the lake across a huge terraced atrium. The striking church front, recently cleaned and repointed, and the paved atrium are both fashioned from same reflective brownstone, hewn from local quarries. 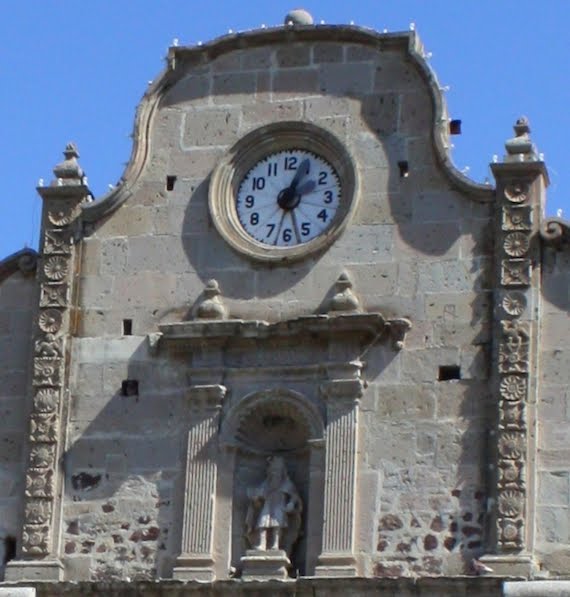 The refaced facade is surprisingly austere with little ornament aside from a decorative moorish style window and a few small reliefs. A youthful statue of Gaspar, one of the Three Kings, stands in the sculpture niche, flanked by pilasters carved with alternating rosettes and winged cherubs. 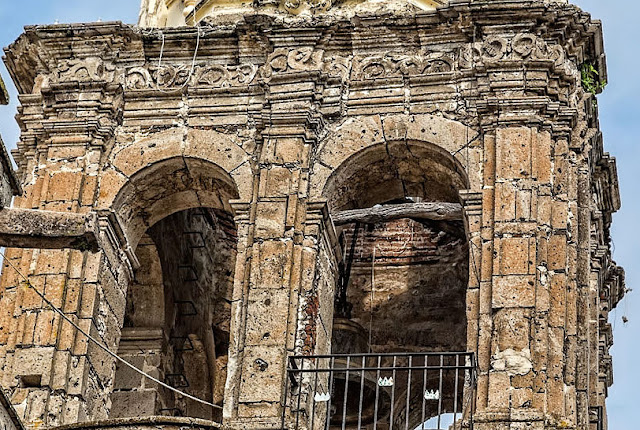 
Inside the aisled church, rows of white columns and a succession of painted vaults lead towards the raised apse—a richly ornamented space, obliquely lit by ornate Moorish side windows and divided horizontally by large, complex foliated entablatures. Carved stone figures of winged angels, bearing musical instruments and the symbols of the Passion line the ribs of the vault—motifs repeated in the other lakeside churches.*  The gilded main altarpiece houses richly robed statues of the Three Kings.
The side chapel also features several charming passages of exterior stonecarving, including animals, flowers and a mariachi of musical angels.
Cajititlan is in its most folkloric mood during the boisterous festival of Los Reyes Magos, every January, when the church is colorfully decorated for Epiphany. The festivities, which come to a climax on January 6th, included masked Nativity plays and indigenous dances performed in the vast atrium, as well as the inevitable fireworks. Bustling market stalls surround the church precincts, where traditional seasonal specialties such as almond tequila and roscas ­—sweet breads decorated red and green, ­ are consumed.
In accordance with ancient tradition, both church and atrium are crowded with the faithful from all over the region, paying homage to the Three Kings, whose statues are lowered from the retablo into the nave for the occasion—a thriving example of cultural continuity in this area of rapid change. 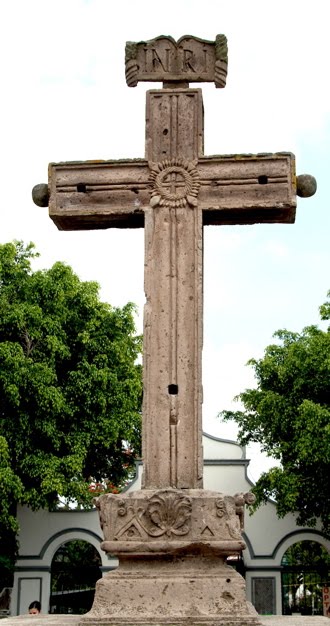 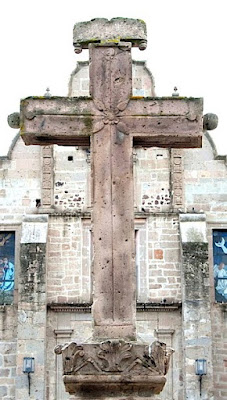 atrium cross.      front                                     reverse side
Another monument of interest is the undated atrium cross mounted in front of the church, fashioned in the cross-within-a-cross pattern common to Jalisco, with a stylized crown of thorns at the axis and wound sockets cut into the shaft and arms. An INRI scroll caps the cross while cannonball finials terminate both arms. The base is carved with shell reliefs.
text © 2006/2019 Richard D. Perry
images by the author except where noted
* visit our earlier posts on the other Cajititlan churches: and Jalisco crosses
Posted by Richard Perry at 11:51 AM