In an earlier post, we looked at the main altarpiece (retablo mayor) at San Miguel Huejotzingo, a masterwork by the Flemish painter and sculptor Simón Pereyns.
This pivotal work marked the stylistic transition from the Plateresque to the Renaissance in Mexican religious art, all the more important as one of only a handful of altarpieces to survive from the 16th century.

However, a pair of smaller, lateral altarpieces, in a style closely related to the retablo mayor, now rest in the later parish church of San Diego Huejotzingo. And while neither is securely dated, their design and detailing strongly support a late 16th century origin for both.
Like the retablo mayor, these Mannerist inspired altarpieces are principally distinguished by their elegant, paired tritostyle columns whose lower thirds are carved and painted with sinuous caryatids and swags. The fluted upper sections taper upwards, festooned with angels' heads and capped by Corinthian style capitals.
Polychrome reliefs fill the broad friezes and predellas of the altarpieces, replete with reclining angels and swags in similar fashion. 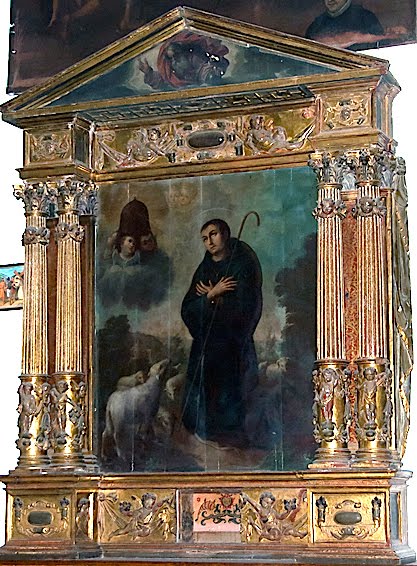 The first retablo is dedicated, like the church, to the Franciscan saint San Diego de Alcalá, and showcases a large painting of the saint portrayed as a shepherd with his flock. 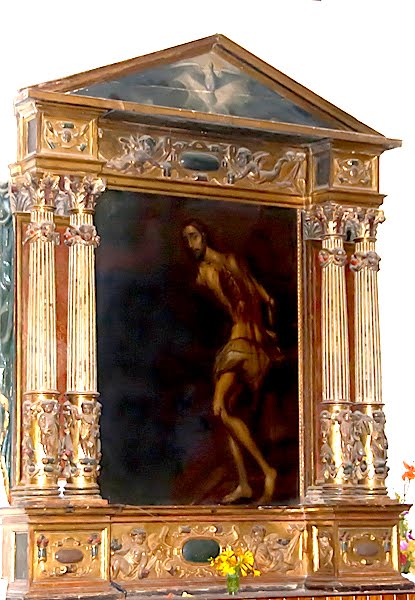 The second altarpiece, almost identical to the first, features a portrait of El Señor de la Misericordia?  It is probable that both of these lateral retablos came originally from the monastery church of San Miguel Huejotzingo, and since they are broadly contemporary with its retablo mayor, it is intriguing to speculate that Pereyns and/or his collaborators also had a hand in their design and construction. 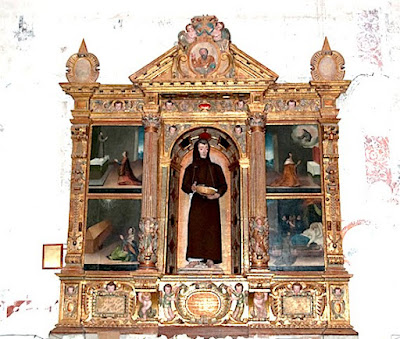 In addition, there is a marked similarity between this pair and a previously mentioned side altarpiece, also dedicated to San Diego de Alcalá, at nearby Cuauhtinchan, another major early Franciscan monastery in the Puebla region.
Since all three appear to date from the 16th century—the only side altarpieces of the period extant in the region—it seems plausible that they were all commissioned at the same time, possibly by the same patron and further, even executed by the same team of designers and craftsmen.

Look for our other posts on Huejotzingo: The Posa chapels; The Main Altarpiece; The North Doorway; The Talavera painting; The Church Murals; The Convento Murals;
Posted by Richard Perry at 1:37 PM