We follow our series on eastern Yucatán* with a look at two early missions nearer to Mérida the colonial capital to the west.
The rambling old mission of San Bartolomé at Opichen is an odd assemblage of incongruous elements. 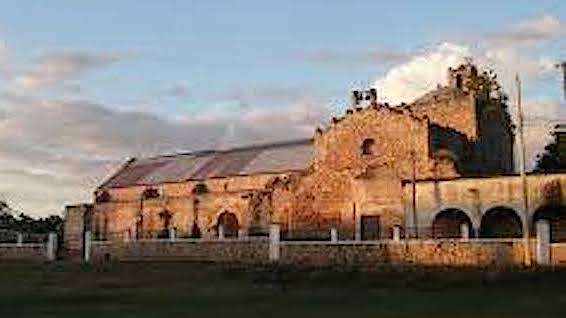 The plan is that of a typical country mission, with a modest church attached to an earlier 'visita' chapel. 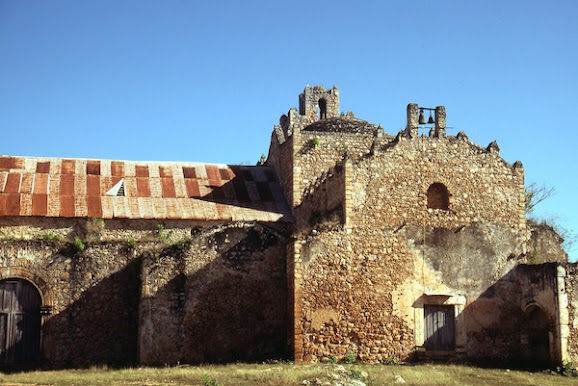 At the east end, looms the high, domed sanctuary/with an unusual narrow bell tower rising above the north wall. This was undoubtedly the original open chapel of the mission, probably built towards the end of the 16th century.
The nave was added to the west with substantial masonry walls, pierced with octagonal windows on the north side. 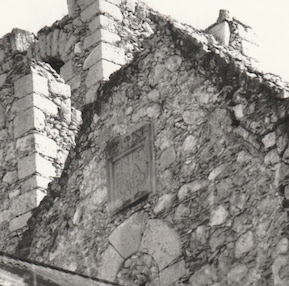 The church has a steeply pitched gable indicating an original thatched roof, but is now covered with a tin roof set much lower than the original, revealing an inscribed plaque over the sanctuary, apparently dated 1830 (possibly 1630).
There is no trace of the old open chapel arch however., only the ashlar frame of a small window cut into the wall below the plaque.
This fact, together with the large chapel attached to the south side of the sanctuary with its carved doorway and upper belfry, suggests that the main nave was abandoned in the 19th century, with the sanctuary and side chapel modified to serve as the entire church. This is not uncommon in Yucatan, for example at Tinum and Piste and may indicate population movement or decline following independence. 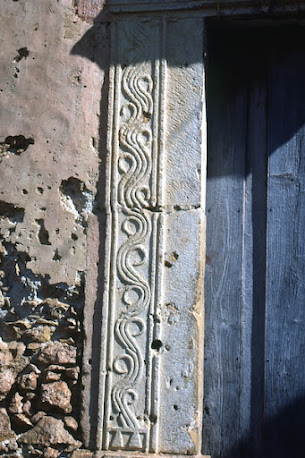 decorative door jamb south side
Opichen is unusual for the appearance of fine masonry work incorporated into what was otherwise a modest village mission. In addition to the elegant carved inscription, there is a Doric colonnade of unknown purpose running east from the south east corner of the church. 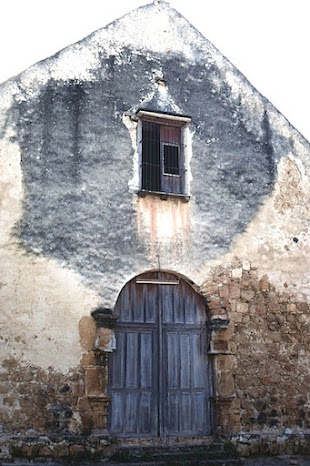 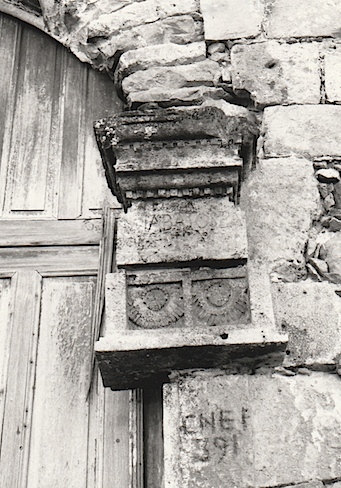 Several beautifully carved capitals and pedestals with stone angels heads adorn the west porch, reminiscent of nearby Chocholá.
These however, appear out-of-place, haphazardly added to the older fabric of the mission. The presence of these carving may even indicate a previous location.
Parts of the church have been restored: re-pointed at the
corners with ashlar blocks which may have come from the nearby
Maya ruins at Oxkintok.
Nevertheless much of the mission remains in poor condition. The roof leaks, and vegetation grows from the cracks in the old chapel block
It is to be hoped that the ravages of time and neglect will be halted
before this curious monument falls into irreparable ruin.
* Espita; Tixhualatún; Popolá; Cansahcab; Temax; Telchac;
text © 1984/2021 Richard D.Perry
images © by the author

Posted by Richard Perry at 4:00 PM