In our books, web pages and blog posts on Yucatán we have mentioned a few of the numerous and varied haciendas of the peninsula and their chapels. Here we visit one of the most interesting and picturesque examples: Hacienda Tabí. 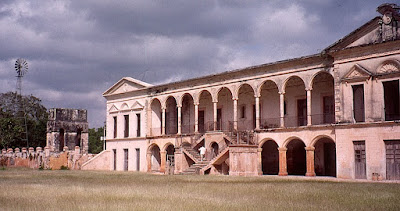 Large estates, or haciendas were numerous in Yucatán, especially in the populous northwestern area of the colony. Originally founded for the raising of cattle and later in the colonial period, sugar cane, by the late 1800s and into the 20th century dozens were founded or converted to the production of henequen fiber from the agave plant—green gold—a crop well suited to this arid region.
Several of the largest haciendas belonged to a handful of prominent local landowners, notably the extended Peón family, whose estates included those at Uxmal, Uayalceh, Xcanchakán and Tabí.
As noted, in the absence of hotels during the colonial era and into the 20th century, these haciendas also served the needs of elite travelers and foreign explorers, including the Empress Carlota, John Lloyd Stephens, Frederick Ober, Henry Mercer, Thomas Gann, Sylvanus Morley and Robert Stacy Judd among many others, often providing transportation and labor in addition to food and lodging.

The vast sugar hacienda of Tabi, in the Puuc hills of western Yucatan, was one of the grandest. Even within living memory Tabi was well known to travelers as a hospitable refuge on the edge of the "wilderness."
Founded some time in the 1600s as a cattle ranch, it was expanded over the next 200 years, often at the expense of Maya communal lands, to produce field crops. In 1855 it passed into the hands of the Peon family who converted the estate to plantation agriculture, principally sugar.
With the decline of the sugar industry, and then the decline of henequen boom after 1900, the hacienda rapidly declined and by mid century was largely abandoned.

The present imposing main house, or Palacio, of Tabí, with its grand arcades and double stairway was added during the Peon ownership period. The facade was rebuilt again in the early 1900s, shortly before its abandonment as a functioning hacienda, its lands then sold off after the Revolution.

Although long neglected, the mansion is now owned by the state and is being refurbished as an educational facility. 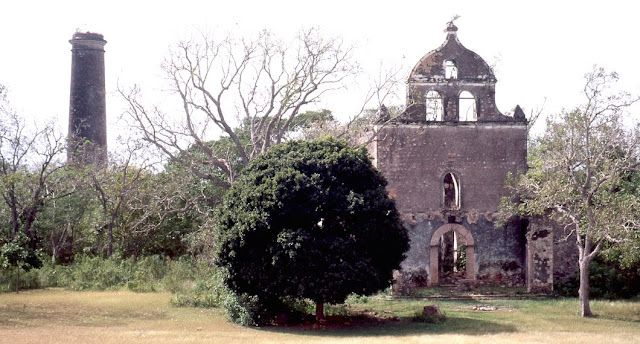 However, the imposing hacienda chapel opposite remains abandoned, roofless, overgrown and neglected. 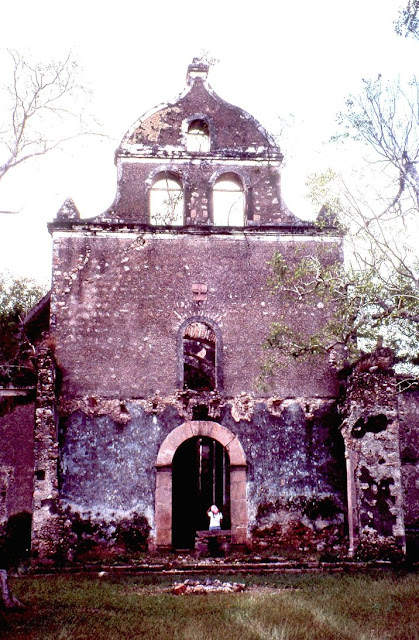 Dedicated to John the Baptist, the chapel building is late—dedicated in 1896—but designed in classic Yucatecan style with a tall but plain front with simple arched openings and an undulating belfry or espadaña.
Its original marble facing is gone, as are the bells, which once used to mark the daily routine of the hacienda. The wooden altarpiece and statue of the patron saint are also missing.
Elegant arches along the nave, supported a log roof in Yucatecan bovedilla style—unfortunately burned during the 19th century Caste War.
text © 2017 Richard D. Perry. photography by the author and Larry Miller