Until recent times accommodations for travelers in Yucatán were few and far between. Early visitors relied on the hospitality of the large estates or haciendas, which were numerous in the more populous region of northwestern Yucatan.
Originally confined to the raising of cattle and later, sugar cane, by the late 1800’s and into the early 20th century dozens of haciendas were converted to the production of henequen fiber—from the agave plant—a crop ideally suited to the arid climate.

Several of the largest haciendas belonged to a handful of prominent landowners. The haciendas catered to the needs of foreign explorers and travelers, often supplying needed transportation and labor in addition to food and lodging.
Hacienda Xcanchakán was one of several large estates that belonged to the Peón family, leading members of the interrelated Yucatán landowning class and ruling elite. Located near the town of Tecoh, it was originally founded as an encomienda and was one of the most southerly of the great colonial estates. Formerly confined to the raising of corn and cattle, it prospered as a sugar plantation during the early 1800s. Later, it was converted into a henequen estate, a model of industrialized agriculture—another Yucatán boom that flourished briefly from the late 1800s into the early 1900s.

Hacienda Xcanchakán in 1842, after Frederick Catherwood

“It was nearly dark when we reached the stately hacienda of Xcanchakan, one of the three finest in Yucatan, and containing nearly seven hundred souls... The house is perhaps one of the best in the country, and being within one day's ride of the capital, and accessible by calesa [carriage), it is a favourite residence of its venerable proprietor. The whole condition of the hacienda showed that it was often subject to the master's eye, and the character of that master may be judged of from the fact that his major-domo, the same who was attendant upon us, had been with him twenty-six years.”
from Incidents of Travel in Yucatan, Vol. 1 (1842) 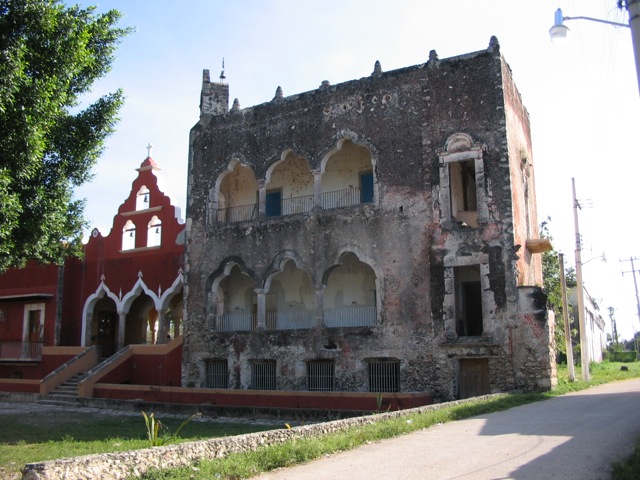 Architecturally, the hacienda buildings reflect its changing fortunes over the centuries. The earliest structures were built using cut stone from the ruins at nearby Mayapan. The original main house, or casa principal, is an impressive three story building, unique among hacienda buildings in Yucatan, with lobed arcades on the two upper levels. 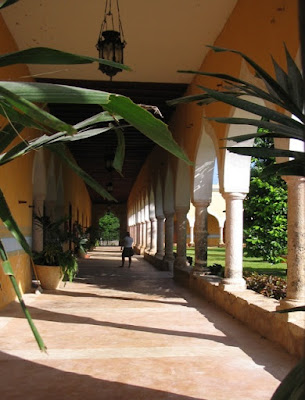 An arcaded breezeway, also with moorish style arcades and a raised belfry, or espadaña, links the main residence to the adjacent noria, or well house. The other side of the casa is faced along its entire length by another attractive arcade.
A range of later industrial structures, including the engine house and vast machinery shed, leads off at right angles. These buildings, now abandoned along with much of their rusting machinery, are extremely plain, with simple arcades and metal roofs. 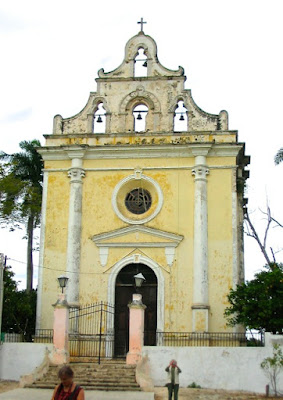 Only the chapel, across the courtyard from the main house, reflects the neoclassical taste of the era in which it was erected (c. 1800), as evidence its pedimented doorway, elegant espadaña and bulls-eye window.
Today, many of these old haciendas are being restored as luxury
inns and resorts for the affluent visitor, including Xcanchakan. 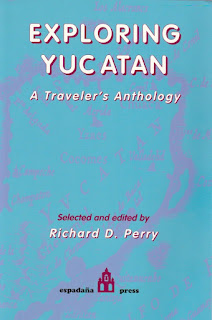 Posted by Richard Perry at 1:42 PM