The Altarpieces of Yucatán: Tecoh

So far, our posts on the altarpieces of Yucatán have focused on two of the better known Franciscan churches of the region—those at Mani and San Bernardino de Sisal.
Forthcoming pages will concentrate on the retablos in some of the less familiar missions of the peninsula, starting with Tecoh. 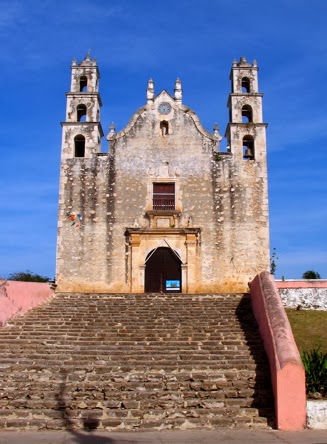 Tecoh
Located just a few kilometers from the ancient walled city of Mayapán, the gigantic fortress church of Asunción Tecoh is set atop a vast former pyramid and approached via a broad stone stairway that once led up to the Mayan temple which the mission replaced.

Although it began with a small stone chapel, established here in the mid-1550s, the Franciscan mission grew rapidly, terminating with the construction of the grand church in the late 17th century. The arched open chapel of the early mission, with its misshapen dome, is still in use as the present sanctuary.

The plain, squared facade is animated by a curved baroque gable, flanked by multi-tiered twin towers in the mold of Mérida cathedral. In addition to the high parapets surmounting the nave, the massive walls enclose narrow passageways, or caminos de rondo, with slit-like openings on both sides that overlook the nave interior and the surrounding landscape.


The principal treasure of the church is its late baroque main retablo that fills the east end.
Similar in style to the main altarpieces of  San Bernardino and Maxcanú, this tall, richly ornamented masterpiece is among the most sumptuous and costly of its kind in Yucatán, painted predominantly red and gold—a favorite regional combination.

Three tiers of elaborately layered cornices and complex estípite pilasters frame a series of four large paintings—unusual for Yucatán where retablos generally feature reliefs or statuary rather than paintings.

The four panels depict St. John the Baptist and three Archangels and are of considerable historic interest.
While being restored, these paintings were discovered to be works dating from the late 1760s by Miguel Cabrera, Mexico's best known baroque painter.  The painting of the Archangel Raphael bears his signature, and these are the only known works by Cabrera in Yucatán. 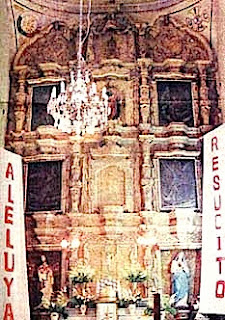 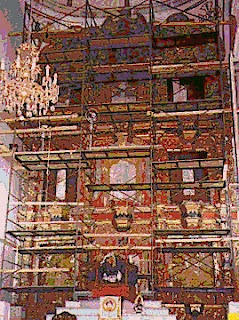 Tecoh, the main retablo: before and during restoration
The altarpiece has recently undergone thorough and much needed renovation—part of the ambitious program of altarpiece conservation all across Yucatán. This program involves restoration work on more than 60 endangered art works, including major retablos at Tabi, Yaxcabá and Sotuta, all of which we feature in this series.
Now restored and reassembled, this magnificent altarpiece resumes its place as the jewel in the crown of Tecoh, and one of finest surviving examples in the region. 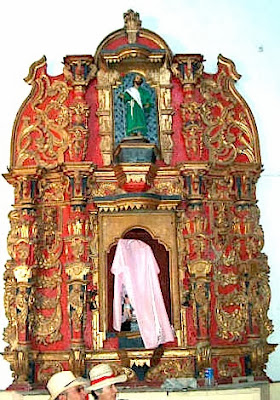 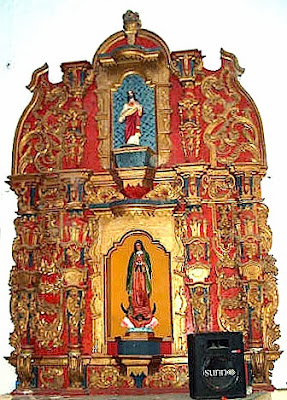 Two Side Retablos
In addition to the retablo mayor, there are five restored side altars at Tecoh, two of which are especially striking. Both are dedicated to the Virgin Mary in her different aspects—one to La Candelaria (left) and the other to La Purísima—and are designed, like the main retablo, in the barroco estípite style, replete with ornate pilasters much decorative scrollwork and finished in classic red and gold.
Both are imaginative and dynamic in their design and ornament and, together with the elegant main retablo, the presence of such sophisticated styling and superb craftsmanship further dispels the notion of colonial Yucatecan art as provincial and inferior to that of the metropolis.
See our map for the location of the retablos in this series


of Yucatán, consult our classic guidebook.
Posted by Richard Perry at 1:08 PM