The Altarpieces of Yucatán: Tabí

In previous posts we looked at the main altarpieces of San Bernardino de Sisal and Tecoh, both fashioned in the late baroque "churrigueresque" or barroco estípite style.
Now we turn to retablos in an earlier, more traditional Yucatecan form: the so called "Solomonic" style, distinguished by often ornately carved, painted and gilded spiral columns—named for the legendary Temple of Solomon in Jerusalem from which they were believed to be derived. 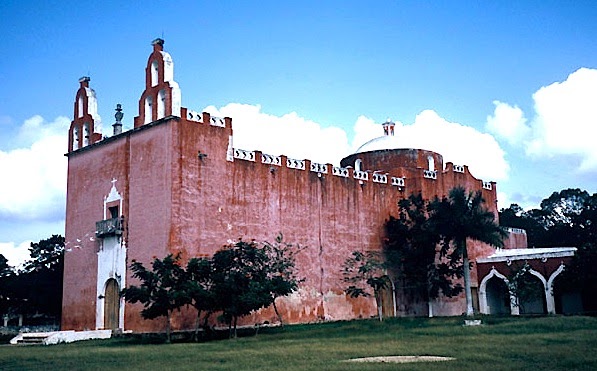 The church at Tabí is a historic Marian shrine* near Valladolid in east central Yucatán, (not to be confused with the well known hacienda of the same name near Uxmal.)
Tabí is home to a remarkable colonial altarpiece.  Located in the apse of the church, this superb retablo features exquisitely carved wooden panels illustrating scenes from the life of the Virgin.  A baroque masterpiece from the early 1700s, it is similar to but, in our opinion, superior to the main altarpiece at the spectacular nearby church of Yaxcabá. 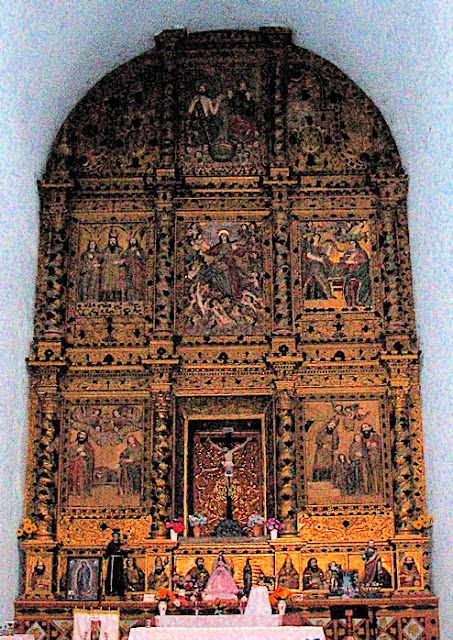 The Main Retablo
For many years this colonial treasure suffered neglect as well as water and insect damage to the point that by the 1990s collapse seemed a distinct possibility. Fortunately plans were soon under way for the stabilization and ultimately, the restoration of this magnificent altarpiece. 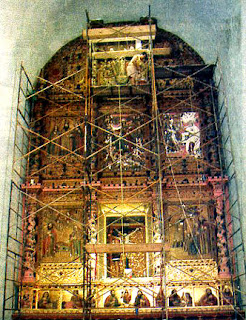 the Tabi altarpiece before and during restoration
Under the direction of Fernando Garcés Fierros of INAH, and with the support of the active Yucatan chapter of Adopte Una Obra del Arte, the project was brought to a successful conclusion in late 2003.
Outwardly spiraling columns wreathed with vines divide the altarpiece and frame the carved relief panels. Once virtually bereft of their original paint, these have now been colorfully restored, together with the red, gilt and blues that distinguish the rest of the structure. 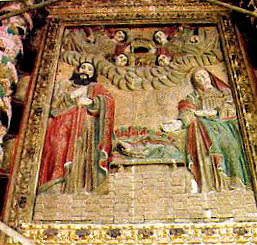 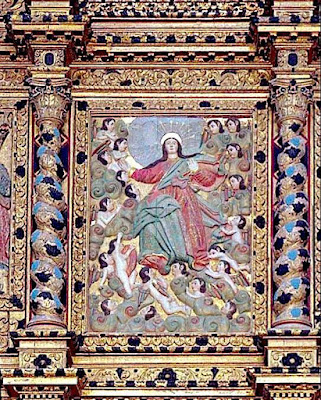 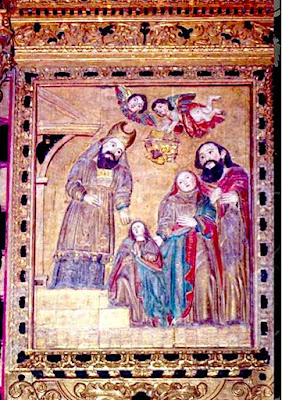 The Tabí altarpiece is prototypical of several principal Yucatecan retablos with large narrative panels composed of gilded and painted reliefs—in this case key scenes from the life of the Virgin Mary, that include an unusual portrayal of the Assumption in the center, in which the Virgin is transported aloft by various cherubs and angels.
This event is flanked by depictions of the Annunciation, her Nativity, the Presentation at the Temple and her Betrothal or Marriage—all portrayed in a vivid and richly detailed popular style.  A relief of the Trinity occupies the crowning pediment. 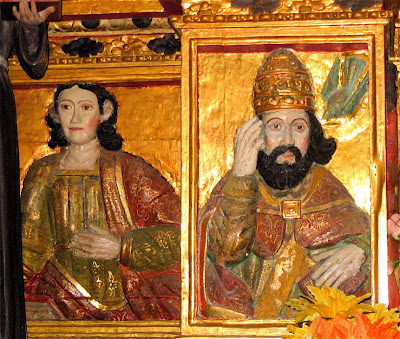 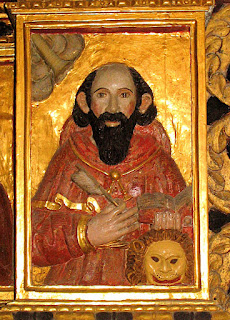 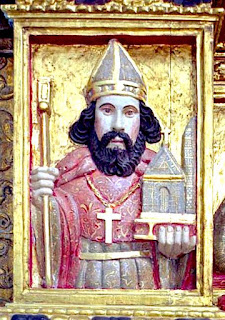 The restored sequence of painted reliefs along the base (predella) of the retablo depict Peter and Paul in the center flanked by the four Evangelists, each with his symbol, and on the spiral column bases, the four Doctors of the Latin Church—all portrayed in a direct and colorful popular style.
* One day in the early 1600s, the astounded villagers of Tabí witnessed an apparition of the Virgin rising from the green waters of the town cenote, formerly sacred to an ancient Mayan water goddess. Soon afterwards, the Virgin miraculously reappeared, this time carrying to safety a horseman whose mount had lost its footing at the brink threatening to plunge him into the depths.
A painted figure of the miracle-working Virgin of the Assumption soon became the focus of a popular cult here, attracting followers from across the region and leading to the reconstruction of the church and an elevated camarín behind the main altar to house the image of the Virgin.
During the 19th century Caste War, the inhabitants fled to Sotuta, taking the image with them. Enraged Maya rebels besieged Sotuta, demanding the return of the Virgin in exchange for the lives of the townspeople. The Virgin was duly returned to Tabí but disappeared for good during the Mexican Revolution. Some claim the image was removed to Mérida and sold, while folklore has it that she was spirited away by the Maya and is still worshipped in some hidden jungle shrine!
Although the Virgin has gone, a cycle of elaborate 18th century murals covers the walls of the camarín behind the main altar, where the statue of the Virgin of Tabí formerly rested, and the lost retablo there has been replicated.

See our map for the location of the retablos in this series
text © 2014 Richard D. Perry.  color photography by the author and Niccolò Brooker

for complete details and suggested itineraries on the colonial monasteries and churches
of Yucatán, consult our classic guidebook.
Posted by Richard Perry at 2:30 PM