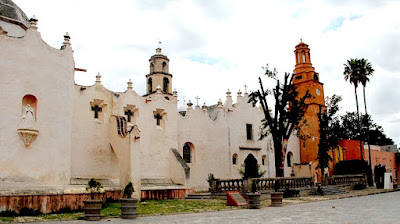 El Santuario de Atotonilco
This rambling pilgrimage church and monastery, located north of San Miguel de Allende in Guanajuato, was founded in 1740 as the site of a religious sanctuary for the Oratorian Fathers, under the activist priest Fray Felipe Néri de Alfaro (Padre Alfaro), a leading if somewhat eccentric figure in the religious life of San Miguel.
The complex was under construction from the 1740s until the end of the century, although “assembled” might be a better term, because of the constant addition of chapels and conventual rooms. However, the main church or Sanctuary, which is dedicated to Jesus the Nazarene, was built and decorated in a sustained burst of creative energy  between 1746 and 1748. 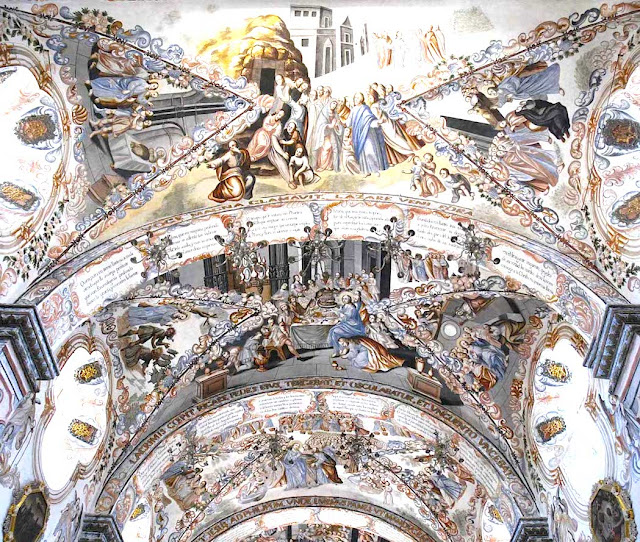 Beyond the carved and painted entry doors lies the densely painted interior, aptly described as a “polychrome grotto” by the Mexican art critic Francisco de la Maza. Many of these murals, hidden beneath coats of whitewash, were uncovered in the late 1900s and have the subject of much study and more recent restoration.
Using the conventions of late baroque painting as a point of departure, the floor-to-ceiling murals are rendered in a colorful, popular but idiosyncratic style.  The dramatic narrative scenes and painted reliefs are integrated with multiple texts composed by the founder Padre Alfaro and exert considerable psychological power.
In addition, their special interest for us is that they were executed in large part by Miguel Antonio Martínez de Pocasangre, probably the best known indigenous muralist of the late colonial period. 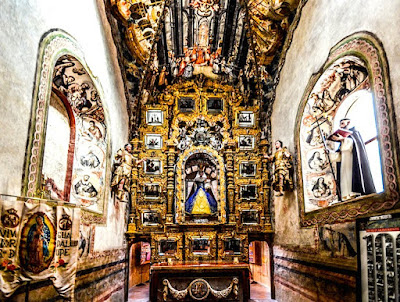 The Rosary Chapel
In this post we focus on what is in our view the most distinctive and indeed unique* mural at Atotonilco, which unfolds across the vault of the diminutive Rosary Chapel, at the eastern end of the nave. 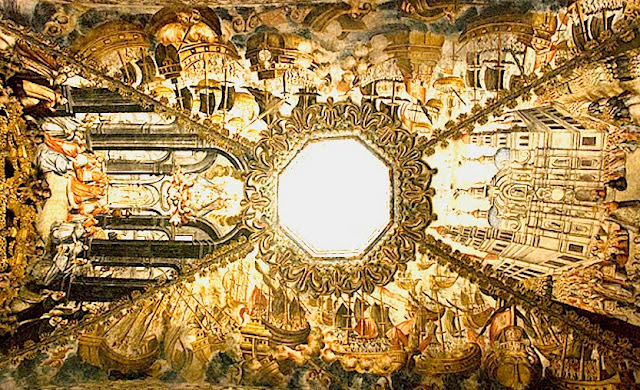 This heroic four part fresco depicts in two sections the naval battle of Lepanto. This famous 1572 victory, in which a coalition of Christian naval forces routed the Turkish fleet off the coast of Sicily, proved a decisive blow against the advance of Islam in the Mediterranean.

Curiously, the ships portrayed are galleons rather than galleys with oars that constituted the greater part of the battle fleets on both sides. 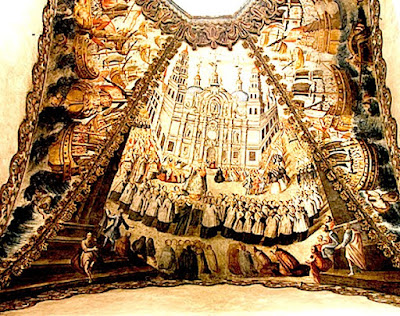 The opposing quadrants of the mural refer to the Virgin of the Rosary, to whom the chapel is dedicated. The Christian victory was attributed to her timely intervention, invoked through praying the Rosary.
October 7th was declared the Feast Day of Our Lady of the Rosary by Pope Pius V on the anniversary of the battle, which explains the exterior and interior views of St. Peter's basilica in Rome.
*To our knowledge, the only other Mexican mural depiction of this battle is part of a portrait of Pope Pius V on one of the pendentives in the church of Santo Domingo in Sombrerete,  Zacatecas: 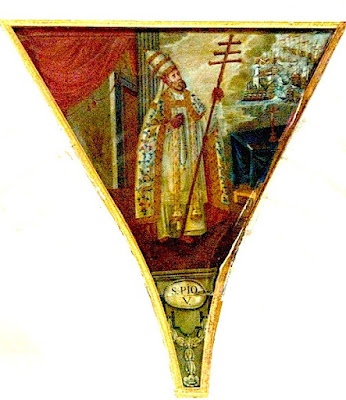