We continue our series on Michoacán crosses of note with a description of the atrium cross at San Pedro Jácuaro. 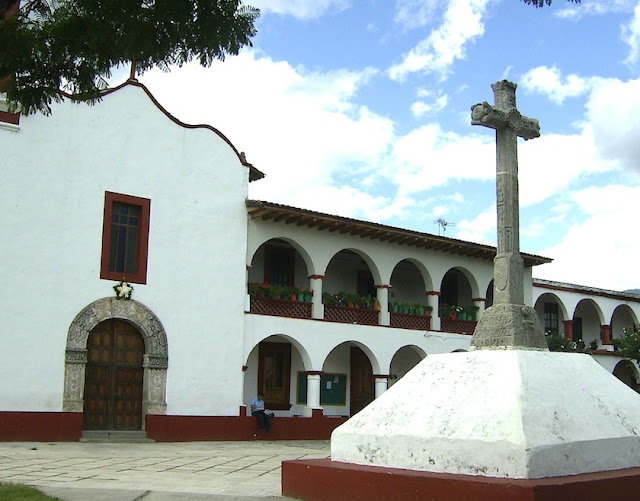 The Atrium Cross
This is an extraordinarily complex and unusual octagonal cross, with numerous inscriptions. Elongated Passion symbols and other motifs are carved into all its facets in an almost geometric fashion.

front;                                                   reverse
On the front, a woven Crown of Thorns motif is carved in bold relief at crossing and may once have framed an inset obsidian disk—as seen at Ciudad Hidalgo and San Felipe de los Alzate.
An especially interesting feature of the cross is its four rosettes placed around the Crown. Composed of a center circle with four outer petals, this pattern, as set here on all four directions, may represent the prehispanic view of the cosmos, with special significance to the stonecarver and his native viewers.
Heart shaped slots are cut into the outer arms, possibly to house more obsidian inserts—now also missing. Simplified, eight-petaled fleur-de-lis finials, incised with crosses on the bulging terminals, cap both arms and surmount the head.
Passion Instruments crowd into the narrow front facet of the tall shaft and include a Hand, a Scourge, the Host, a Rooster atop the Column and a partially effaced profile Head—probably representing Judas. A third heart-shaped recess in the center may also have contained an obsidian plug that, in tandem with the other two, suggests Wounds.

The octagonal shaft is chamfered to become rectangular in its lower section, where a large armorial shield bears a relief of the Franciscan insignia of the Stigmata, again with round recesses in the Wounds. 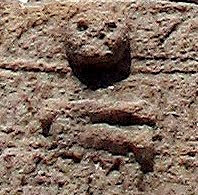 The cross is set on a pyramidal base bearing a complex Spanish inscription on all four sides and carved with a Skull and parallel Bones on the front.

The Reverse
The reverse of the Jácuaro cross is even more surprising. Its crosspiece is inscribed with the words “Jesus Christ” on either side of a monogram of Mary. A Chalice with the emerging Host is squeezed into the narrow center facet of the neck, flanked by the letters I H S.
In the center panels a Corn stalk, Scourge and a slender relief cross continue down the shaft flanked by other Passion symbols on the adjacent facets. A Crown with a large disk like recess like that on the front relief, except more worn, appears unconventionally near the foot. 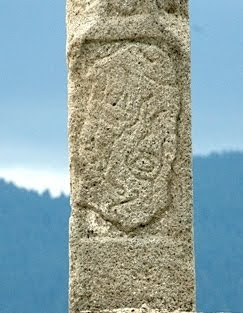 An enigmatic relief on the third facet of the cross resembles a pre hispanic head in profile with ear spools and a feathered headdress. On the fourth face, a box like motif with a cross may indicate Christ’s tomb, possibly derived from the Mass of St. Gregory imagery
text © 2019 Richard D. Perry.
graphics and color images by the author except where noted
Check out our earlier posts on exceptional Michoacán crosses: Uruapan; San Felipe; Huaniqueo;  Angahuan; Zacán; Tarecuato; Tlacolula;  Santiago Charapan;
Posted by Richard Perry at 12:00 PM