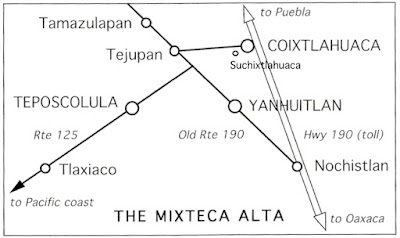 In addition to the larger caches of paintings by Miguel de Mendoza we saw at Suchixtlahuaca and Yanhuitlan there is a scattering of individual works in other major Dominican churches in the Mixteca Alta region of Oaxaca: at nearby Coixtlahuaca (2) Tamazulapan (1) Tejupan (4) and Teposcolula (2)
The splendid baroque main altarpiece at San Juan Bautista Coixtlahuaca is noted for its four panels painted earlier by the celebrated 16th century Andalusian artist Andrés de Concha.
During recent work on the retablo, however, a neglected later panel at the extreme top, depicting the rarely shown and obscure early Christian martyrs Sts Abdon and Sennen, was determined to be by Mendoza and duly signed by him on the back.
Reputedly thrown to wild beasts in a Roman arena, both saints are here richly robed in red, blue and green. Although bearing several  bleeding wounds suffered in the arena, they wear crowns and carry martyrs' palms. Lions and bears lurk in the lower right.
This exceptional painting has been restored by Magdalena Castañeda Hernández.
Another attributable Mendoza painting at Coixtlahuaca, that of the Holy Trinity, is located in the adjacent convento. 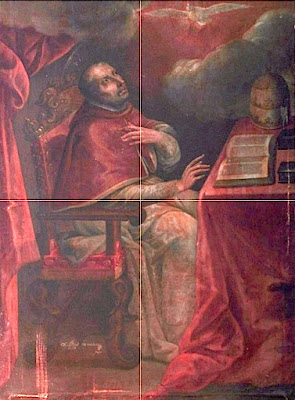 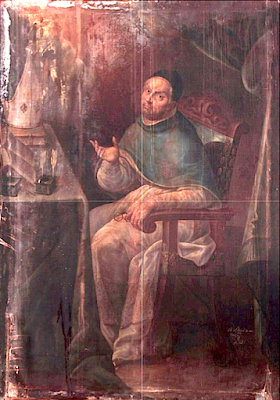 Santiago Tejupan: St. Gregory;  St. Ambrose (Gibran Morales Carranza)
Four unrestored portraits of the Fathers of the Latin Church hang in the sacristy at nearby Santiago Tejupan, formerly part of a now missing altarpiece. Three are signed, Don Miguel de Mendoza.
The prelates are seated on throne like chairs looking out in 3/4 view and surrounded by rich red draperies and vestments.

...........
Finally, another isolated painting of the Virgin of the Immaculate Conception (La Purísima), also signed by Mendoza, resides in the upper part of the superb main altarpiece at Natividad Tamazulapan, which also contains earlier panels by Andrés de Concha.
In a crowded composition typical of the artist's late style, the warm, glowing tones of the massed putti contrast with the swirling blue cloak of the Virgin. 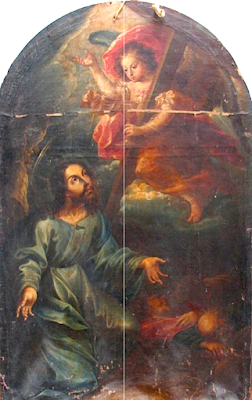 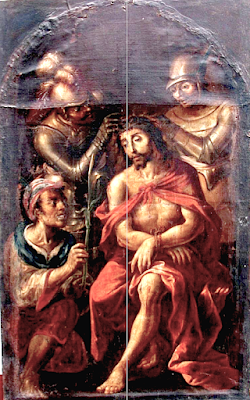 Teposcolula: Agony in the Garden;    The Man of Sorrows (Mireya Olvera)
Finally, in the sacristy of the great Dominican church at Teposcolula, two paintings survive of a series that formerly adorned a now lost? altarpiece of the Passion of Christ.
Again, reds and blues dominate in these elegant but undated compositions that suggest later works of the artist.

Planning a trip to Oaxaca?  Take our guidebook along
Posted by Richard Perry at 2:50 PM