This the first in a series on the altarpieces of the Dominican church of San Felipe y Santiago in Azcapotzalco, in the city of Mexico.
In an earlier post we looked at the main altarpiece at Huaquechula, which features a complete set of paintings by the eminent baroque painter and Mexican native Cristóbal de Villalpando.

Villalpando emerged in the 1680s as one of the leading painters in viceregal Mexico, noted for his daring compositions, dynamic movement, brilliant color and expressive elegance.
Influenced by the Flemish master Rubens, Villalpando's painting exemplifies the luminous Mexican baroque, leavened by the warm, Mannerist inspired Andalusian artistic tradition so popular in Mexico but at the same time reflecting a New World earthiness.
In this post we look at the only other surviving Mexican altarpiece with a complete sequence of paintings by Villalpando, that of the retablo of Sta Rosa de Lima, in the Dominican church of San Felipe y Santiago in Azcapotzalco.
The Paintings
Appropriately, all sixteen painted panels document scenes from the life of St. Rose of Lima—a complete set and still in their original locations within the retablo.
As one of his first major commissions, one that  undoubtedly helped establish his reputation, the paintings are representative of Villalpando's early style—employing simply structured compositions and a palette of cool, somber colors appropriate to the themes illustrated. 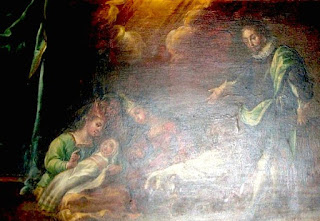 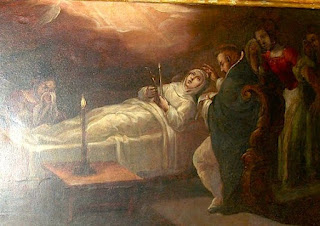 Birth and Death of St Rose

Starting at the lowest of the four tiers of the retablo, the predella consists of four elongated panels that portray the birth, illness and death of the saint, with a scene of her being approached by a well dressed hidalgo (the Devil) These have a popular feeling compared with the more formal panels in the main tiers. 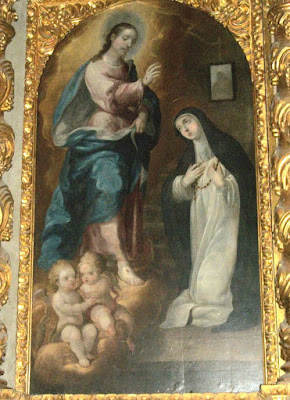 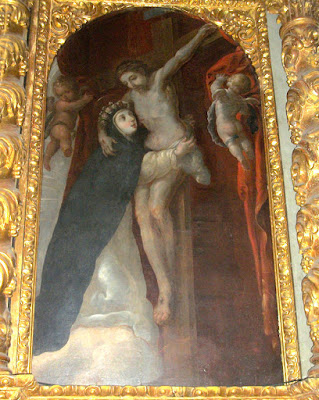 On the first main tier, panels illustrate the saint mortifying her self on the left, and praying on the right. The two center panels portray Christ appearing to her (left) and, on the right, St. Rose embracing Him on the cross. 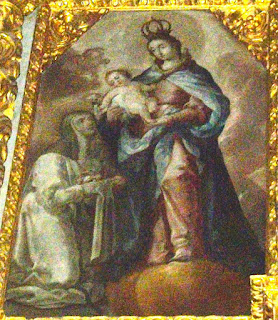 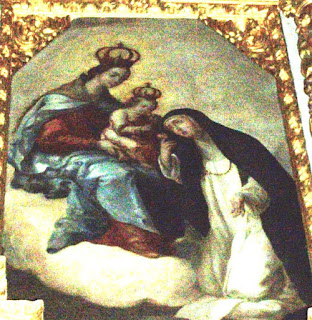 On the next level are two views of the saint kneeling with the crowned Virgin and Child. These flanked by more penitential scenes on either side. 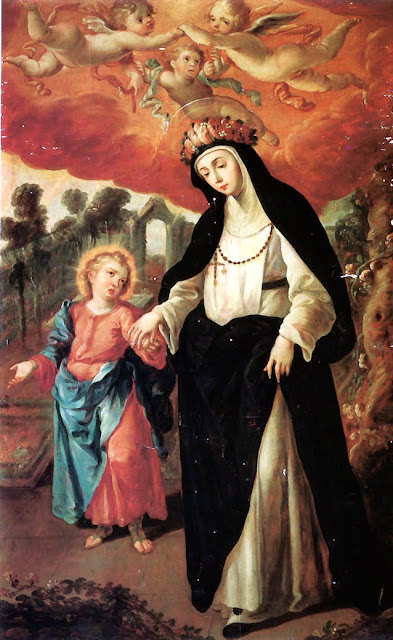 In the center, Rose, crowned with roses, walks with the young Christ, the most luminous and colorful scene among the generally somber blues and grays of the other portrayals.
Paintings along the top tier, include a scene of Jesus presenting the saint with her signature crown of Roses (left) and on the right, a more domestic scene of Rose embroidering a pillow, accompanied by the youthful Jesus and a dove!  In the large center panel, the solitary figure of the saint inside a temple is one of the most striking compositions.
Murals on either side of the retablo, probably of later origin, portray the saint in the celestial company of the Archangel Gabriel opposite the Holy Trinity.
Note: Villalpando painted other major commissions portraying the life of St. Rose of Lima, mostly on behalf of the Dominican Order including altarpieces in the cathedrals of Puebla and Mexico City. Unlike the Azcapotzalco retablo many of these panels have been dispersed. One example, the Mystical Marriage of St. Rose, commissioned by the Dominican Order and incorporating a portrait of St. Dominic, was recently on display in Santa Barbara, California. 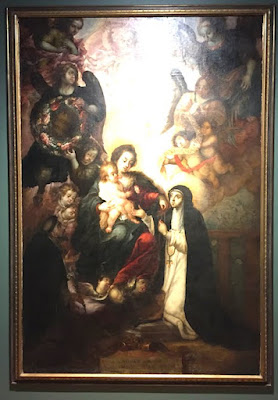 text © 2018 Richard D. Perry
color images by the author and other sources as noted.
Posted by Richard Perry at 10:37 AM