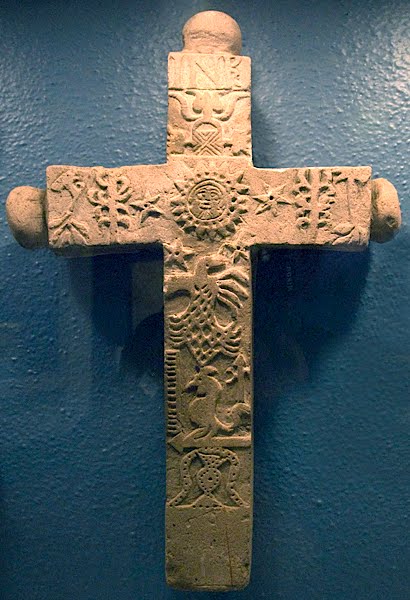 Formerly in the collection of the late Guanajuatan artist José Chávez Morado and his wife, this intriguing 16th century cross now rests in the Guanajuato City Museum (La Casa de Rayas).
Although its origin is unknown, it resembles some stone crosses in the Ixtla region of eastern Guanajuato.
A charming, square sectioned cross of modest size without borders, it is folkloric in draftsmanship and execution, with idiosyncratic iconography and unorthodox representation of the various Passion symbols. 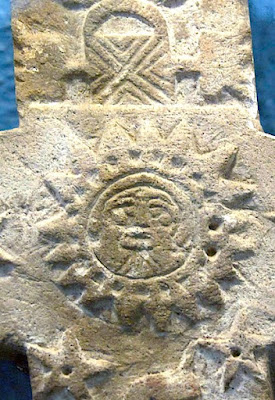 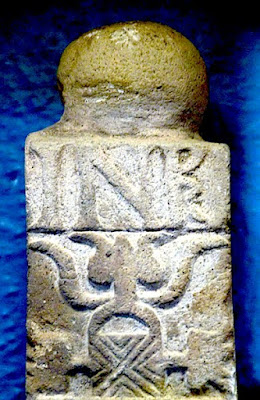 A spiky crown of thorns motif occupies the crossing enclosing a mask-like face and ringed by stars with pierced centers. Corn plant reliefs flank it on either arm with, on the extremities, implements piercing streaming wounds


Above the crown on the neck of the cross, a stylized lantern appears to sprout floral sprays—possibly a representation of the Tres Potencias. A compressed INRI relief is inscribed above and cannonball finials project from the arms and the head of the cross. 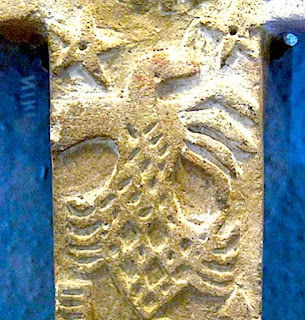 Atop the shaft, a curious, phoenix like bird spreads its wings while below, a rooster stands amid arrow like spikes atop an abbreviated, vase like column trailing woven ropes or ties.

Pieces of silver descend in a column down the left side of the shaft.