In earlier posts we looked at selected Mexican crosses in Michoacán and Querétaro as well as, more recently, several among the Metztitlan visitas.
We follow these up with a new series in which we describe a related group of carved stone crosses located in the southern areas of Mexico City.
Many of these crosses may be traced stylistically to the early atrium cross at Coyoacán, the principal Franciscan monastery of the region. 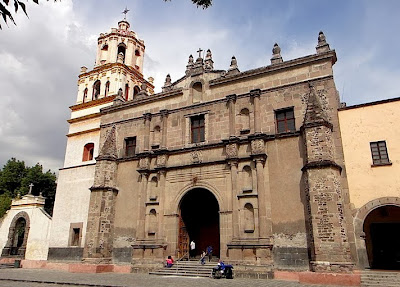 Coyoacán
Place of the Coyote People
The great monastery of San Juan Bautista Coyoacán was one of the largest and most important in the Valley of Mexico, favored by famous local residents, including the conquistador Hernán Cortés, and administered at different times by both Franciscans and Dominicans. 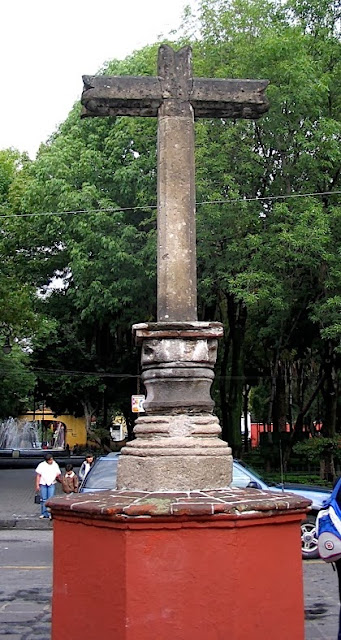 The surviving atrium cross, placed in front of the church, is among the most austere in the area. Mounted on a plinth composed of former column sections, the cross faces away from the church facade towards the extensive Jardín de Hidalgo—the former monastery atrium.

Its basic configuration however, provided a template for other crosses in the southern area of the city,then a loosely connected network of  mission towns and villages—a form that was expanded upon and embellished in numerous regional examples—several of which we explore in our upcoming posts.
While both the shaft and crosspiece are octagonal in section, the head of the cross is a mere stump, terminating, like the arms, in a swallowtail like configuration that prefigures the more exuberant finials that characterize the other area crosses.
Aside from the worn Crown of Thorns at the axis and the Wounds on each arm—little more than holes with metal spikes protruding outward at an angle—there are no other discernable carvings.