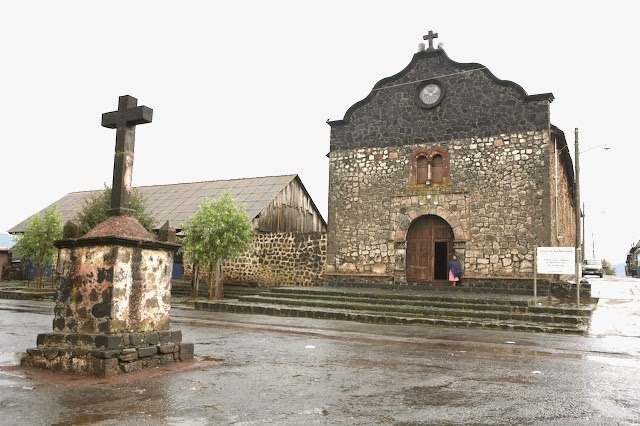 Cocucho
Another mission with a painted ceiling of unique content and brilliant finish in the style of nearby Santiago Nurio can be admired in the rural church of San Bartolomé Cocucho. 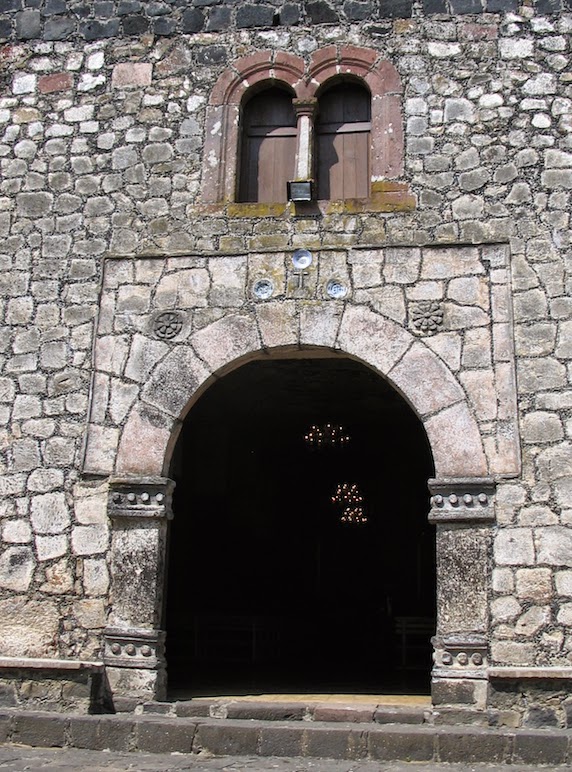 Originally built by the Franciscans in the late 1500s, the church retains its imposing 16th century entry with pearl studded jambs and a surmounting alfiz.
The church was later substantially remodeled starting in the 1760s when the wooden ceiling was added or replaced.

As at Nurio, the painted artesonado section is confined to a modest span beneath the choir. Recently restored to sparkling condition, these highly ornate and unusual murals are brightly colored in reds, greens, blues and a range of earth tones.
The Santiagueria
The extraordinary, animated center panel depicts Santiago Matamoros, the warlike patron saint of the Spanish conquest, posed astride a white steed with raised sword and banner.
Smiting Moors or heretics, who are shown in Spanish dress and in various stages of dismemberment, the saint is accompanied on the left by kneeling Spaniards discharging muskets and praying.
The figure holding a musket beside a bishop’s crozier is believed to represent one José Cayetano Vital Montezuma, an encomendero of Cocucho and a militant champion of the Counter Reformation who later became a controversial bishop in Chiapas.
On the left, soldiers enter a burning building—a possible reference to the legendary Battle of Clavijo of 844 AD, in which Spanish forces routed a Moorish army with the assistance of St. James (Santiago) who appeared in the heavens to urge them on to victory.
In the clouds above him, The Virgin Mary appears as La Purísima, clothed in a blue robe with black shoes and surrounded by winged cherubs, appealing to the Holy Trinity—a youthful Padre Eterno at center with Christ on his left.
All the figures, including the vanquished are handsomely costumed in 18th century style.  Since Vital Montezuma became bishop of Chiapas in the late 1760s, this mural no doubt predates his departure and is thus one of the earliest in Michoacán.
This santiagueria as it is known, is a spectacular tableau, unique in the mural art of Michoacán. 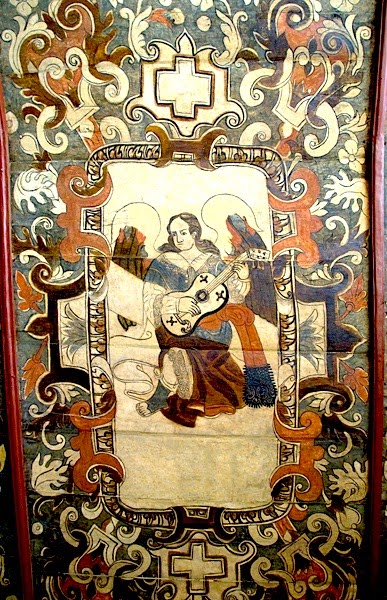 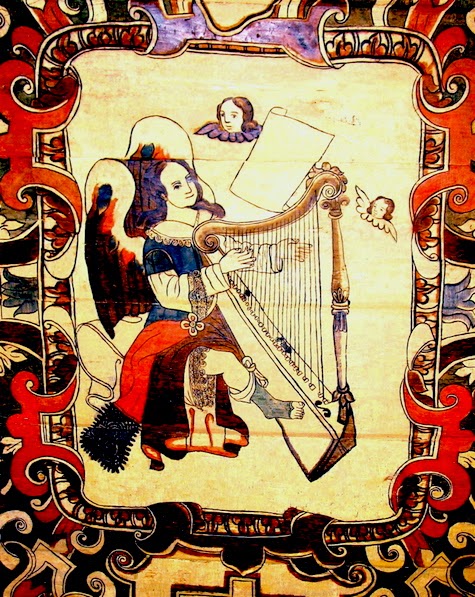 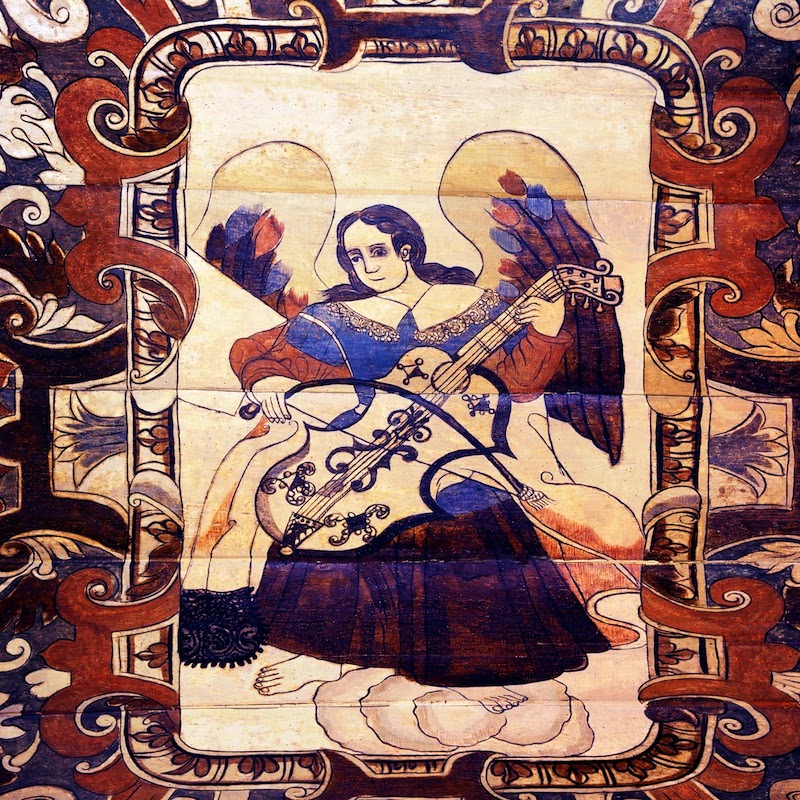 In contrast to the strident center panel, the flanking sections of the under choir portray six fine featured angels, encased in elaborate frames with painted strap work.
As at Nurio the angels, some richly arrayed in elaborate buskins and brocades, play a wide variety of colonial musical instruments: strings are portrayed on the left (south) and wind instruments—horn, bassoon and chirimia flute—on the right side (north)—reflecting the musical practices of the time.  Some of the panels include now mostly blank music sheets. 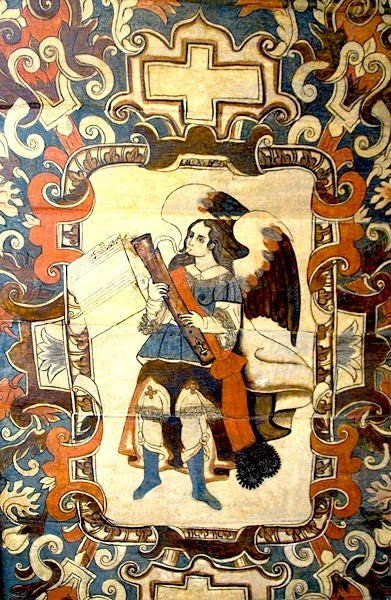 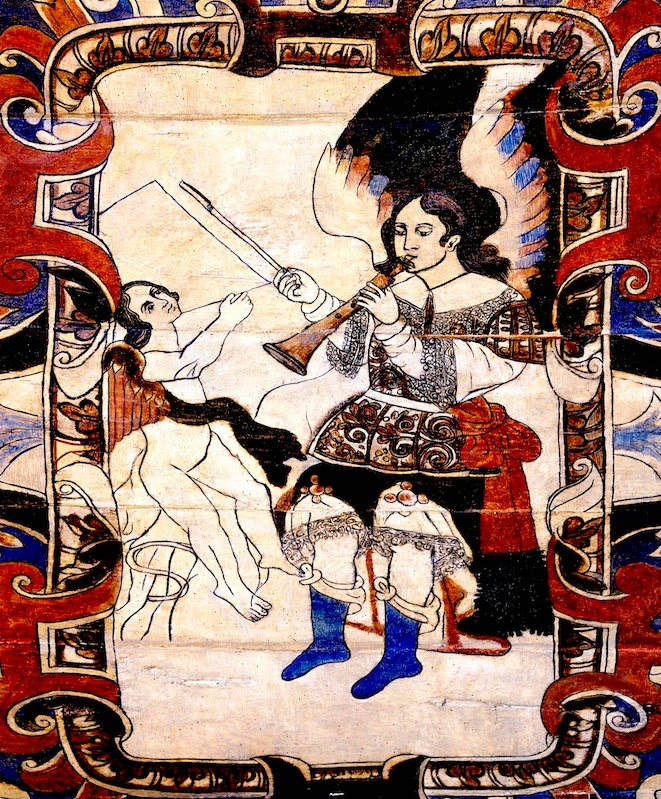 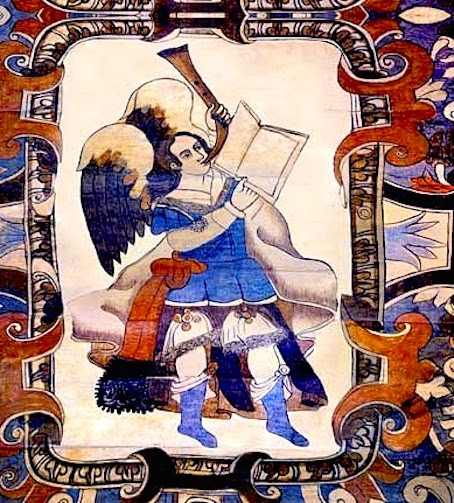 Text © 2014 Richard D. Perry.
Images by the author and courtesy of Carolyn Brown and Niccolò Brooker
Based in part on research by Robert Starner.

For a recent compilation of moving images of the people and churches of the Meseta Tarasca region, including Cocucho, check out this video by Quin Matthews, who accompanied the author on one of his journeys through Michoacán


We accept no advertising. If you enjoy our posts you may support our efforts
by acquiring our guidebooks on colonial Mexico.
Posted by Richard Perry at 2:07 PM