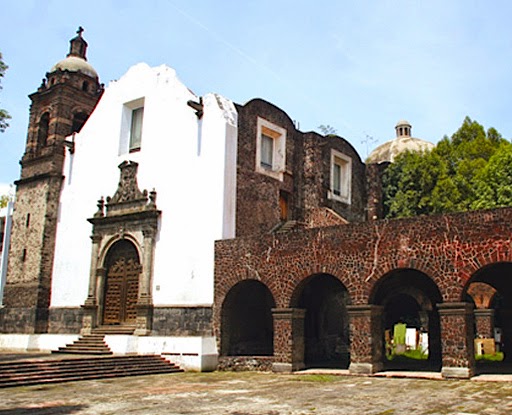 The only documented stone retablo in Mexico City is that in the former church of San Pablo El Viejo, located in the historic Merced quarter of the city—reputedly originally founded as a barrio chapel by the pioneering Franciscan Pedro de Gante.
After secularization and abandonment in the 1800s, the 16th century church was used as an adjunct to the adjacent Hospital de Jesus before narrowly escaping demolition in the 1900s.  Following repairs and strengthening, the nave is now used as the hospital auditorium.
The retablo reportedly remains in place and takes the form of ornamental stone relief decoration against a side wall of the nave.
Because the wall supplies the essential structure, aside from the arcade in front of the center niche there are no traditional support elements in the design. As a result the retablo might be classified stylistically as an example of the highly decorative anástilo phase of the late baroque.
(updated photograph to follow)