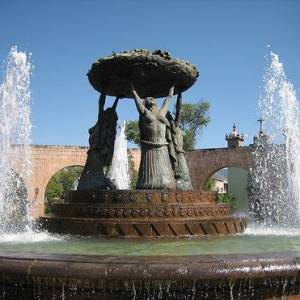 The eye-catching fountain of the Tarascan Women, a heroic monument carved in blinding white limestone, invariably draws visitors to the Plaza Villalongin, located at the eastern end of the Avenida Madero in downtown Morelia. 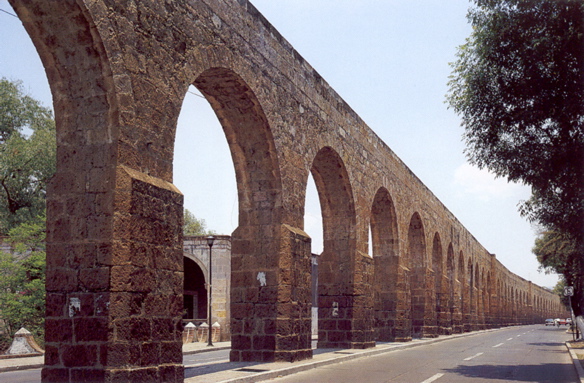 The fountain is still fed by a magnificent colonial aqueduct. It was built in the 1780s by a Franciscan bishop, whose name is commemorated by a broad cobblestone walk lined by shade trees, known as the Calzada Fray Antonio de San Miguel, which runs alongside the imposing Roman style arcades of the aqueduct.
Its 253 arches run for almost a mile across the city bringing water from the hillside springs of El Rincón and San Miguel, some 8 kms distant. 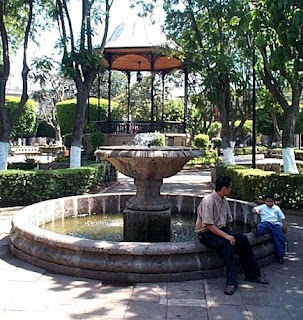 Several fountains adorn the churches and plazas of Morelia, but the earliest and most elegant is that in the convento of San Agustín.

San Agustín is among Morelia’s earliest churches, its imposing front dating from around 1600.
The condensed Latin frieze on the facade quotes Genesis: “This is the House of God, the Gate of Heaven. Happy are those who inhabit it giving praise perpetually.”
Unfortunately, the adjacent convento, with its robust Roman colonnades and medieval Isabelline windows, is in a less than happy state, currently a run down school of the arts.

The splendid 17th century fountain that dominates the cloister patio is also in poor condition. Its elegant stonework is chipped and much battered stone lions still stand on each corner.

for more on the colonial arts of Morelia and Michoacán, see our guide book

Posted by Richard Perry at 9:18 PM