The Altarpieces of Yucatán: Conkal 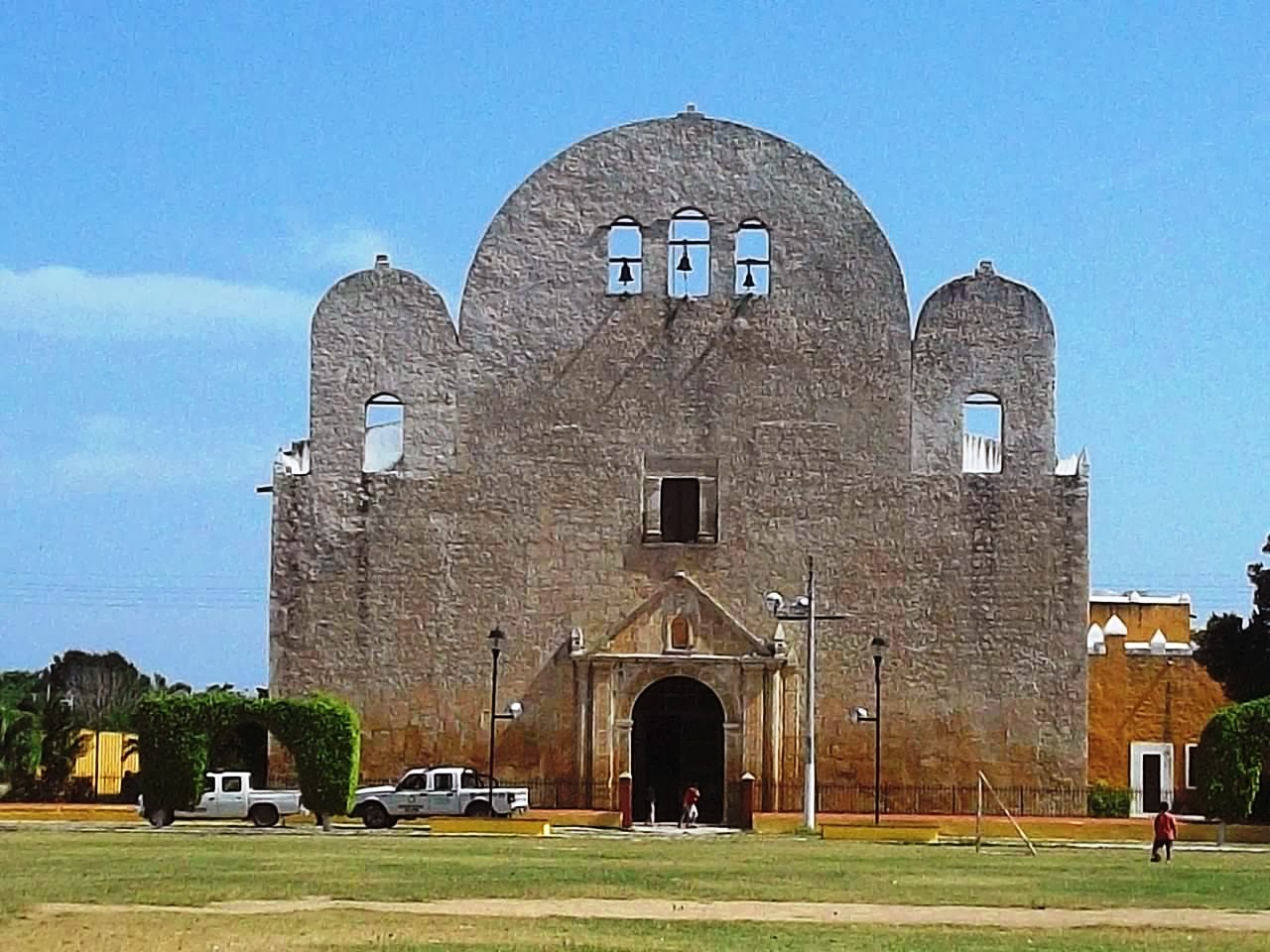 CONKAL
Place of the Stone Building
Located a mere 18 kilometers from Mérida, San Francisco Conkal was founded in 1549. In 1550 Fray Diego de Landa, then only 26 years of age and at the beginning of his controversial career, became Guardian.

Early in the 1600s, Fray Gerónimo de Prat, a prominent Franciscan architect, started work on the permanent stone church. The exterior is severe, its sheer nave walls topped by rows of heavy merlons. The imposing south-facing facade, also plain, with its high, arching pediment and matching rounded belfries, radiates a primeval sculptural strength. The lower facade forms an intricate patchwork of stone mined from the ancient Mayan “stone buildings” in the vicinity.

The simple, pedimented porch is closely related to the doorway of La Mejorada in Mérida, with an arched doorway and flanking pilasters incised with geometrical motifs. Its triangular pediment encloses the Franciscan arms. 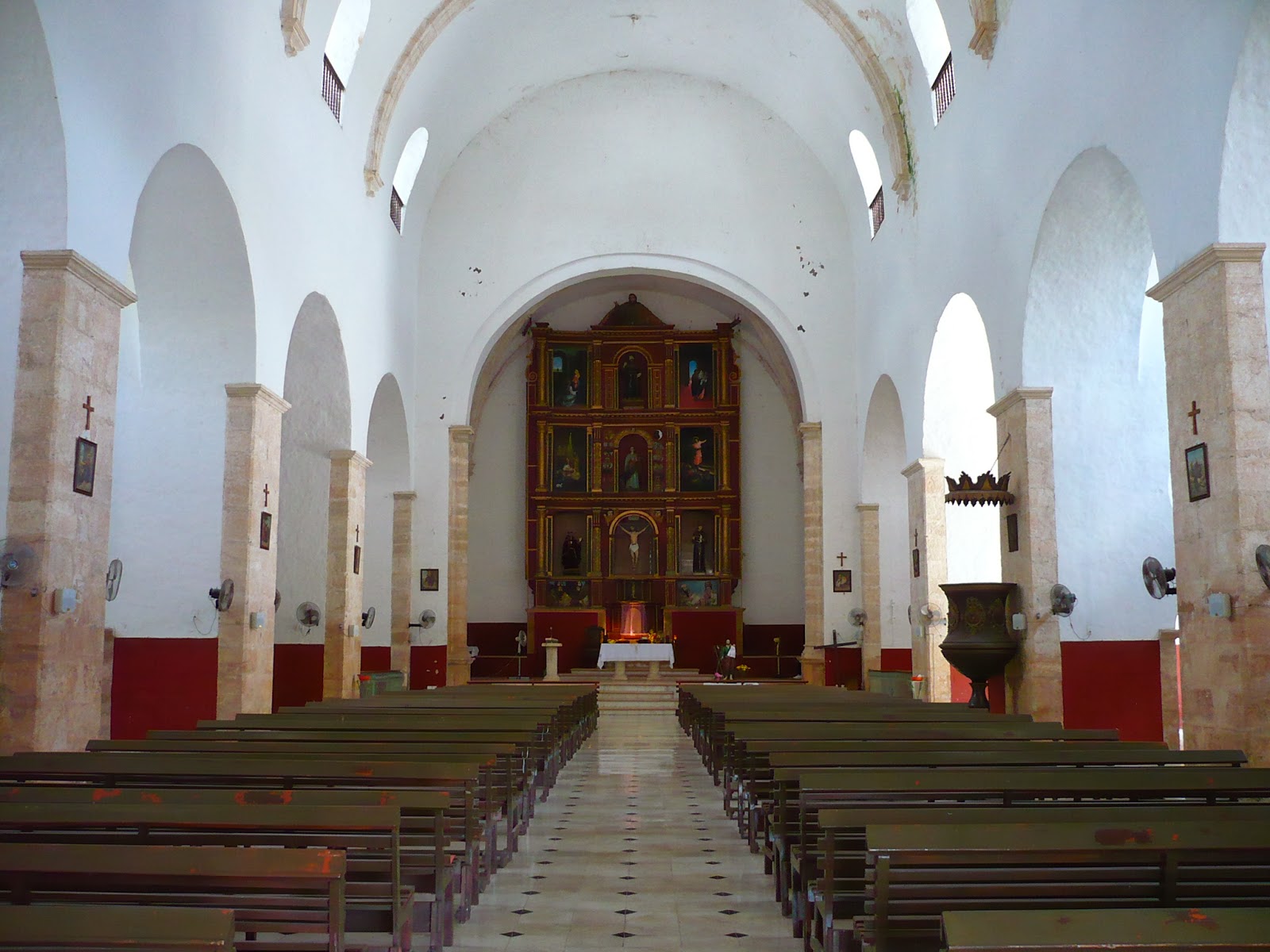 Thick interior buttresses between the bays along the nave are pierced by low arches and bold circular openings above, giving the whitewashed interior a cool, sculptural look. The vaulted 16th century open chapel now serves as the sanctuary and houses the large main altarpiece. 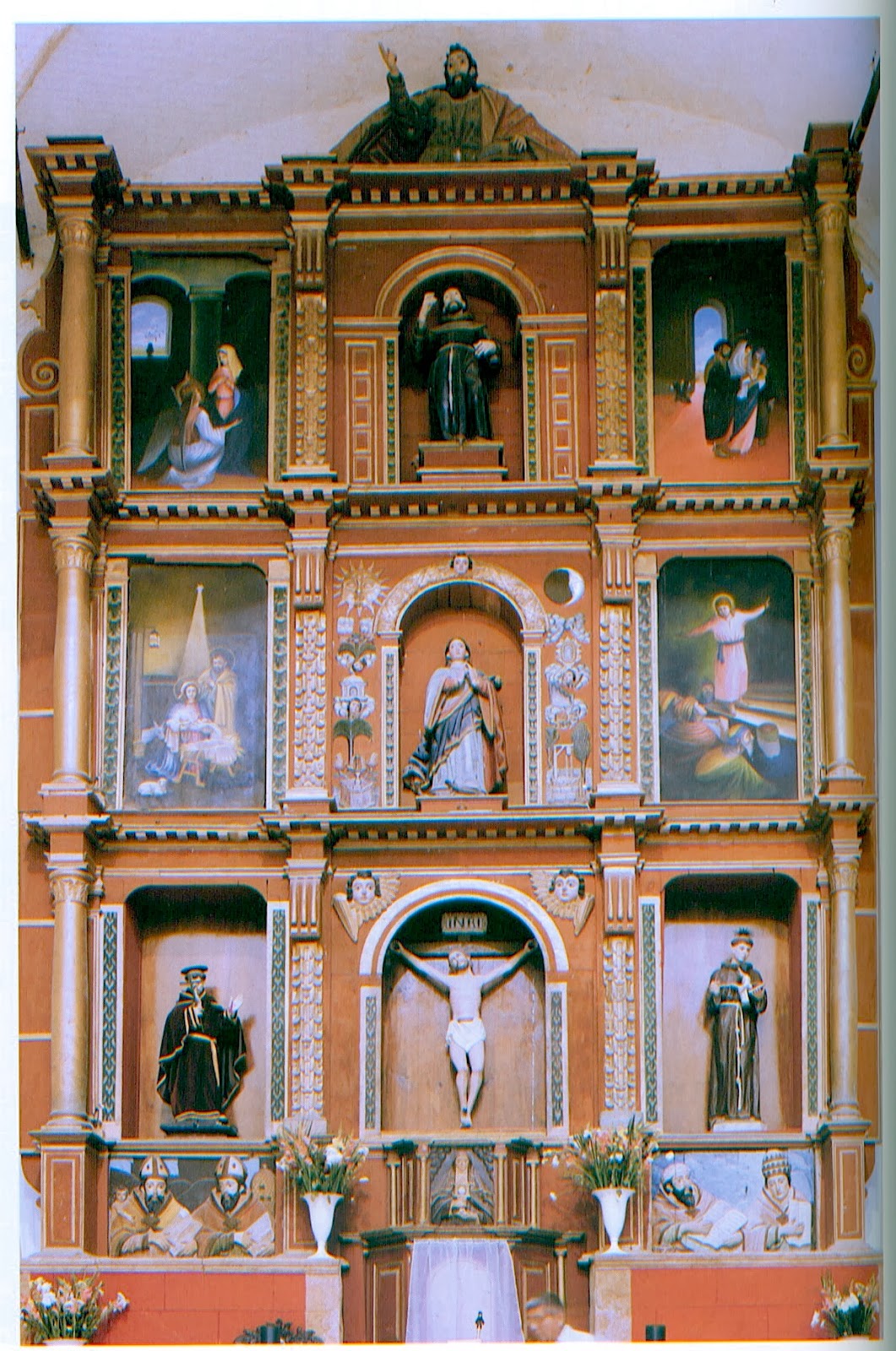 The retablo mayor is of uncertain date but in an austere, rectangular format, its triple tiers framed by slender, gilded columns and neoclassical pilasters against a burnt orange background. The crucifix on the lower tier is flanked by statues of Franciscan saints. 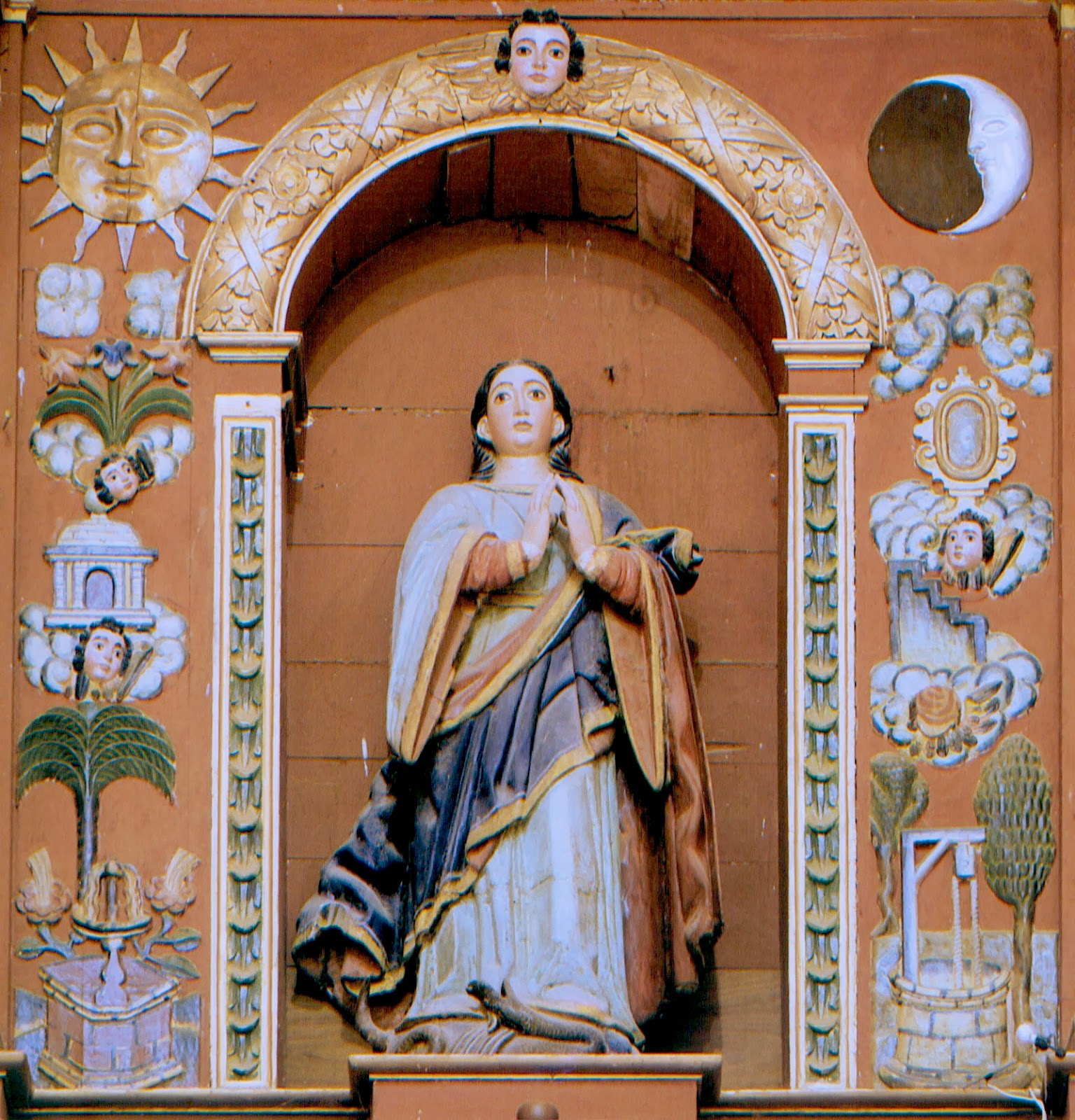 A doll like statue of La Purísima with Mayan features appears in the center niche flanked by reliefs of her traditional symbols. Modern paintings of scenes from the life of the Virgin Mary, depicting figures in unusual architectural settings, surround the statue of patron St. Francis in the upper niche.
Elsewhere, God the Father gestures from the surmounting pediment, while portraits of the Doctors of the Church adorn the basal tier, or predella. 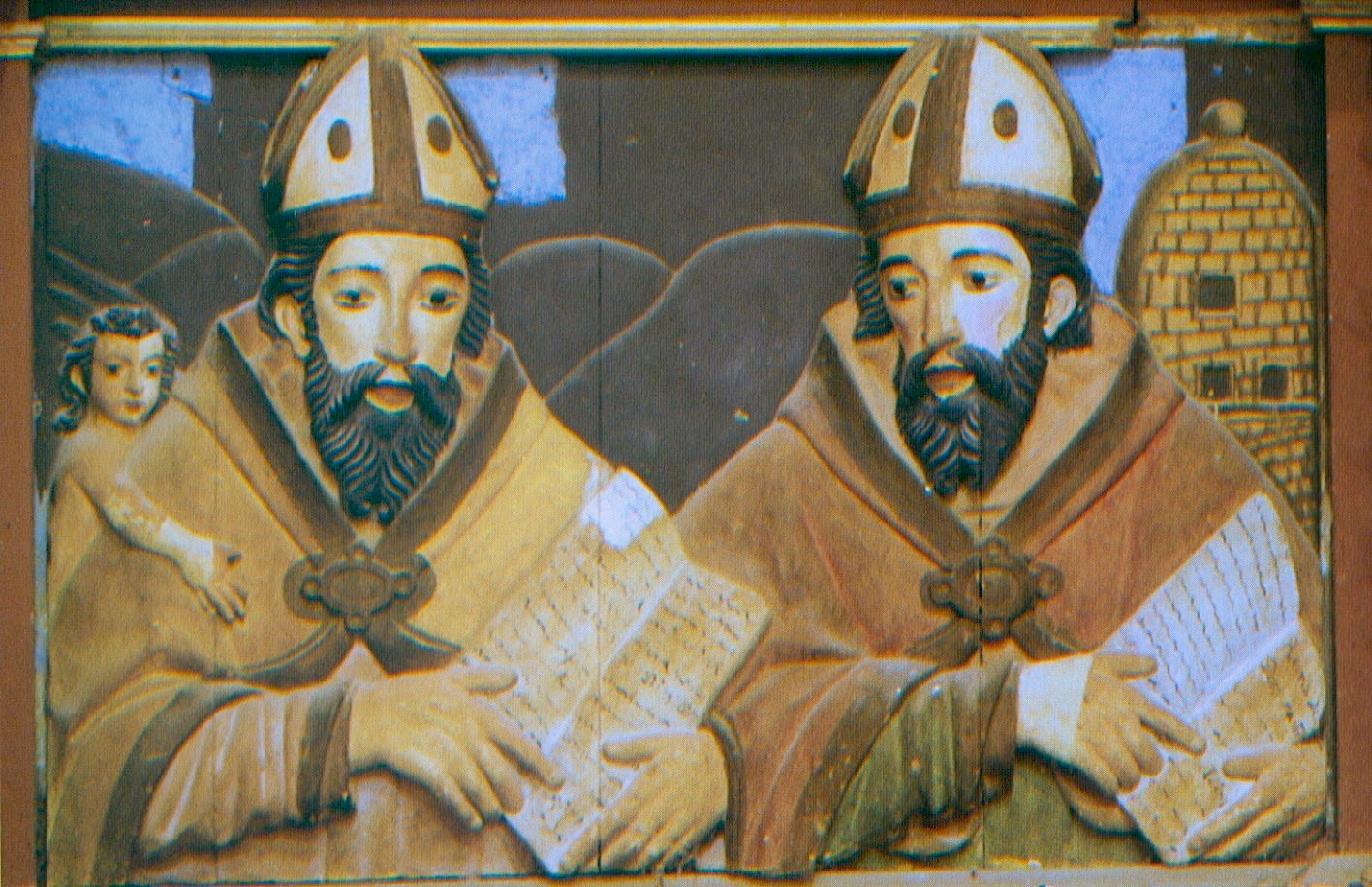 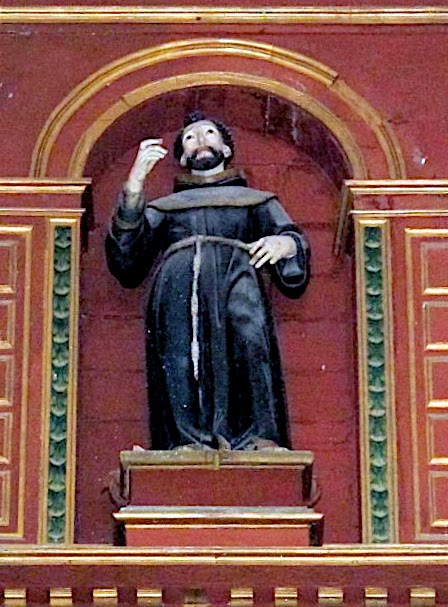 The cloister to the rear of the church has been lavishly refurbished to house a Museum of Sacred Art, with a focus on colonial Yucatán.

for complete details and suggested itineraries on the colonial monasteries and churches
of Yucatán, consult our classic guidebook.
Posted by Richard Perry at 12:41 PM