San Caralampio (St. Charalampos) was an early Christian saint and martyr from the third century AD.  A bishop in the central Greek city of Magnesia, like St Denis he was accused by the Roman governor of converting too many pagans, undermining his authority and fomenting a rebellion against Rome—this during a period of religious persecution under the expansionist Emperor Septimius Severus.
Although of advanced age—over 100 by some accounts— Caralampio was stripped of his vestments and brutally tortured. Proving indifferent to his torments, the saint was finally beheaded by order of the exasperated emperor.

Miracles attributed to him before and after his death, included exorcism and healing the sick, especially during the plague, that led to the conversion of many to Christianity including, according to legend, his torturers and even the daughter of the emperor himself!
Devotion to the saint became widespread in the eastern Mediterranean, especially in the Eastern Orthodox church.  His cult in the Americas seems to have arisen in central America, mostly in the 19th century, in Nicaragua, Guatemala and later Chiapas in southern Mexico.
Caralampio in Comitán
Comitán is a sizeable town in Chiapas, located on the Pan American Highway between the colonial capital San Cristóbal and the Guatemalan border. A way station on the old Spanish Camino Real, its principal monument is the grand church of Santo Domingo, which faces the large open plaza.
According to tradition, the first image of the saint arrived in Comitán in the 1850s, contained in a traveler's illustrated litany or novena. This document impressed  a local admirer in the barrio of La Pila, who erected a simple shrine and chapel dedicated to the saint there.
During a visitation of the plague in the area soon after, barrio residents invoked Caralampio as their protector, with the result that the village was spared its worst effects.
Devotion to the saint subsequently spread widely in the area, primarily in the barrios of communities near the Guatemalan border including, besides Comitán, Simojovel and Las Palmas. There is also an image of Caralampio in the San Cristóbal cathedral signifying his wider appeal.
The hillside shrine to Caralampio in Comitán is lavishly ornamented in neoclassical style inside and out.  The aged, white bearded saint appears in the center niche of the apse above the altar, kneeling and praying in his traditional pose, with Christ seated above him on a throne in the clouds.
Caralampio is occasionally accompanied by a Roman soldier wielding the executioners sword. Although there is a statue of such a figure in the chapel, it is not always placed in close proximity to the saint. 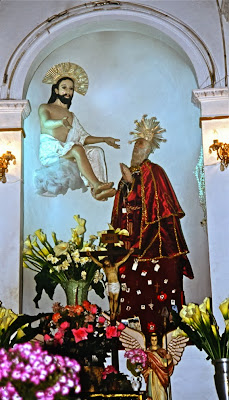 The festival of San Caralampio in Comitán is celebrated every year coming to a climax on February 11th with special masses and parades through the town that attract visitors and adherents from throughout the region. 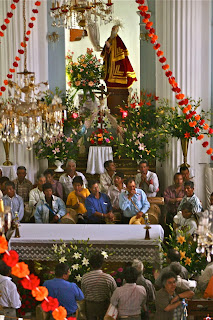 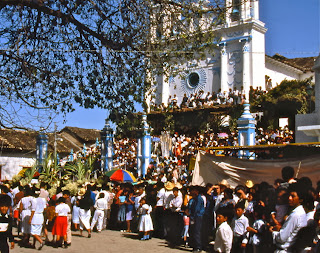 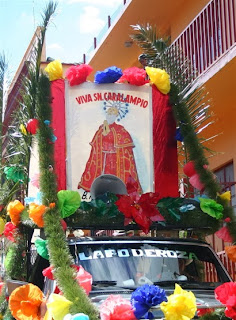 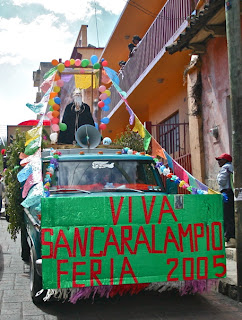 We accept no ads. If you enjoy our posts you may support our efforts
by acquiring our guidebooks on colonial Mexico, including More Maya Missions, our guide to Chiapas
Posted by Richard Perry at 5:28 PM