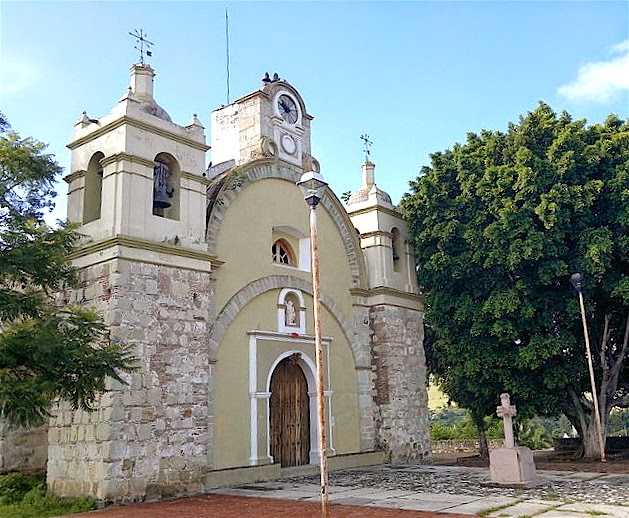 Finally, we look at San Andrés Zautla, in the lush Etla Valley, another of the off the track villages that we visited on the Historic Organ Tour. Despite its modest size, however, the church is home to a treasury of folk art and numerous colonial altarpieces. 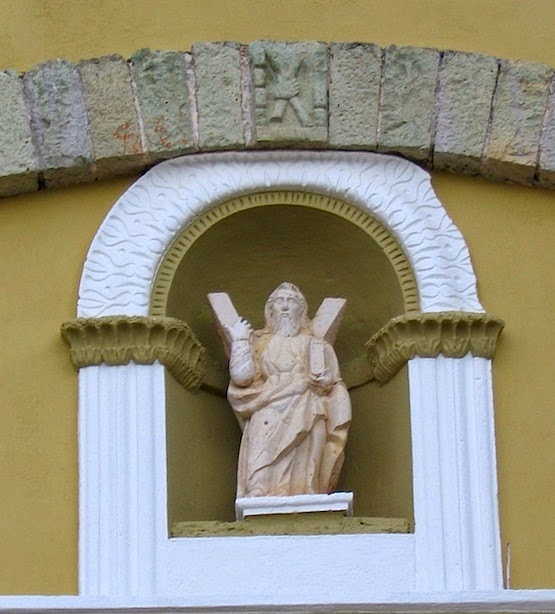 In the 16th century the simple wood and adobe church at Zautla was a visita of the mission at nearby Huitzo, but was almost entirely rebuilt in the 1700s.  The church front was again remodeled in recent times.
A modern statue of the patron St Andrew occupies the niche above the doorway although his symbol, an X shaped cross, is carved in the arch overhead and may belong to the earlier church. 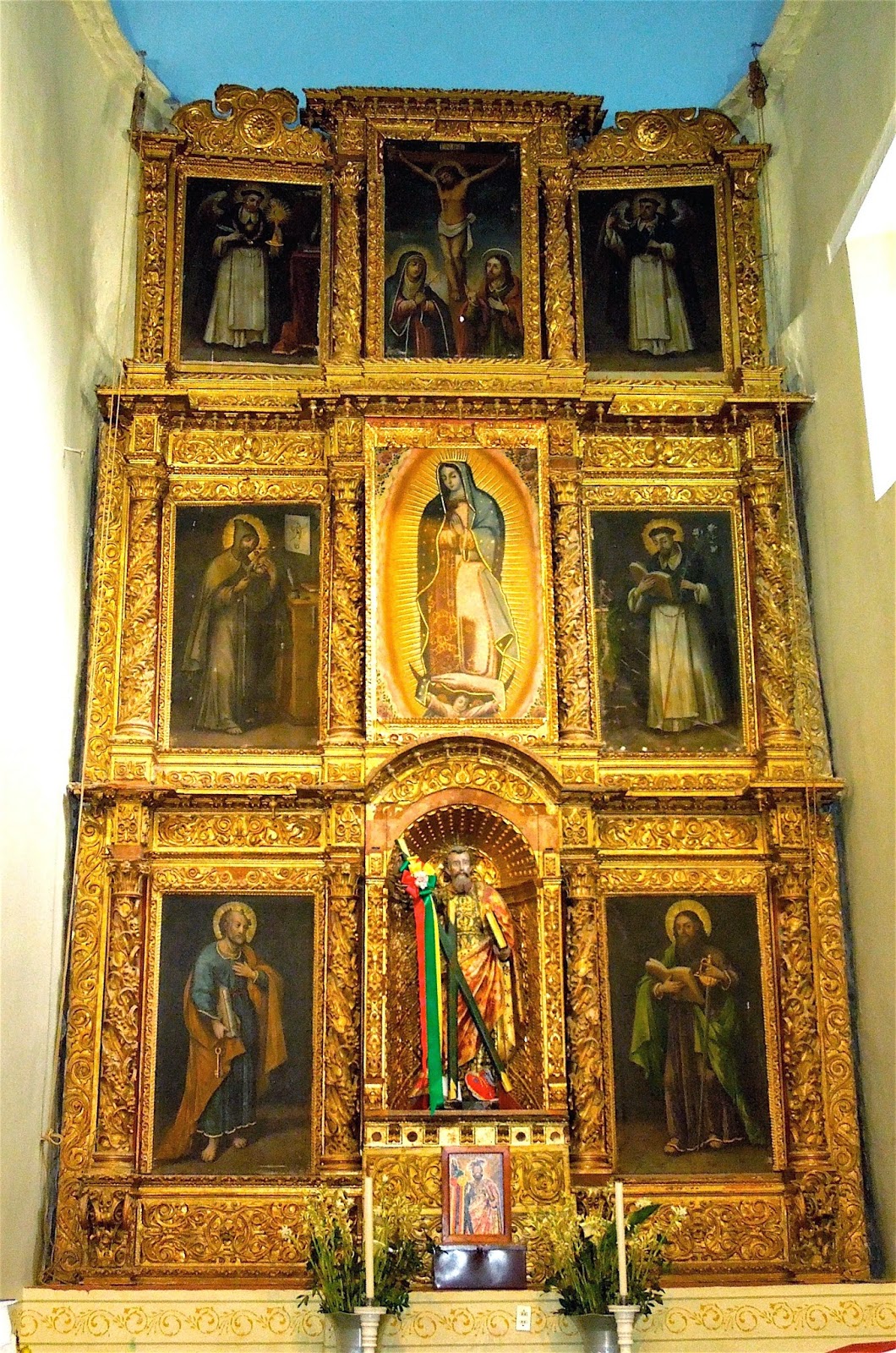 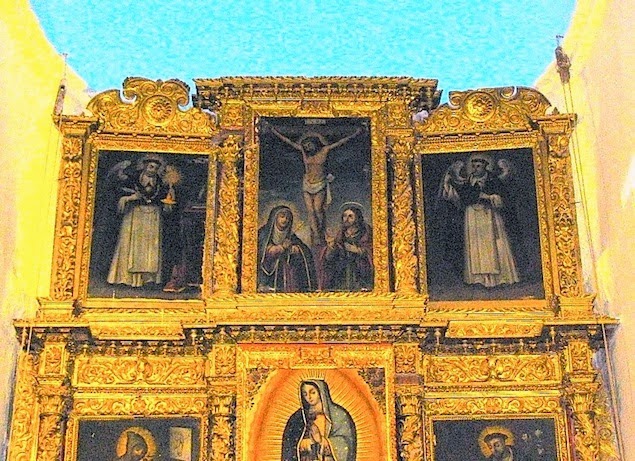 The imposing bearded statue at center is that of St Andrew, again holding his beribboned X shaped cross. Large chiaroscuro portraits of saints occupy the surrounding niches: Sts Peter and Paul on the lowest tier and above, various Dominicans, including St Dominic, and at the top two winged figures—probably St. Vincent Ferrer and Thomas Aquinas.
The gilded retablo of the Virgin of the Rosary, in the south transept, is similar in format, showcasing episodes from the life of the Virgin, except here in a charming, more popular style, that includes an especially affecting scene of her Nativity (of which more later). Zautla is also the proud possessor of what may be the finest table organ in Oaxaca. Recently restored to playing condition by IOHIO, this colonial jewel is beautifully designed and decorated in rococo style.  Fitted doors, exquisitely painted with portraits of saints and archangels including, once again, St Andrew, protect the colorful 18th century pipes and keyboard. A joy to see as well as hear. 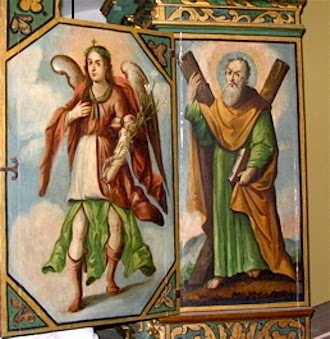 Numerous other examples of statuary, colonial and modern, are found in the church, including four old carved and painted figures of the Four Evangelists in niches around the dome, and another Christ Entering Jerusalem—a fixture of many Oaxacan churches (see Teotongo) 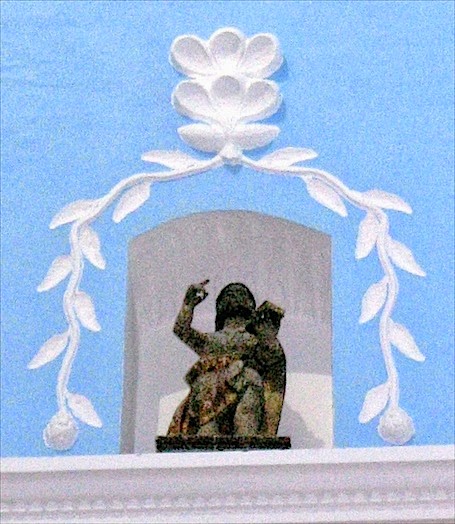 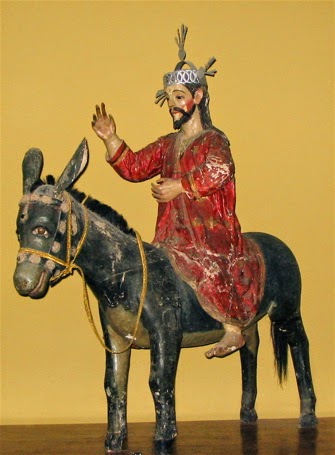 Posted by Richard Perry at 3:09 PM