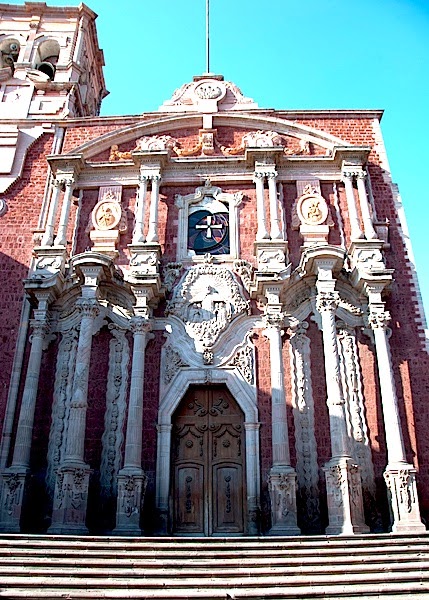 This distinctive church, built between 1786 and 1804, was the last major colonial religious building to be constructed in Querétaro. Originally belonging to the Oratorian Order, today it is officially the cathedral of the city of Querétaro.
Although reportedly built to a design by the seminal Mexico City architect, Francisco Guerrero y Torres, whose influential buildings include the famous Pocito Chapel and the church of La Enseñanza that we described earlier, the church bears little resemblance to either.
In fact the elevated  church front is a classic if somewhat extreme statement of neóstilo architecture. The varied columns and intervening vertical pilasters are set against a background of dark red volcanic tezontle, representing a sharp break from traditionally sober Queretaran architecture, although reminiscent of the architect's El Pocito chapel. 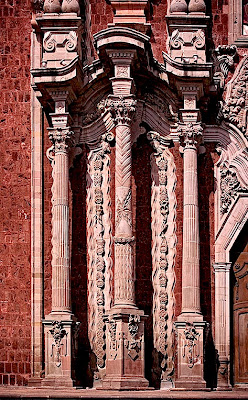 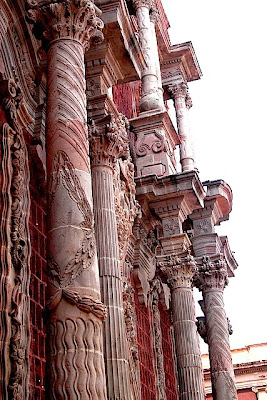 In baroque fashion the center facade opens to embrace the large central relief, which depicts St. Philip Neri as Protector of the Oratorian order, elaborately framed with clouds and cherubs.
Projecting on either side of the polygonal doorway, slender, freestanding columns of pinkish white marble are variously animated with  fluting, festoons, wavelike and spiral motifs. Behind them, wavy decorative pilasters, intricately carved with foliage and the Instruments of the Passion, reach up to layered looping cornices that spring from the frame of the Neri relief.
Above, paired Corinthian columns with bulbous bases support the overarching segmented pediment—the only hint of neoclassical influence.
While the Neri facade still revels in the sinuous movement and rich surface decoration of the late baroque; its prominent use of a dazzling variety of columnar patterns and its crowning classical pediment establish it as a signature example of neóstilo architectural design.
text © 2014 Richard D. Perry
images by the author and John Barreiro
Posted by Richard Perry at 1:37 PM