The Temple of Carmen, San Luis Potosí. The Architecture

Last year we posted a series on Neostyle architecture in Mexico, including one church in San Luis Potosí.
Another interesting potosino building in a similar vein is that of The Temple of Carmen. Together with the nearby Basilica of Guadalupe, El Carmen is a monument to Mexican eclecticism in late colonial architecture, but with an added fantastical flavor, whose salient aspects we explore in three posts: 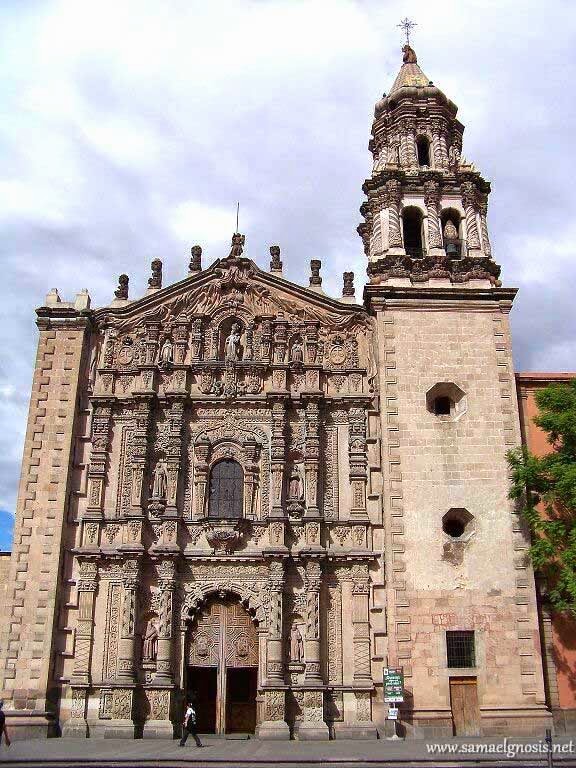 "One of the most daringly original facades of the eighteenth century..."

Joseph Baird,  The Churches of Mexico

El Carmen SLP
The Temple of Carmen, a major city landmark in San Luis Potosí, was founded, with its adjacent convent, in the 1740s. With funding from a wealthy Sevillian resident, construction proceeded rapidly during the 1750s under the direction of local alarifes or master masons Eligio de Santiago and José Lorenzo,
The west front was completed in the early 1760s and takes the form of a conventional retablo facade—an effect, however,  subverted by the ornamental and structural detailing.
The facade falls into two contrasting design phases: an unorthodox bottom tier and the more conventional upper levels: 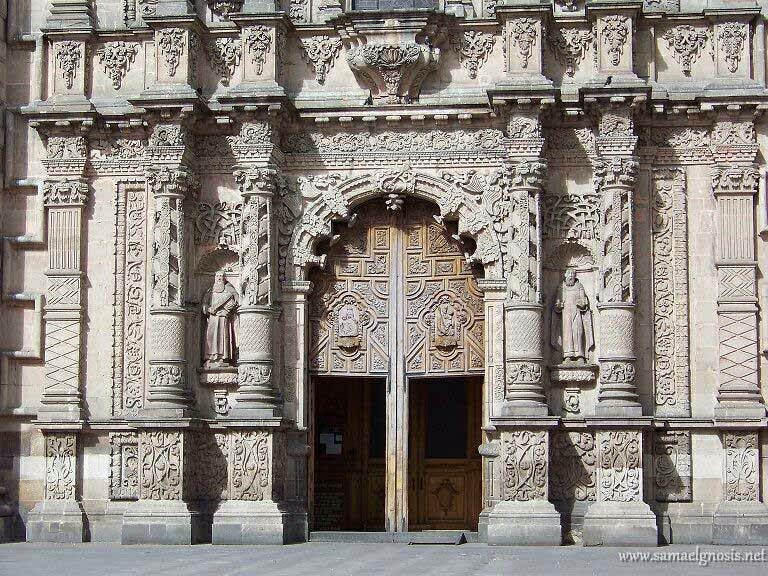 On the lower level, pairs of spiral "tritostyle" columns, faced with chain like carved panels of fruits and flowers, enclose narrow niches with bands of complex strapwork and foliated ornament. 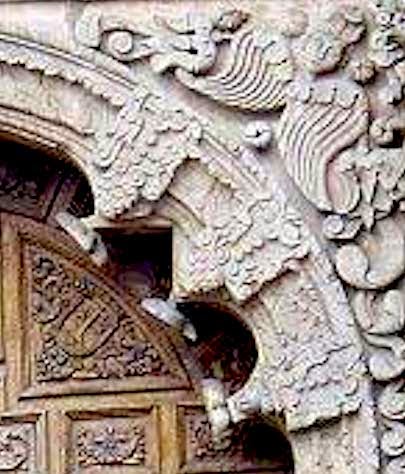 The neo-mudéjar west doorway acquires a scalloped, gothic appearance with the addition of pendants around the arch in the curious form of floral reliefs. 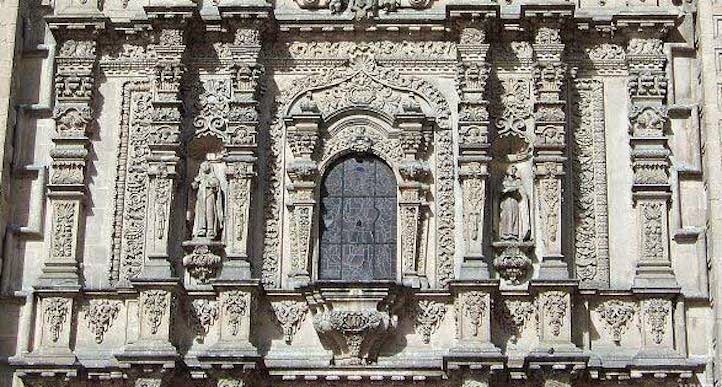 Although this pattern is repeated in the next level, the supports are more ordered, relatively conventional, estípite columns—the part of the design possibly attributable to the eminent visiting architect Miguel Espinosa de Los Monteros, who was also associated with the new Sagrario of the Metropolitan cathedral (Mexico City) as Master of Works. 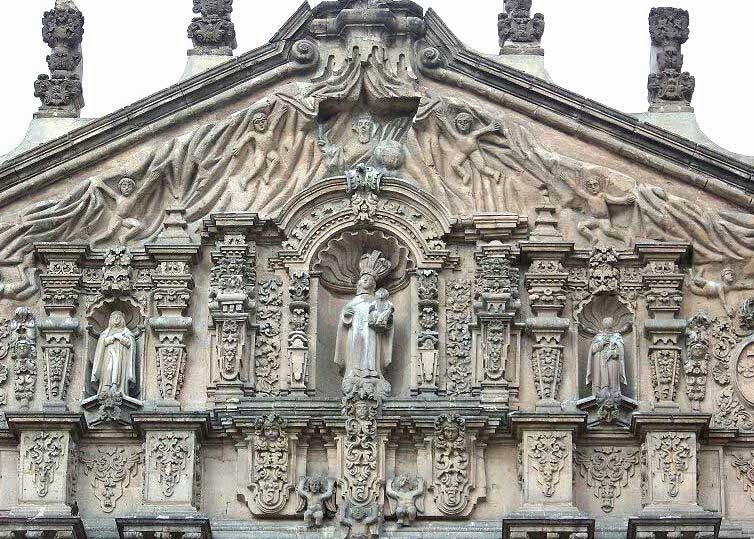 Be that as it may, estípite pilasters continue to be deployed in the top tier of the facade but on a reduced scale. These are capped by a draped stucco curtain or canopy upheld by cherubs that extends up to a scrolled surmounting pediment that uneasily combines baroque and neoclassical outlines.  Complex, outsized floral urns or pilasters protrude from the pediment.

Iconography
Aside from its architectural elements, the iconography of the church front reflects its Carmelite heritage, primarily through its juxtaposition of associated figures, obscure and familiar, from biblical sources as well as the history of the Order.
In the niches to either side of the west doorway appear statues of the biblical prophets Elijah and Elisha, both of whom, through their Old Testament connection to Mount Carmel, had special meaning for the Carmelites.

On the second level the well known Carmelite mystics St. Teresa of Avila and St. John of the Cross occupy the lateral niches. And on the top tier, Our Lady of Mt Carmel is flanked by statues of the early Carmelites, the martyr St. Angelo and the ecstatic, Magdalena de Pazzi. 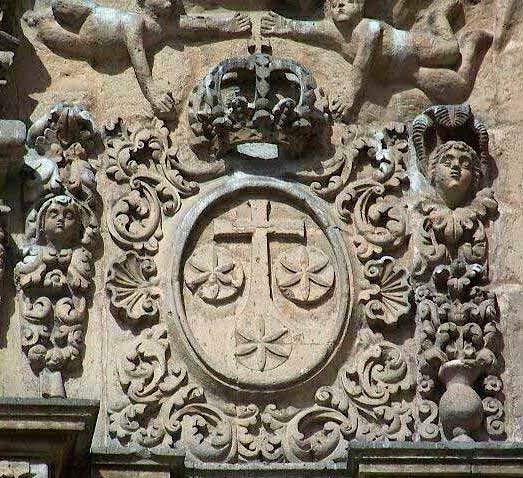 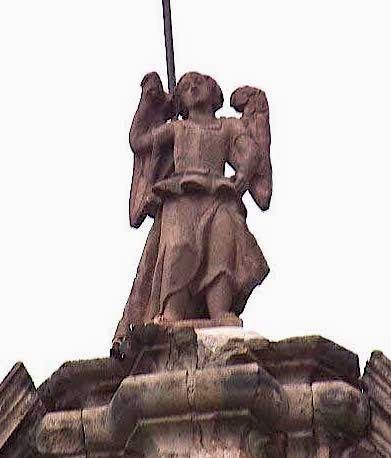 The Carmelite insignia of the cross of Mt Carmel and three stars are prominently emblazoned in oval medallions on either side. And the angel atop the crowning pediment, popularly thought to be the Archangel Michael, may instead be San Angelo. 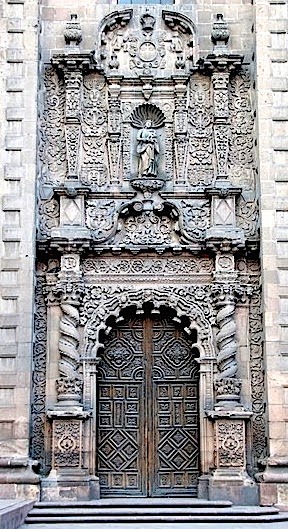 The Side Entry
If anything, the north doorway is even more fantastical than the facade and may well be solely the work of the local alarifes.
The scalloped moorish doorframe is here flanked by broadly spiraling columns set on high pedestals while overhead, estípite pilasters frame the wavy shell niche with its statue of St. Joseph.
The niche is surmounted by a classical entablature with an overarching broken pediment.  A bewildering variety of relief ornament crowds all the intervening spaces. 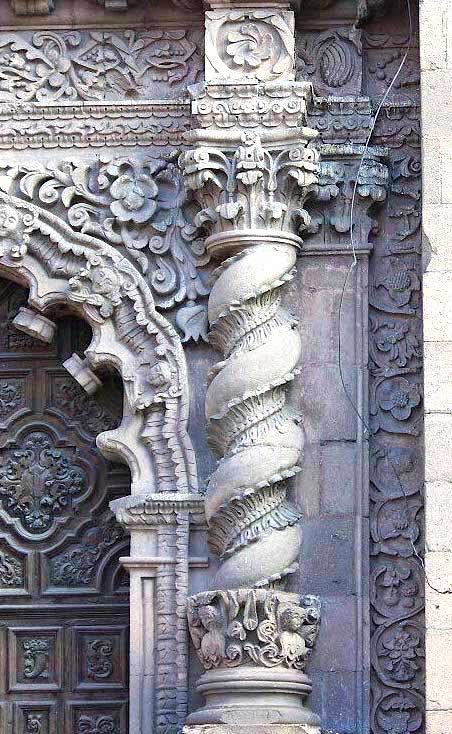 We accept no ads. If you enjoy our posts you may support our efforts
by ordering our guidebooks on colonial Mexico
Posted by Richard Perry at 2:06 PM