The Church Interior
The spacious interior at Coixtlahuaca exceeds even the grandeur of Yanhuitlan. Magnificent wheel vaults cover the choir and the main bays. Radiating ribs—molded, incised and painted with floral designs—create a colorful canopy high above the long nave. 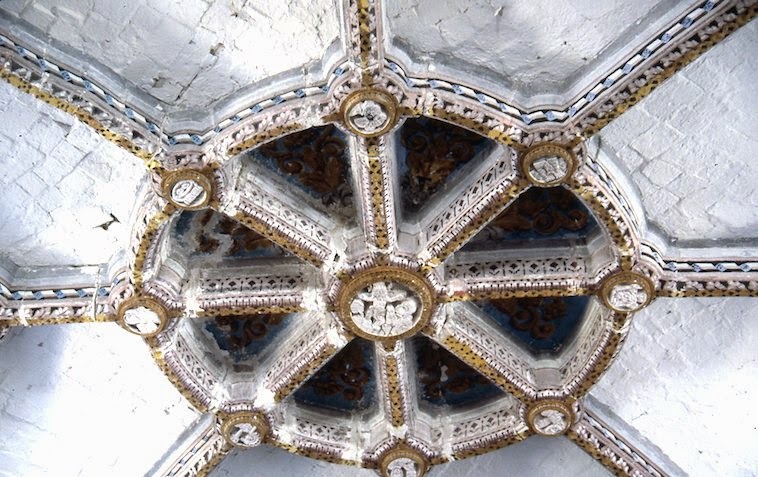 The roof bosses, intricately carved in tequitqui style, are perhaps the most detailed in any 16th century Mexican church. 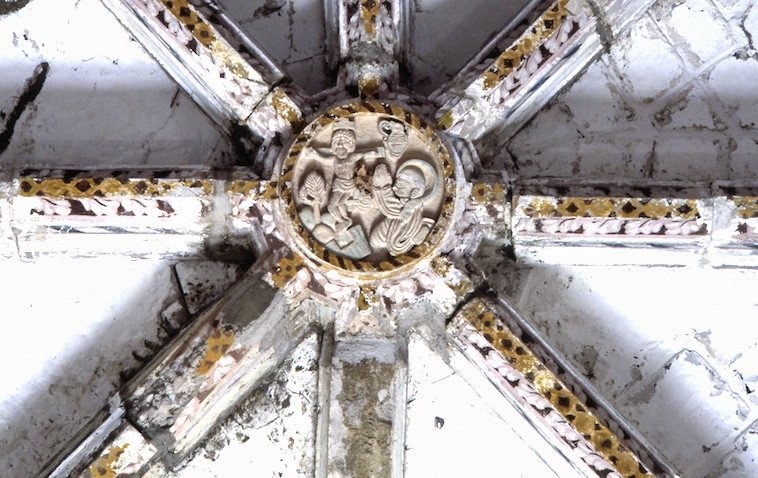 Diminutive Crucifixion scenes with St. Dominic and Mary Magdalene occupy the two westerly hubs, ringed by miniature inscribed portraits and the attributes of various saints—the disembodied head of St. John the Evangelist, his poisoned cup, and the eyes of St. Lucy appear in the outer medallions. 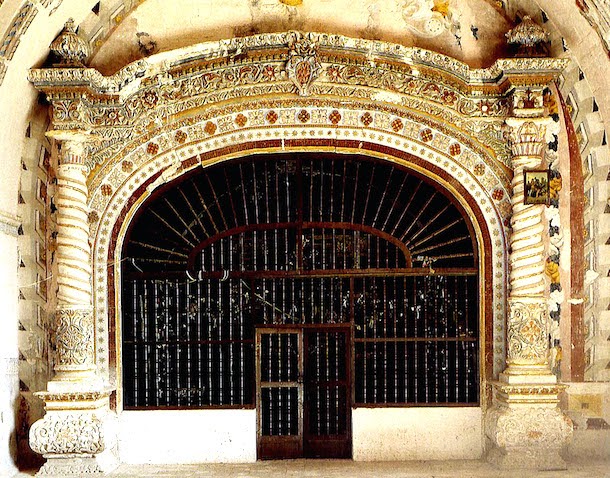 To one side of the vaulted under choir opens the festive entry to the chapel of the Virgin of Guadalupe, formerly the baptistry.
Flanked by a pair of spiral columns, its flattened arch is extravagantly carved with gaily painted stars and rosettes.

Painted stone fonts beside the entry and the boldly paneled red and gold wall pulpit, mounted high on a molded, corbeled base, add further color to the nave. An 18th century table organ rests in the choir loft.
At the east end, in contrast to the narrow, coffered sanctuary at Yanhuitlan, Coixtlahuaca boasts a broad apse, roofed by an expansive rib vault which provides a grand setting for the magnificent main altarpiece. 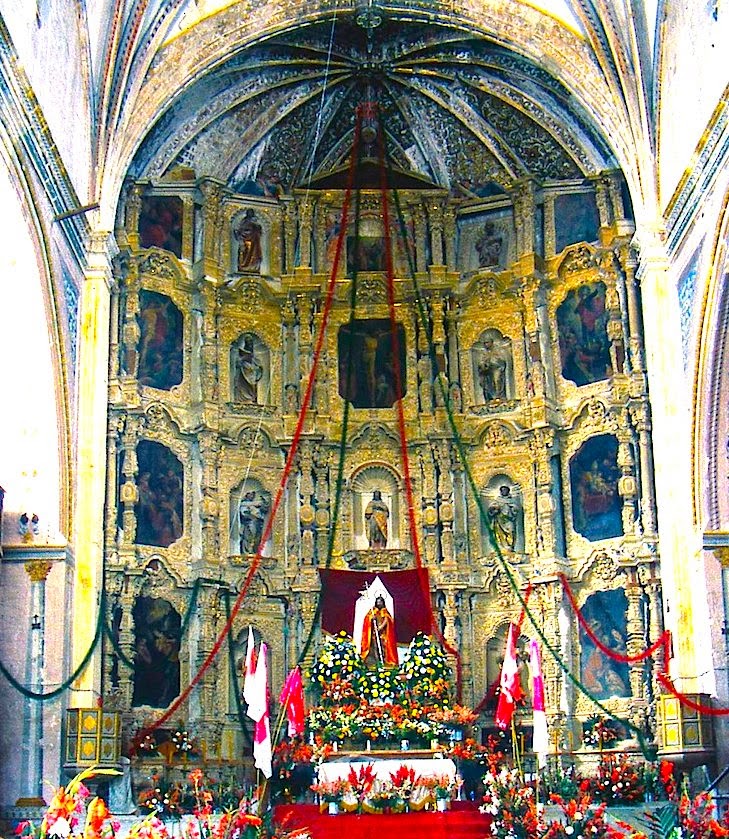 The Main Altarpiece
The dazzling retablo mayor is the artistic and spiritual focus of the church. Its ornate white-and-gold baroque framework rises through five tiers, each encrusted with luxuriantly carved foliage and scrolled cornices.
The altarpiece is divided into five vertical calles by complex estípite columns, although a few Renaissance columns survive from an older, 16th century frame, identified by their swagged, fluted shafts.
As at Yanhuitlan, the altarpiece is a showcase for paintings and sculptures from the earlier retablo.
Of the fourteen painted panels, eleven are attributed to the 16th century Sevillian master, Andrés de Concha. These major works, considered to be among the finest cycles of Mannerist paintings in the New World, were recently removed and restored by INAH. 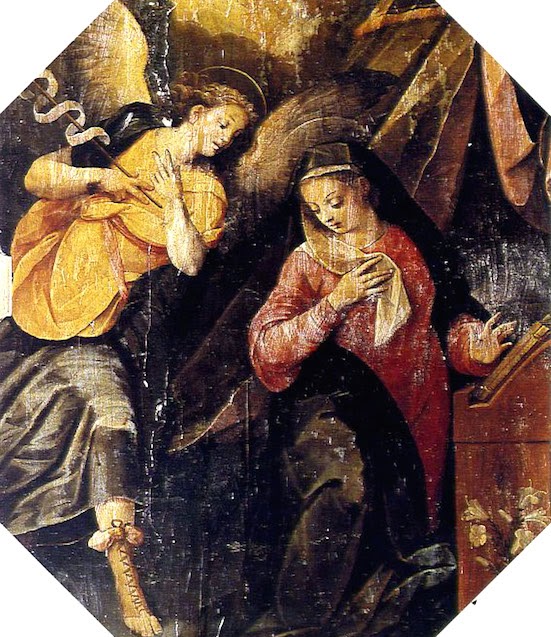 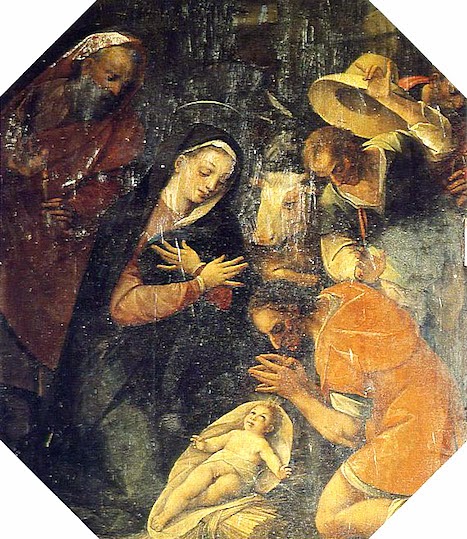 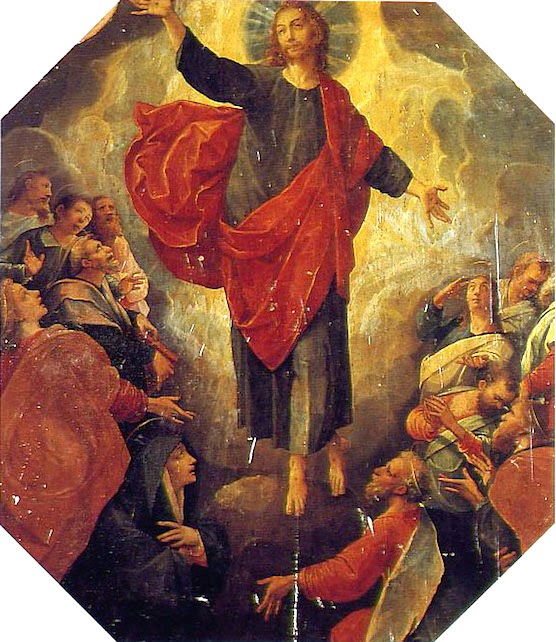 In contrast to the tender Nativity scenes below, in the upper tier Christ ascends before the amazed gaze of the Virgin and Apostles—a slashing angular composition dramatized by Christ's red robe rising against a glowing background. 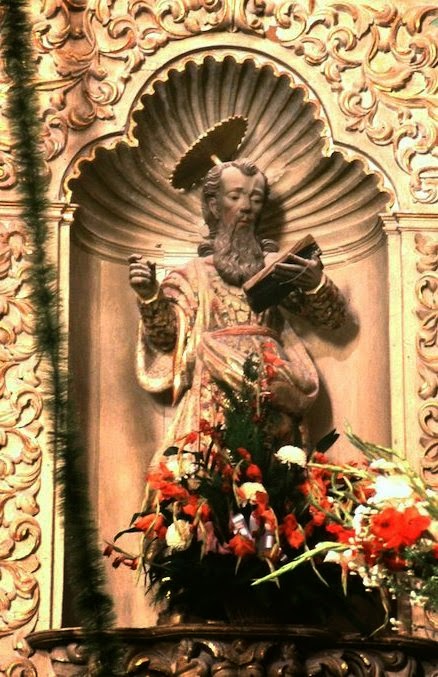 St Peter and John the Baptist
Simon Pereyns, the Flemish sculptor who created the famous altarpiece at Huejotzingo (Puebla) and collaborated with De Concha at Yanhuitlan and elsewhere, may have carved several of the figure sculptures at Coixtlahuaca. Various saints, apostles and Doctors of the Church are portrayed in heroic poses with luxurious draperies and eloquent expressions.
Restoration of this magnificent altarpiece is almost complete, assuring its rightful place of honor among Mexico's finest artistic treasures. 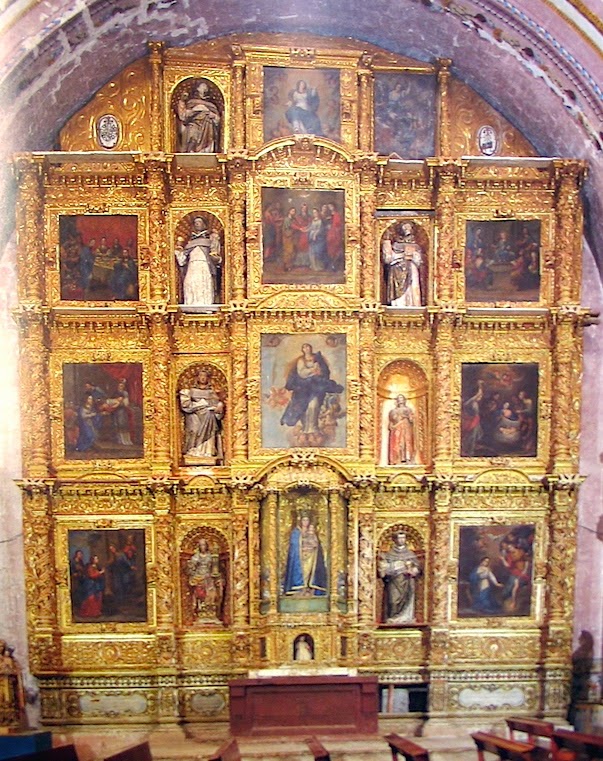 Several other retablos of considerable artistic and historical interest occupy side niches along the nave. One large and particularly handsome example is designed in classic Oaxacan baroque style, bordered by a gilded frame of intricate spiral columns and cornices hung with spindles.
The central painting of the Virgin of the Rosary, clad in billowing robes, is surrounded by statues of saints in shell niches and brightly hued paintings depicting the life of Christ in the outer compartments.