Before we proceed with our series of posts on Coixtlahuaca, we would like to slip in this description of San Bernardo, one of a group of distinctive colonial monuments in the Mexico City region.

The baroque church of San Bernardo in the historic center of Mexico City (Venustiano Carranza / Avenida 20 de Noviembre) is a colonial survivor—an unusual building with an interesting history and stylistic variety.
Founded in the early 1600s by Franciscan Conceptionist nuns from Regina Coeli following an internal conflict, construction of this offshoot had a rocky start, but with the help of wealthy patrons was completed and dedicated to St. Bernard in 1690.
Attributed to the noted Mexico City architect Juan de Zepeda, the building hewed to the classic plan for a nun’s church with two almost identical lateral entries.

Stylistically, while both these facades follow the sober, classical framework of the early baroque, there is a profusion of ornament—a phase dubbed "refined lavishness" by the critic Manuel Toussaint.
These elements include the ornate, almost heraldic center niches, and a variety of decorative columns: spiral, wavy, zig-zag, tritostyle, that anticipate the Neostyle church fronts of a century later. 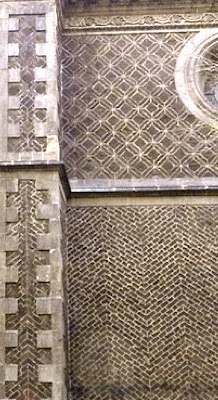 Another unusual aspect of the church is its use of dark red tezontle basalt and Pueblan style herringbone patterning between passages of stonework and on the intervening wall spaces—a revival of 16th century patterns of construction in the city.
However, the building we see today is not as originally constructed. In 1861, following the Reform, the adjacent nuns' convent was demolished to allow passage of a new street.
Later, in the 1930s, city planners decided to demolish the by then abandoned church to put through the new street of Avenida 20 de Noviembre.
After much debate* it was decided that the western section of the church be removed and the displaced western lateral entry reconstructed stone by stone to serve as a new facade for the now foreshortened church.
Thus the new west front is identical to the remaining side entry, the only distinction being the statues of gilded alabaster—portraying the Virgin of Guadalupe on the front and that of St. Bernard on the side.
Despite its mutilation, the church of San Bernardo remains as one of the most elegant and intriguing 17th century monuments in the city.

* Why such costly mitigation was even undertaken during a period of notorious disregard for colonial religious monuments is not explained.
One contributing factor may have been the famous Letras de San Bernardo, a poetic cycle penned by the iconic nun and poet Sor Juana Inés de la Cruz to inaugurate the founding of the church and convento, in which she praises its architecture and the architect:

Posted by Richard Perry at 1:29 PM