Zempoala. Part One: the Monastery

We continue with our series of revisiting notable early colonial missions, as described in our classic Mexico's Fortress Monasteries, with a new look at several of these monuments located in the state of Hidalgo north of Mexico City, starting with Zempoala.

Zempoala
Imposed against a stark landscape of dry plains and volcanic hills, the Franciscan monastery of Todos Santos Zempoala is a late 16th century gem. Beyond the austere architecture of the church front lies a treasure trove of colorful early murals. 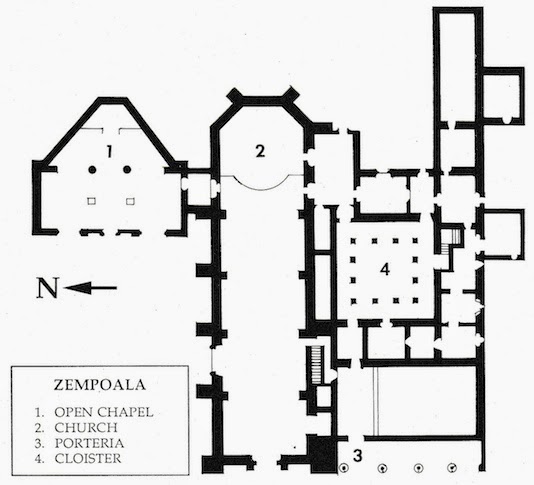 Zempoala started life as a modest visita of the great Franciscan monastery of Tepeapulco, but with the completion, about 1570, of Father Tembleque’s celebrated aqueduct, a vast labor force of 5000 natives was put to work building the new monastery of Todos Santos.

The spacious atrium, framed by a triple gateway, allows ample room to take in the church, convento and arcaded former open chapel. 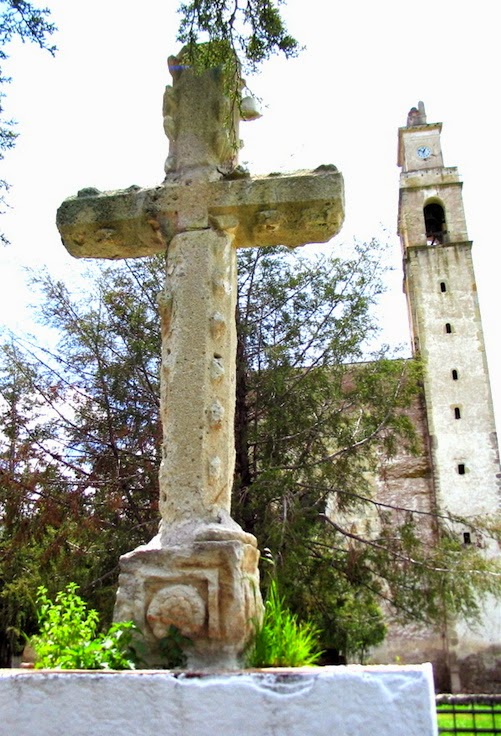 En route from the arcaded gateway to the church stands a distinctive atrium cross, although now much eroded.
Mounted on a carved pedestal and stepped base it takes the unusual form of an octagonal tree cross, bristling with "pruned" stumps on its angled facets. 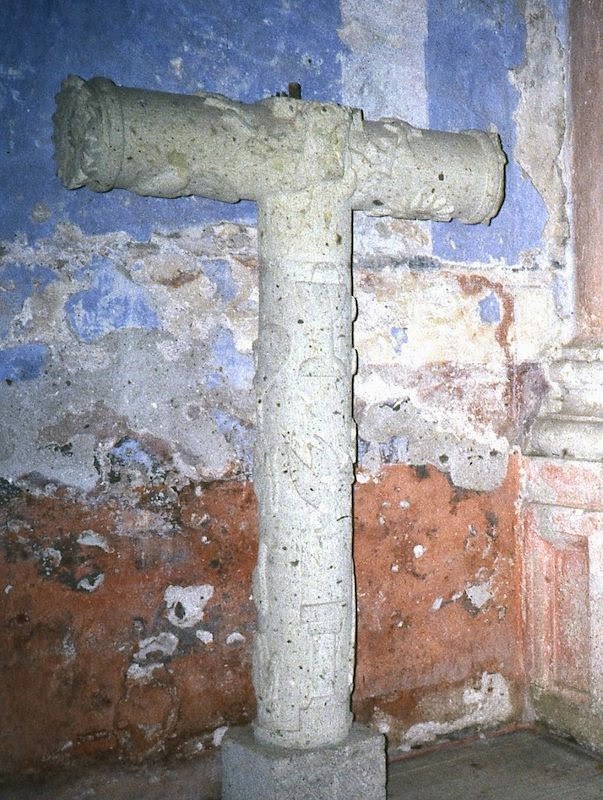 A second cross, now headless, rests in the church. Possibly the original atrium cross, it is cylindrical in form and densely carved with Passion symbols. 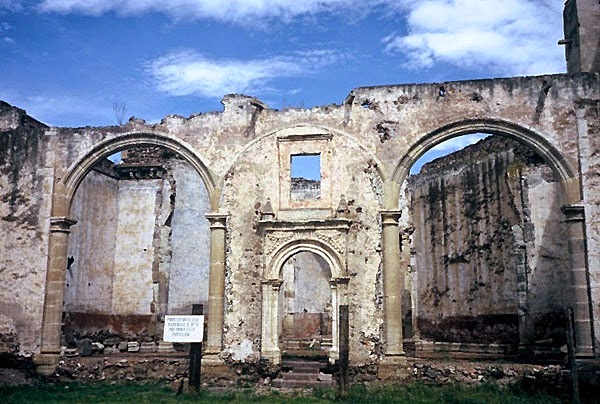 On the north side of the church stands the roofless open chapel, an elegant, arcaded structure that predates the rest of the monastery. 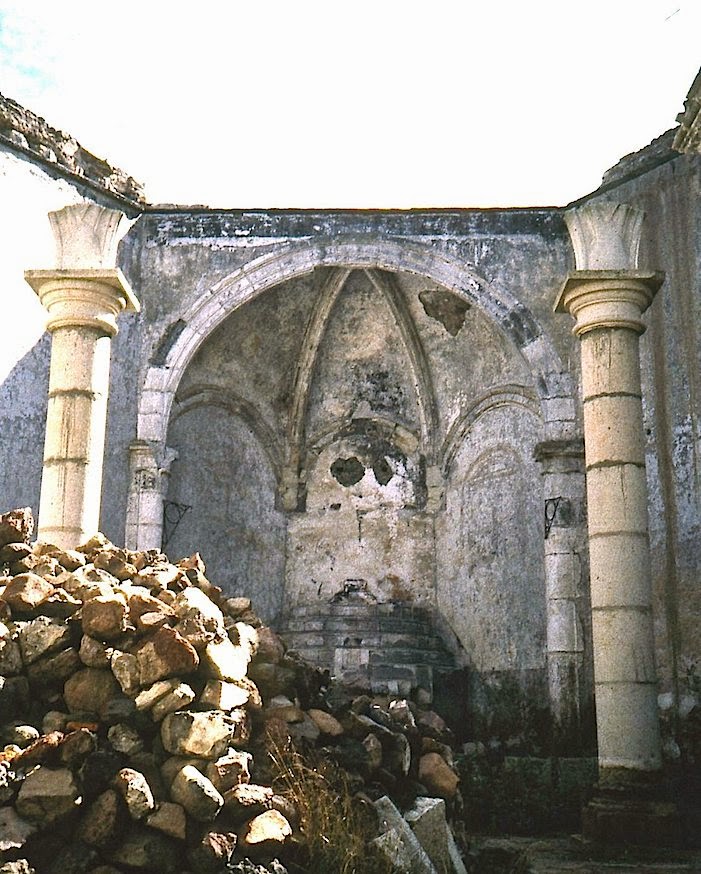 From the hexagonal apse, rib vaulted and faced with blind arcades, the side walls flare out to meet a wide transverse nave heralded by tall arcades set on slender Tuscan Doric columns—recalling the earlier open chapel at Franciscan Cuernavaca. 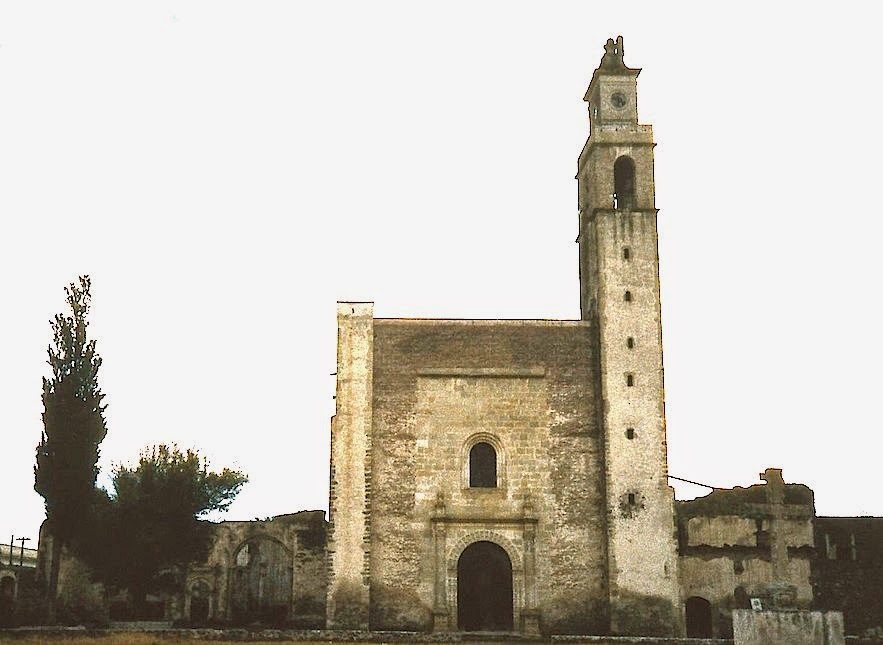 A single, lofty tower of Florentine appearance is the distinguishing feature of the otherwise austere church front.
Set in a cliff like wall of plain stonework, the west porch follows the severely classical purista style of the late 1500s with fluted half columns and a coffered doorway. The rounded choir window overhead has a Romanesque simplicity. 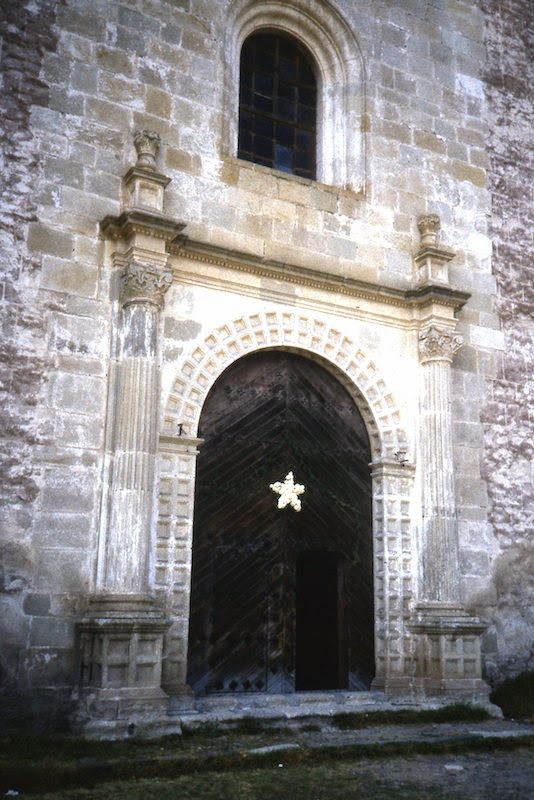 In part two we describe the interior murals.

Posted by Richard Perry at 3:00 PM