Epazoyucan. Part One: the Monastery Church

As early as 1528 Franciscans from Zempoala evangelized the Otomí people of the area, building a primitive mission on a hill called Tlaloc, whose ancient temple was sacred to the Mexican deity of rain and lightning.
Although the Franciscans went on to found a new monastery here in 1540—dedicated to St. Andrew, by tradition the apostle to distant pagan peoples—it is to the Augustinians that we owe the present magnificent building.
Reportedly built in a brief “seven months and seven days,” it was the first Augustinian mission to be finished in this region. 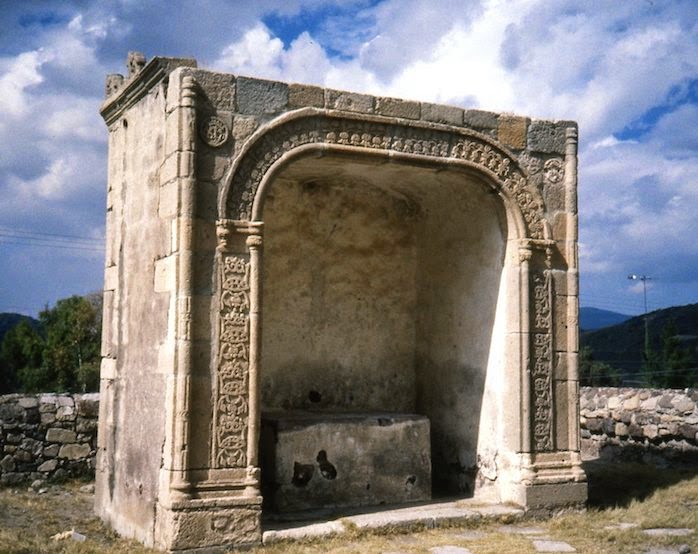 The monastery is silhouetted against volcanic hills dotted with cactus and maguey. Its sloping atrium containing scattered tombstones, a handsome carved cross and three of the original posa chapels.

Instead of being being built into the corners of the atrium walls as was customary, these chapels are isolated, box like shrines with carved archways and decorative parapets.
The Atrium Cross
Mounted atop a large squared base, the plain octagonal cross displays the simplest of designs. The sole relief is a magnificent, medallion like Crown of Thorns motif that covers and extends beyond the crossing.
With a woven, wreath like fringe and a hole pierced in the center surrounded by a carved floral design, this armorial looking pattern may be intended to represent, the two headed eagle emblem of the Hapsburg empire, of which colonial Mexico was a province. 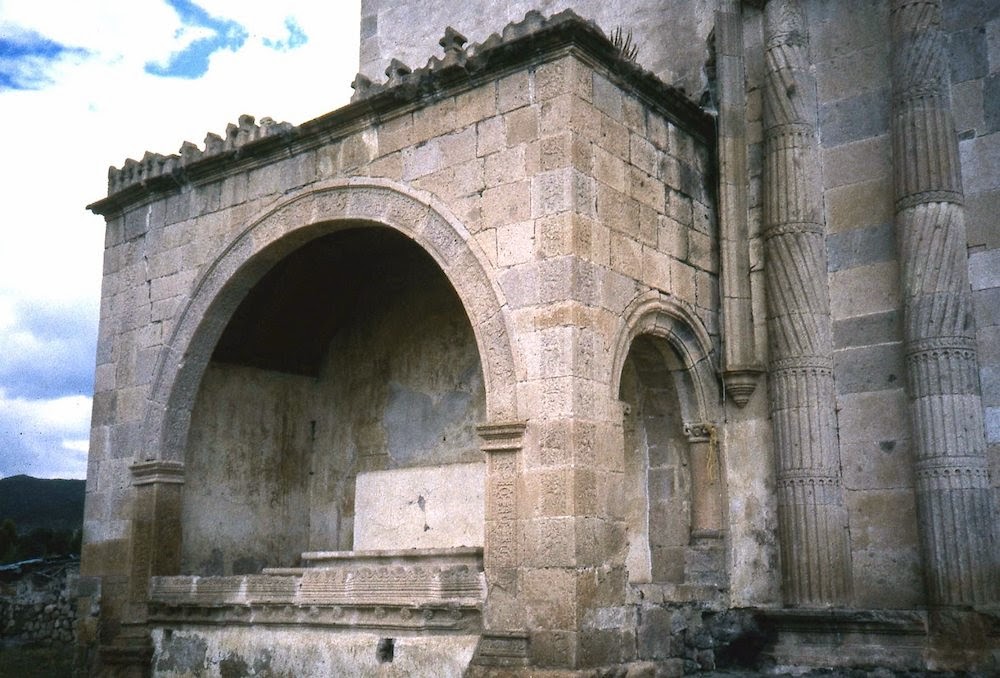 The Open Chapel
Carved fleurs-de-lis parapets surmount the chapel, which projects  from the church front beside the west entry below the single north tower.  Standing atop a broad flight of stone steps, the chapel resembles a larger posa with intricate filigree carving on the arch, jambs and quoining.

Behind the elevated altar, a now mostly effaced Crucifixion mural features on one side the figure of the Augustinian saint Nicholas of Tolentino in his star spangled robe, drawn in the style of the convento frescoes (see Part Two).
Despite its unusual position in front of the church, this modest chapel may be the oldest part of the monastery, as described by the Augustinian chronicler Fray Juan de Grijalva.
The Church
Although Epazoyucan has elements of a fortress church, with great stepped buttresses and a squared front, the facade shows considerable refinement,
Its unorthodox, geometrical framework of refined alfiz moldings and cornices serves to unite the rounded doorway and sharply pedimented choir window, all against a background of handsome ashlar stonework.
Half columns of alternating vertical and spiral fluting with miniature horseshoe shaped tips constitute the most decorative element of the facade.  Greek and Latin monograms of Christ are incised in the upper facade—a decorative motif repeated inside the church.
Today the vast, grey interior is almost painfully bare apart from the monograms on the walls. A wooden floor overlays the recesses of the prehispanic foundation below.
The long, lofty nave was originally roofed by an exceptionally wide, wood beamed ceiling, which was replaced circa 1700 by a stone vault, now cracked. 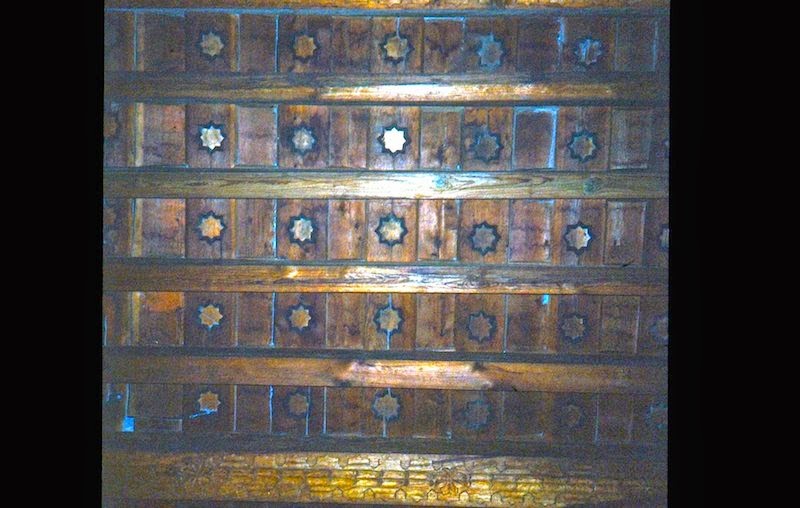 One surviving section of this artesonado ceiling under the choir, however, gives us an idea of its original majesty; supported by stout hand hewn beams, the decking is inlaid by eight pointed moorish stars in contrasting woods. 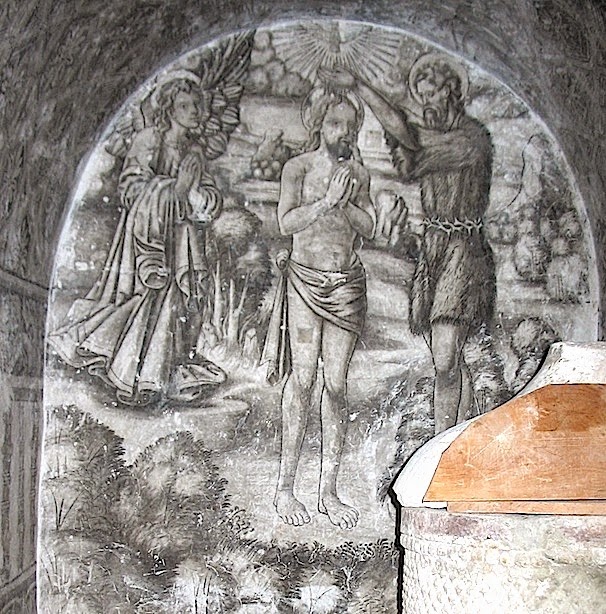 The baptistery beneath the choir contains the only remaining mural inside the church: a 16th century Baptism of Christ, recently restored to reveal an angel on the upper left.

Posted by Richard Perry at 1:55 PM