We conclude our posts on Epazoyucan with a review of the Sala de Profundis frescoes.
The Sala de Profundis
A passageway beside the cloister stairwell leads into this dimly lit former friars’ chapel where frescoes cover all four walls to the ceiling.
Once again the murals illustrate eleven scenes related to the Passion of Christ, framed by painted Plateresque niches and lettered borders. As with the open chapel fresco, the artist has used the triptych form, in which the central subject is flanked by supporting figures, to unify and dramatize the subject matter.  And in panel after panel the measured structure and sensuous lines of the composition complement the themes.
Here the later coloring of some of the murals has been removed to expose the monochromatic, grisaille style of the underlying graphics, drawn from northern European print sources.
Although in poor condition, some of the murals have been stabilized and partly restored. More complete and appropriate conservation remains to be done.

Below we show some of the better preserved frescoes: 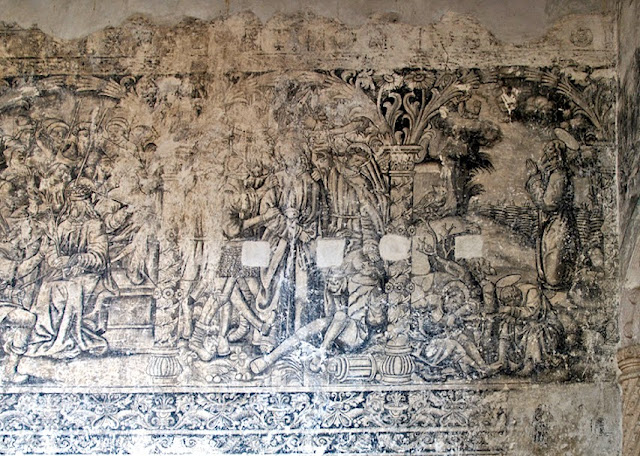 Early episodes in the Passion story unfold in a linked movement along the west wall, starting with the Agony in the Garden, continuing with the Taking, the Mocking and the Flagellation of Jesus.

The sequence continues on the south wall where the Crucifixion is the main focus, flanked by another expressive Descent or Pietá, and the Ascension.
Below the Crucifixion extends an elongated Last Supper
Other, more fragmentary murals in the Sala include scenes of Pentecost, the Harrowing of Hell and a moving Noli Me Tangere with Mary Magdalene along the east wall, watched over by a portrait of St Augustine. (pictures to follow)

The powerful classical influence on the unknown muralist is seen most clearly in the Resurrection on the north wall, in which the triumphant figure of the risen Christ soars above an Umbrian landscape. (pictures to follow)

The Refectory Murals
The darkened former refectory on the south side of the cloister contains fragmentary, full length portraits of Augustinian saints and martyrs, and in another triptych on the far wall saints Augustine and Nicholas of Tolentino stand on either side of another Crucifixion scene. (pictures to follow)

text © 2015  Richard D. Perry.   images by the author and courtesy of Niccolò Brooker
Posted by Richard Perry at 12:32 PM