In an early series of posts on this blog—in July 2012—we looked at a cluster of country churches in southern Morelos and western Puebla with vividly painted and sculpted popular baroque facades.
Most churches in this group trace their style and decor to the seminal church front of nearby Tepalcingo, which because of its complexity we can describe only briefly in this post. 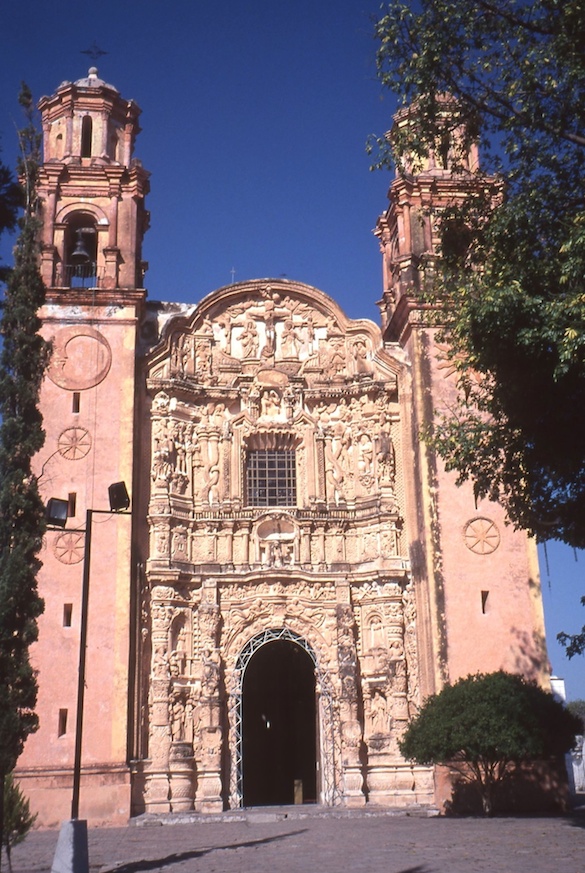 Tepalcingo
El Santuario was built between 1759 and 1782 to house the miraculous image of Jesus the Nazarene, or El Señor de Las Tres Caidas, whose popular cult was then, as now, attracting increasingly large numbers of pilgrims from across the region.
The extraordinary, sculpted retablo style facade is a masterpiece related to the popular barroco poblano style, probably executed by masons and stucco craftsmen from Puebla, although it is quite unlike any church in that city.
Fashioned from warm sandstone, from time to time in the past the facade has been painted in contrasting hues, although currently much of the color has faded. 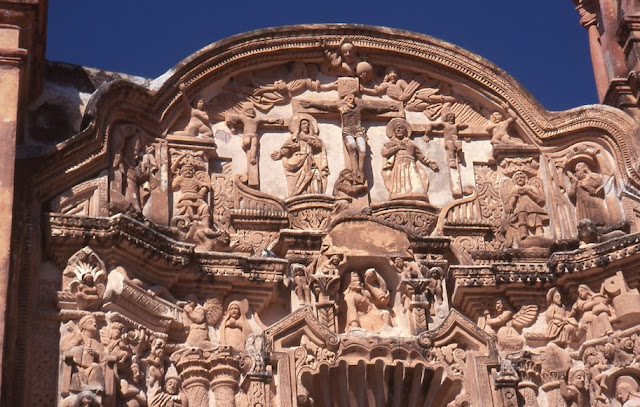 Described variously as a "sermon in stone"* or a "deeply moving folk drama,"* the facade recounts the Christian story—the fall and redemption of man through the Life and Passion of Christ—via a highly intricate iconography * that features a myriad of biblical figures and events, culminating in the Calvary spread across the gable.
These are related in a series of expressive tableaux and relief figures skilfully modeled in a popular tradition reminiscent of religious sculpture dating back to medieval times. 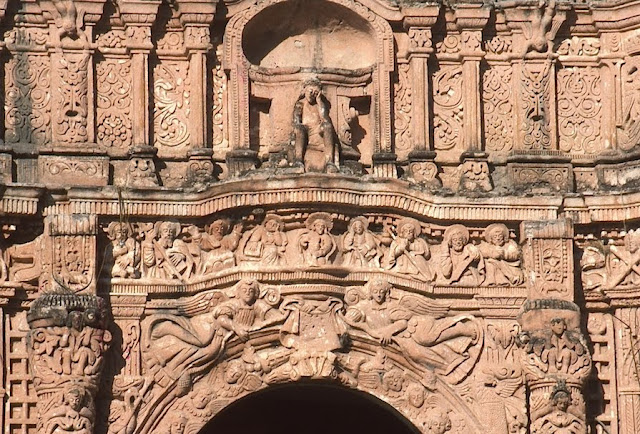 In addition to the Crucifixion scene, other focal tableaux include the sorrowful figure of Jesus the Nazarene below the choir window, and Jesus with the Apostles lined up with their attributes above the doorway. (Formerly erroneously thought to represent the Last Supper) 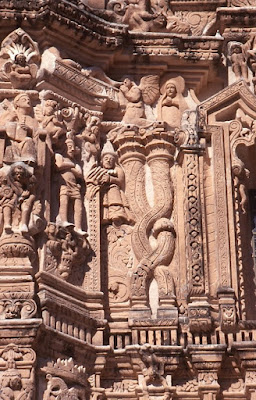 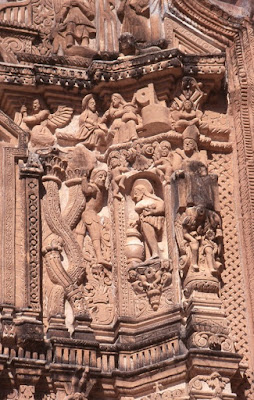 Although sui generis in the annals of Mexican popular art, these tableaux and statuary are framed in an eclectic mode of the late baroque by a variety of entwined pilasters, ornamental niches, friezes and archways, all enhanced by a tapestry of densely carved angels, heraldic insignia, swags, spirals and scrolls. 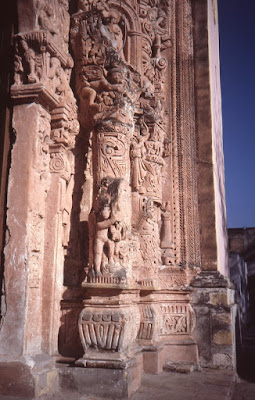 Imperial two-headed eagle                  west doorway & columns
* This unique colonial monument and its iconography have been studied by eminent art historians including Manuel Toussaint, Constantino Reyes-Valerio and Robert Mullen.
* Joseph Armstrong Baird
* "... Architecturally, the cruciform church is not unusual. Sculpturally, its facade has no equal. Its purpose was meant to be didactic, since many episodes from the life and death of Christ are depicted. The tall rectangular facade is set so deeply between tower bases that it allows for a folding screen composition comprising three horizontal tiers and five vertical divisions.
Amidst a welter of images the drama unfolds section by section.  Immediately capturing one's attention is the high relief statue of Saint Peter in the section to the left of the door . Angels hold back heavy curtains allowing mortals to view him holding the keys to the Kingdom of Heaven. In the niche above is a scene from the Agony in the Garden, an angel succoring Christ. The sleeping apostles are found on the outer panel on the far left.
Adam lies asleep in the capital of the doorjamb; opposite, on the right jamb, Eve gazes at the forbidden fruit. Mirroring Saint Peter, Saint Paul stands under the blindfolded Christ. The large figures on the four columns are the four evangelists with their respective symbols.
Figures and flora emerge from bulbous columns. At the base of the farthest right column is a heart sprouting flowers; its mirror image to the left of the door is pierced with swords… Above the arched door frame and filling the spandrels, angels hold a cloth which forms the keystone. A frieze stretching across three divisions of the facade is devoted to the Last Supper (?). In the center, Christ holds bread and a chalice. To either side are four apostles; the other eight are located in the adjoining panels.
Above, the mocked Christ is seated in the niche, a wreath of thorns on his head, a cloak thrown over his shoulders. On both sides of the niche a flat floral pattern, fronted with squat square columns, stretches across the facade. An occasional angel floats downward. In the middle tier other scenes from Christ's passion are depicted. Here undulating columns are intertwined, more organic than structural. Their pattern of sinuous lines and drilled holes makes them almost serpentine.
The scene in the crest completes the iconography. In the center is Christ crucified, with Mary Magdalen at his feet; Mary, his mother, to his right; John to his left; and, to each side of Christ, the crucified thieves. At top center, God the Father blesses the Son with his right hand; the left holds a globe, symbolizing the universe.
While Adam and Eve are depicted still in their state of innocence, their fall into sin is clearly implied, since the overriding theme of the figured facade is mankind's redemption from eternal death. If thoughts and intentions behind this work were European, the execution was not. The native artist simply called on his experience and told the story, putting it together as a great piece of popular art. This facade, while echoing the didactic facades of Romanesque Europe, cannot be imagined in eighteenth-century Europe. "  (description adapted from Robert Mullen, 1997)

text © 2016 Richard D. Perry
images by the author and Niccolò Brooker
Posted by Richard Perry at 11:50 AM