For our next Yucatán post we remain in Mérida to take a closer look at its celebrated colonial mansion of La Casa de Montejo. 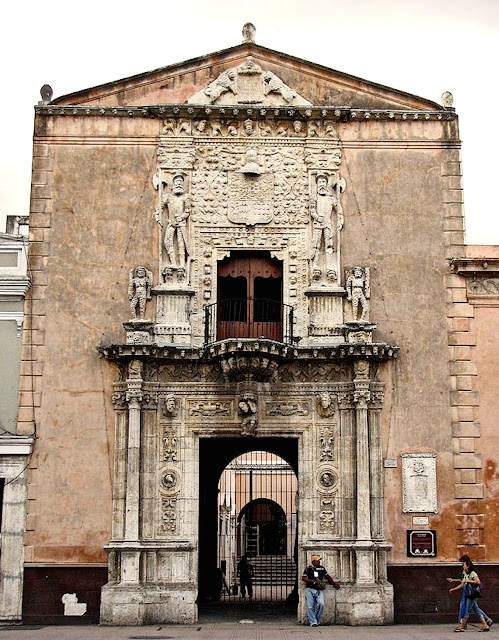 This intriguing building, facing the zócalo in Mérida, is acknowledged to be the finest civil example of Spanish Plateresque architecture in Mexico.  Dated 1549 by an inscription,* the palace was built by Francisco de Montejo the Younger (El Mozo) son of the Adelantado Montejo, conqueror of Yucatán.

The profusely sculpted facade, all that now remains of the original structure, is divided into two tiers which together illustrate the eclectic characteristics of the Plateresque.
As developed in 14th and 15th century Spain, this movement drew on late Gothic, Moorish and early Renaissance sources to create an original and highly decorative style of architectural design and ornament. 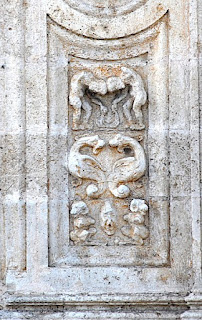 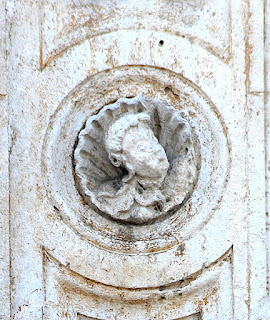 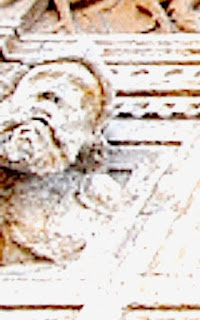 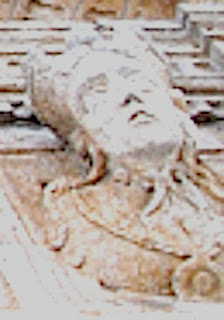 Two larger, flanking busts above the doorway are traditionally believed to be portraits of the Adelantado Montejo himself and his wife, Beatriz Álvarez de Herrera. 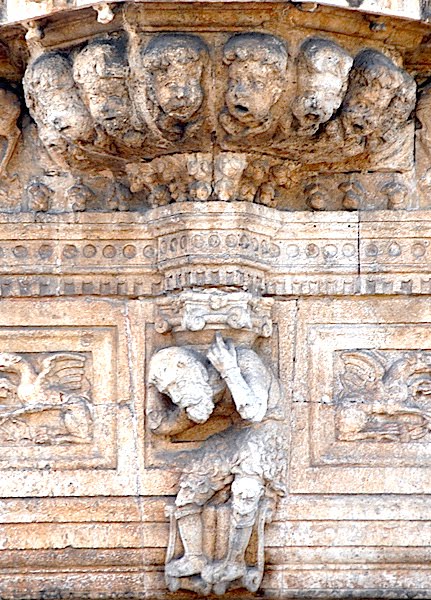 Atop this decorous scheme, however, a frieze of horned cherubs and grotesque animal heads strikes a jarring note, while above the doorway a bowed figure wearing sheepskins, possibly representing Hercules, holds up the corbeled second floor balcony, which sets the tone for the upper tier. 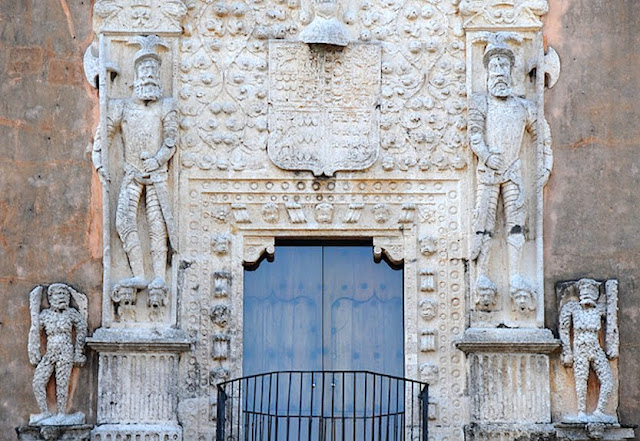 While contemporary with or even later than the lower facade, the more sculptural upper tier nevertheless harks back to the medieval and Moorish antecedents of the earlier Isabelline Plateresque manner, and although the stonecarving is less sophisticated, it holds great sculptural and historic interest.
A prominent escutcheon of the Montejo coat of arms, carved in shallow tequitqui relief, stands above the window, surmounted by an armorial helmet signifying the heroic nobility of the owner.
Granted to Montejo by the Emperor Charles V of Spain, the shield is traditionally quartered and features the Montejo crest as well as the those of both sides of the more highly ranked Herrera family of Seville to which his wife belonged.
Set against a stone tapestry of stylized vines hung with rattle-like fruits—an indigenous touch—the escutcheon includes the traditional lions and castles, as well as the Herrera family insignia of gold cauldrons and an olive tree.

Giant figures of helmeted Spanish halberdiers flank the entire upper level, their feet resting upon the heads of the vanquished, popularly thought to be Mayan Indians but more likely the heads of heretics in the European tradition.
Beside the halberdiers, "wild men" clad in rough sheepskins brandish rustic clubs. These familiar denizens of medieval European myth are often found in Spanish facades (notably the doorway of Avila cathedral and the front of the College of St. Gregory in Valladolid, Spain. 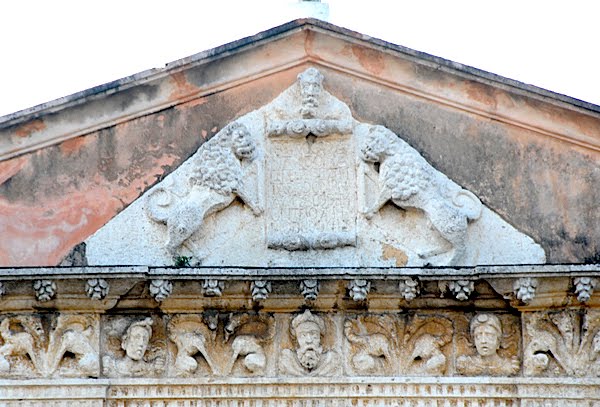 An eroded, inexpertly carved inscription, mounted in the crowning pediment and flanked by rampant, heraldic lions, proclaims: * "Esta obra mando hacer el adelantado don Francisco de Montejo año de MDXLIX" (1549)  (alternative date: MDLIV. 1554)
While much has been made of Maya influence on La Casa de Montejo—by one account more than 300 Mayan stonemasons, artisans and laborers worked to build the mansion and carve the front—the imagery is clearly European in origin and political in intent, designed to emphasize the military prowess and noble antecedents of the Montejo family at a time when the authority of the conquistadors was threatened by the Spanish crown and its officials.

Planning to visit Yucatán?  Take our guidebooks along
Posted by Richard Perry at 1:24 PM