In previous pages we have looked at churches of historic and artistic interest in Atlixco, Puebla, notably the monastery church of San Francisco and the Third Order chapel.
In our final post we visit another ornate baroque church there, that of La Merced.

La Merced
Of the 17th century Mercedarian convent in Atlixco, only the church remains intact. While most of the fabric of the church, including the decorative side door, dates from the 1600s, the spectacular front is 18th century.
Although conventional in its retablo format, the facade decoration is an extravaganza, its dazzling, painted stucco work rendered in colorful, popular baroque style—the most exuberant example of the style in Atlixco.
Paired columns, boldly carved with spiraling vines in high relief, enclose ornamental sculpture niches with popular statuary on both the lower and upper levels. Below, the columns flank a decorative doorway with a lobed Moorish arch. A richly carved frieze separates the two levels, replete with curling vines, foliage and cavorting cherubs. 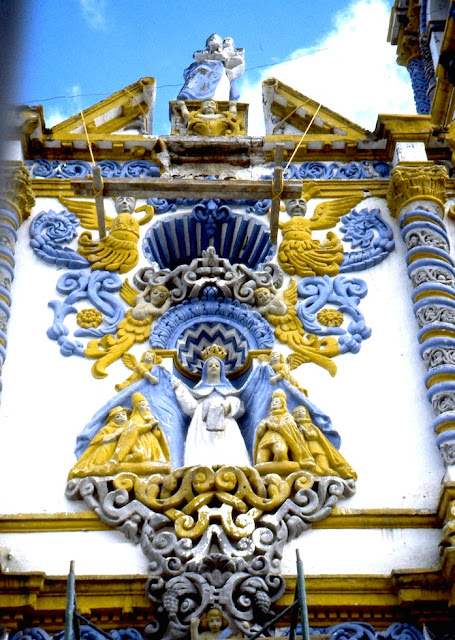 Between the columns above, an elaborate sculpture niche is set in a floral tapestry of carved stucco replete with hovering angels in foliage. The niche houses the figure of the Virgin of Mercy, who shelters Mercedarian saints, including San Pedro Nolasco the founder of the Order, beneath her spreading cloak.
A stone statue of St. Joseph and the Christ Child stands atop the facade, set between the cusps of a baroque pediment. A lofty tower of several tiers anchors the south side of the church front. 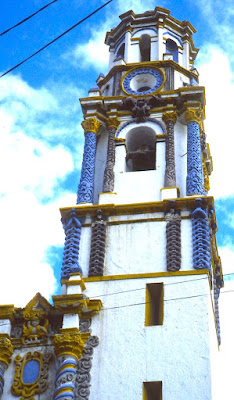 Despite an 19th century makeover, the interior retains a large colonial portrait of Our Lady of Mercy by the noted regional baroque painter José Joaquín Magón, as well as an exquisite octagonal pulpit of inlaid wood dating from the 1700s. 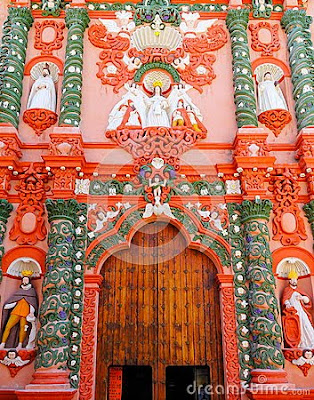 Note: The facade has recently been re-restored and its earlier hues of blue, white and gold repainted, to our eyes, in an unfortunate mix of bright red, green and pink.

text © 2016 Richard D. Perry
original images by the author  and Carolyn Brown with thanks.
church video
Posted by Richard Perry at 8:54 AM