Despite their success at Cuernavaca, the Franciscans erected few other monasteries within the boundaries of present-day Morelos. Their only other important house was located at San Francisco Tlaquiltenango, in the tropical sugar country to the south.
However in 1573 the Dominicans wrested control of the monastery from the Franciscans, who after ten years briefly regained control, only to lose it again to the Dominicans in 1590.

This ongoing conflict, with intervals of occupation by both Orders, is reflected in the Dominican repainting of much of the mural decoration within the monastery, which we examined in a post on our sister site.
However, the basic architecture of the monastery is clearly Franciscan, as evidence its austere, fortress like appearance, and in particular, its open chapel and the distinctive south doorway, which are the focus of this post. 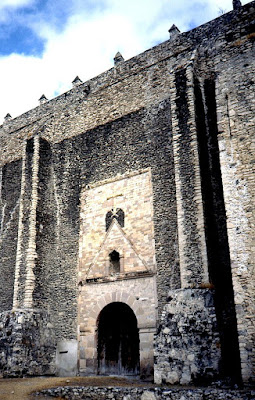 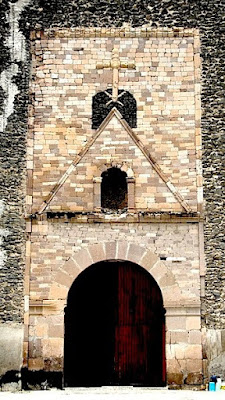 © Richard Perry 1987
The South Doorway
The monumental south side of the church is a windowless wall of irregular dark basalt braced at intervals by narrow buttresses edged with white quoining. This rhythm is broken by the pedimented south porch, a country cousin of the great north doorway at Cuernavaca. 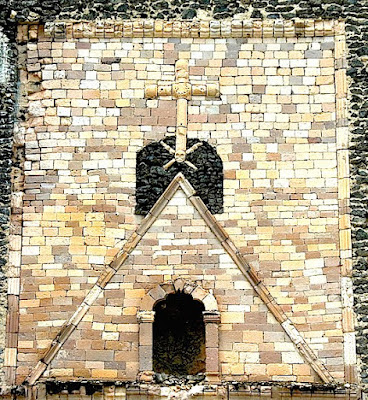 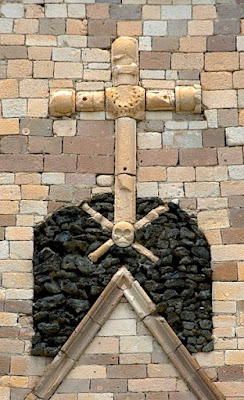 © Niccolò Brooker
The surmounting alfiz frames a Calvary cross, mounted on a simulated cairn of black boulders atop a skull and bones, and carved with stylized, pierced wounds and a crown of thorns at the crossing.
The Open Chapel
Above the convento entry we can still glimpse the recessed archway of the elevated open chapel, also framed by an alfiz that encloses carved reliefs of the Five Wounds and the Cristogram in the center, ringed by the Franciscan cord.
An undulating vine with carved fruit and leaves snakes around the arch sprouting from an archaic “sliced mushroom” emblem at the base. 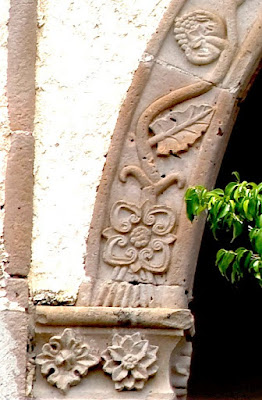 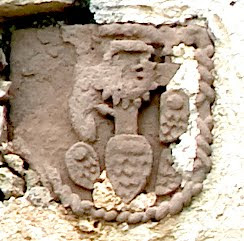