The Chapel Altarpiece
Like the portal discussed in our previous post, the Rayas chapel's magnificent gilded retablo is presumed to have been designed by Felipe de Ureña,* or his son-in-law Juan García de Castañeda, and fabricated in the family workshop.
Like so many other colonial arts and furnishings in Guanajuato, this altarpiece is now no longer in place, either in the chapel or even in Mexico. During the 1920s—a period of religious repression and one of considerable peril for religious art—the altarpiece was purchased and exported by an American collector. Fortunately it has been carefully preserved and is now located in the St. Francis wedding chapel of the Mission Inn in Riverside, California.
As with other Ureña altarpieces, prominent estípite pilasters frame the retablo, projecting forward and extending through two tiers, thus drawing attention inward to the center and its abundant baroque statuary—an effect amplified by recessing broken arches of densely carved and richly gilded ornament.
This elegant configuration is similar, although less opulent and on a reduced scale, to that of the magnificent retablos of La Valenciana, works of undocumented authorship but presumed to have been fabricated by the Ureña taller, probably to a design by Felipe or his son Francisco Bruno.
The iconography of the retablo echoes that of the chapel portal and is related to the Cata retablos. Although the principal image, no doubt of the Virgin of Sorrows, is missing we can still admire the accompanying figures of her richly appareled parents, Sts Joachim and Anna, both expertly carved, painted and finished in classic Mexican estofado manner. 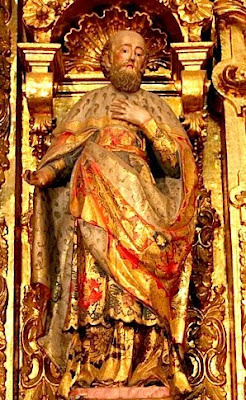 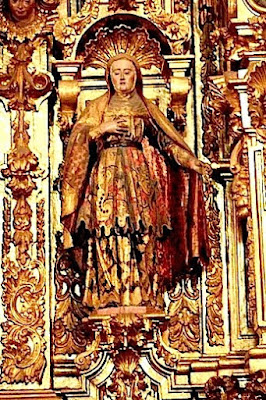 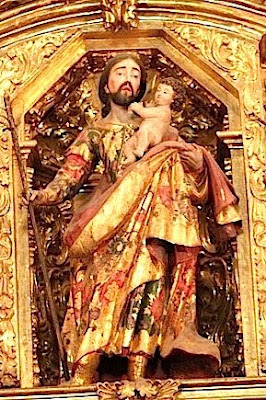 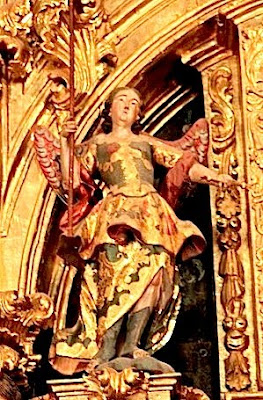 St. Joseph and the archangel Michael
Together with the swaying figure of St. Joseph with the Christ child in the central niche, flanked by archangels, this grouping, as in the Rayas chapel entry, completes the depiction of the Five Lords. Statues of the Franciscan saints Francis and Anthony of Padua stand on either side. 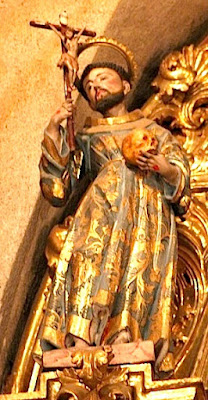 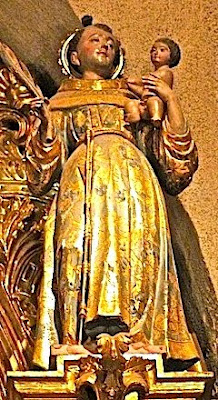 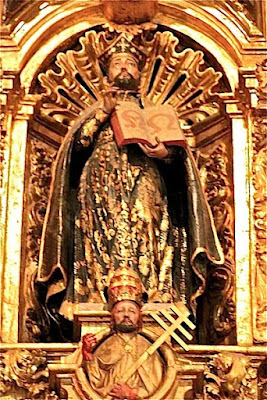 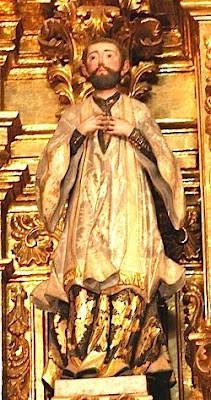 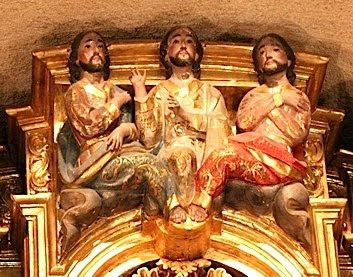 Finally, the crowning relief depicts the Holy Trinity as three identical bearded young men in the traditional Mexican fashion (1).
This superb and well preserved Mexican altarpiece is the finest example of its genre in the United States.

(1) This representation, originally promoted to combat heresy and signify the Church Triumphant, was initially deemed appropriate for newly converted peoples, especially in the Americas. Ironically, by the 1700s, this depiction was itself was considered heretical and officially banned by the Church, although to little effect in Mexico.
*Known as El maestro transhumante, the "peripatetic master", Felipe de Ureña was the most influential of the Mexican born architect /designers to introduce and expand the Churrigueresque style into New Spain. During the second half of the 18th century, together with family members, he was primarily responsible for the spread and subsequent evolution of this ornate late baroque style into cities across Mexico, especially along the silver routes north of Mexico City. Primarily an innovative designer and fabricator of altarpieces, he later adapted the barroco estípite style as it was called, for church facades. His elegant and distinctive designs are recognized and known as the felipense style.

text © 2017 Richard D. Perry.  graphic by Antonio Parra
color images by the author and Robert Guess by kind permission
Posted by Richard Perry at 9:24 AM