For our second post on El Templo de San Juan de Rayas we track down two of the original altarpieces, now, like so many other parts of the chapel, located elsewhere.
The Altarpieces
Although the fate of the main altarpiece—there must have been one—is unfortunately unknown, two of its elegant side altars have luckily survived and are now located in the transepts of the nearby Santuario de Villaseca (Cata), another silver chapel.

The overall design of the two retablos is virtually identical and follows closely that of the Rayas temple facade. Both follow the classic barroco estípite style of the late 1700s, framed by slender, paired estípites, stalactite like lambrequins and flamboyantly scrolled pediments, and both may confidently be attributed to the Ureña workshop.*
The retablos have related themes: one is dedicated to Christ portrayed as the Man of Sorrows, and the other to Our Lady of Sorrows (La Dolores)—to whom the Sardaneta family was especially devoted.
The Man of Sorrows altarpiece has been modified with the hollowing out of the side niches to accommodate modern statuary.
However, the humble portraits in the medallions below are original and no doubt portray the Marqués de San Juan de Rayas and his wife, rather than members of the Villaseca family of Cata. 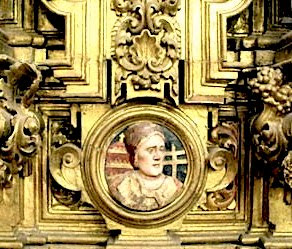 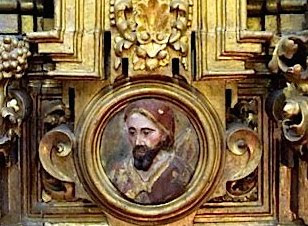 By contrast, the Dolores retablo appears to be in its original state, featuring outsize niche-pilasters with large, painted reliefs of Saints Joachim and Anna—the parents of the Virgin Mary. Although the reliefs are elaborately framed in ornate, rocaille cartouches, the portraits themselves are posed in an unassuming, popular style. 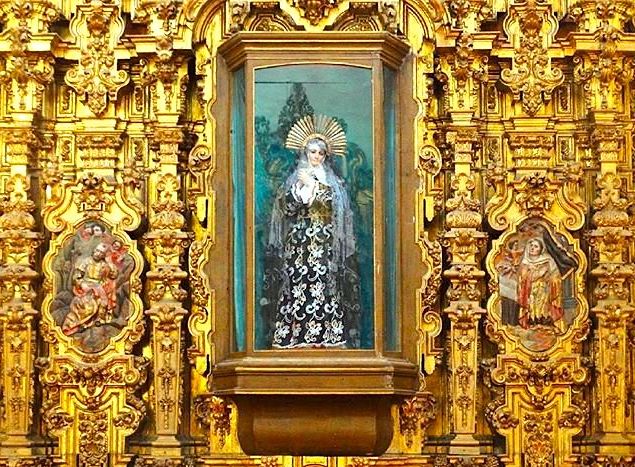 *Known as El maestro transhumante, the "peripatetic master", Felipe de Ureña was the most influential of the Mexican born architect /designers to introduce and expand the Churrigueresque style into New Spain. During the second half of the 18th century, together with family members, he was primarily responsible for the spread and subsequent evolution of this ornate late baroque style into cities across Mexico, especially along the silver routes north of Mexico City.
Primarily an innovative designer and fabricator of altarpieces, he later adapted the barroco estípite style as it was called, for church facades. His elegant and distinctive designs are recognized and known as the felipense style.