The Tlaxcalan Altarpieces: Miracle at Metepec

San Diego de Metepec
This modest 18th c. church, located 5 kms NW of the city of Tlaxcala, marks the site of a 17th century miracle, among the first to be fully documented in post conquest Mexico.
A remarkable altarpiece inside the church features a series of painted reliefs that illustrate the miracle, which involved the Franciscan saint San Diego de Alcalá and a local Indian woman named Maria Jacoba.
The Miracle
According to the contemporary document, one day in 1611 a convalescent itinerant Indian painter lodged in the family house in Metepec of a young Tlaxcalan woman named María Jacoba, who was paralysed in the legs and unable to walk.
During his recovery the painter was instructed in a dream by San Diego de Alcalá, the recently canonized Spanish Franciscan brother and healer to whom the artist had prayed, to paint his image on the entry of the family chapel, which was duly done.
Then one day, when Maria was grinding corn inside the house, she heard the voice of the saint summoning her to rise and walk outside, which she did. The miracle caused a sensation and the church was re-dedicated to San Diego the healer.
At the time of the miracle, only 25 years after his canonization, San Diego enjoyed high visibility and popular devotion. The humble healer was promoted by the Franciscans to enhance their prestige, especially among the native peoples to whom they ministered.
In time the new church was built and the costly retablo created to celebrate the miracle and accommodate the pilgrims who came in hopes of relieving their own ills.
The Church
The church was built in the 1740s and 1750s, either on the site of the miracle or more likely, replacing an earlier mission dedicated to St. Gregory—a former visita of the main Franciscan monastery of San Francisco de Tlaxcala.
Set against a tiled facade in the Pueblan style, the imposing west doorway and surmounting choir window are fashioned from the roseate local stone. The archway of the baroque doorway is carved with vines and bears a tiny image of the Christ Child. A diminutive statue of San Diego de Alcalá, holding a basket and a foliated cross, stands in a niche above the ornamental choir window flanked by a pair of awkwardly carved, rampant lions? and outlying heraldic escutcheons. 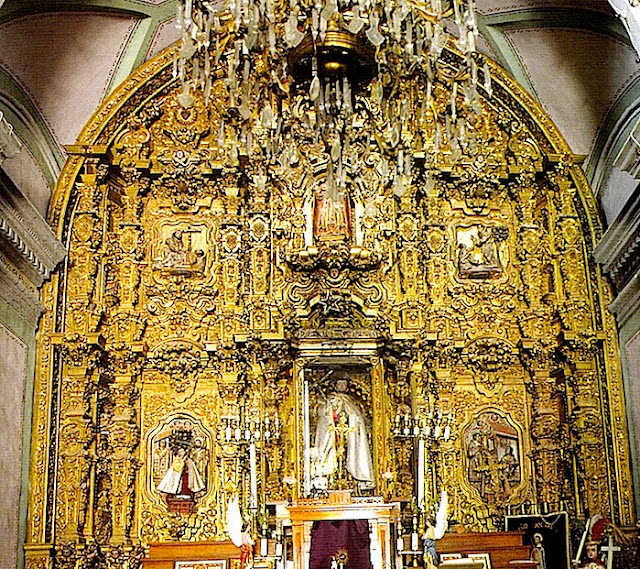 The Main Retablo
Dated 1773, this richly carved and gilded Churrigueresque style altarpiece fills the apse and is a masterpiece of late baroque design and workmanship.
Surrounding the image of San Diego in the center niche, four large lateral panels of polychrome reliefs set in complex mixtlinear frames with accompanying inscriptions relate the story of the miracle. 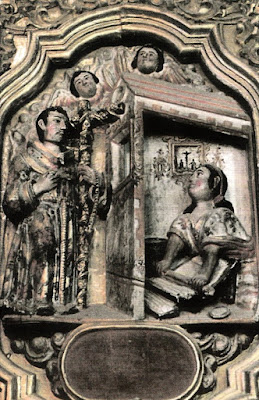 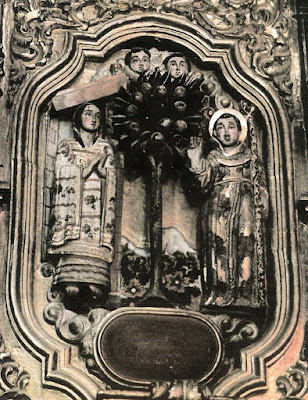 Part of the legend records that San Diego ordered that an orange tree growing outside the native compound be preserved in his honor and never chopped down, a detail that explains the presence of the tree in the reliefs.  Also present is a foliated or vineclad cross—the traditional attribute of San Diego de Alcalá.
text © 2019 Richard D. Perry
color images from online sources
Posted by Richard Perry at 1:00 PM