The Altarpieces of Yucatan: Izamal

In our earlier series on the altarpieces of Yucatán * we neglected to include those at Izamal, one of the handful of major Franciscan monasteries in the peninsula.  We remedy this omission in this post.

Built by the controversial Bishop Landa in the 1550s, the great church and adjacent convento of Izamal are sited atop a vast former Maya pyramid, known as Papholchac (House of Heads and Lightning)
It was dedicated to the Virgin of Izamal, a miraculous image from Guatemala, and in colonial times became a major Marian shrine and center of pilgrimage in the region. 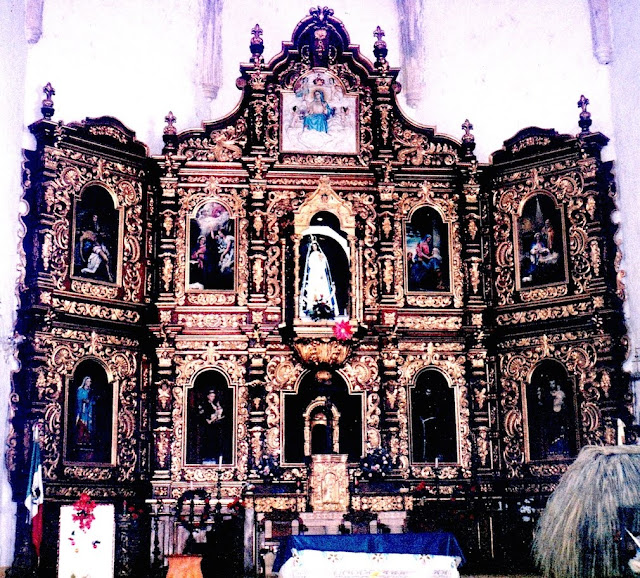 The Main Altarpiece
Like that at San Bernardino de Sisal, the grand main retablo at Izamal dates from later colonial times. Although evenly compartmented in conventional baroque style, it is framed by estípite columns typical of the later 1700s.
Constructed in two main tiers with a predella below and an elaborate gable above, the altarpiece has identical wings that cant forward on either side. 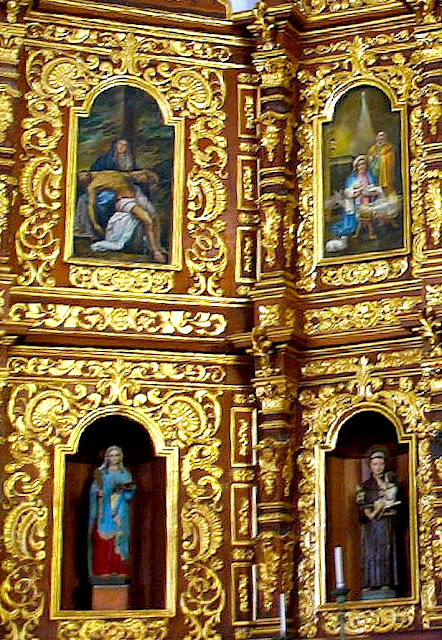 In addition to the venerated figure of the Virgin in the principal niche, the other, classically framed niches showcase statues of Franciscan saints in the lower tier, and painted scenes from the life of the Virgin in the upper tier.
Like that at the San Bernardino too, the altarpiece boasts the characteristically Yucatecan burgundy and gold color scheme.
text © 2002/2021 Richard D. Perry
photography by the author

for more on Yucatán consult our guidebooks
Posted by Richard Perry at 10:29 AM