More than thirty years ago, in 1987, we spent two days exploring and photographing this great Dominican monastery in the northern foothills of Morelos, just a few hours from Mexico City.
While much has changed  in Tepoztlán since then—now an even more popular weekend destination for capitalinos—the monastic precincts, despite some restoration efforts, retain their somber, weathered mystery and rich stone carving.
In this post we present a portfolio of some of the black and white photographs we took on that occasion, now published for the first time. Enjoy.
In 1987 the bare atrium, unrestored open chapel and rain streaked walls retained their unadorned 16th century ambience.
The sculpted west porch is one of the masterpieces of what might be called the Mexican Plateresque. Its sophisticated framework combines Renaissance elements—fluted Ionic pilasters, paneled jambs and dentilled cornices—with Gothic details such as slender colonettes, and the sharply pointed pediment.
In contrast, the relief carving bears the unmistakeable hallmark of the indigenous craftsman. The elongated, expressionless saints, the densely sculpted ornament, the patterned wings and drapery of the angels—all are classic examples of native tequitqui work of the highest order. 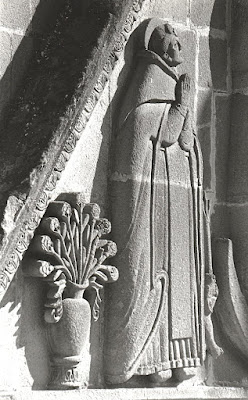 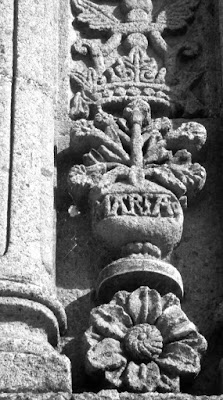 The Virgin of the Nativity stands on the crescent moon in the center, cradling the infant Christ, whose halo resembles an Indian feathered headdress. On her left, St. Dominic stands in prayer, an eight-pointed star upon his forehead and his dog by his side.
Jars of lilies, emblems of purity, stand in the angles of the pediment. 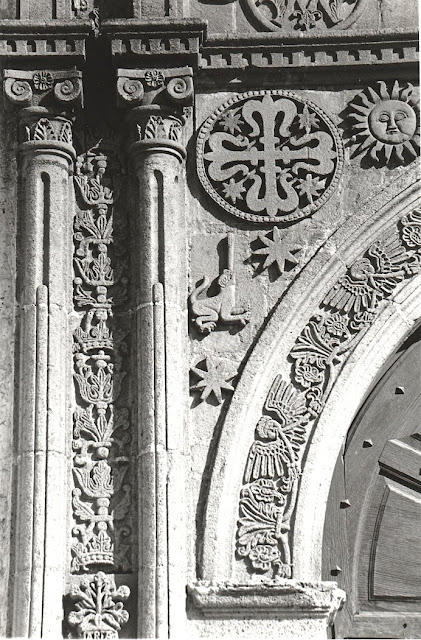 Iconographically, the porch links the cult of the Virgin Mary with the Dominican Order. A catalog of Marian symbols—the sun, the moon and the eight-pointed stars of piety and divinity—appear in the spandrels of the doorway beside the Dominican cross of Alcántara and little Dominican dogs clenching torches between their teeth. 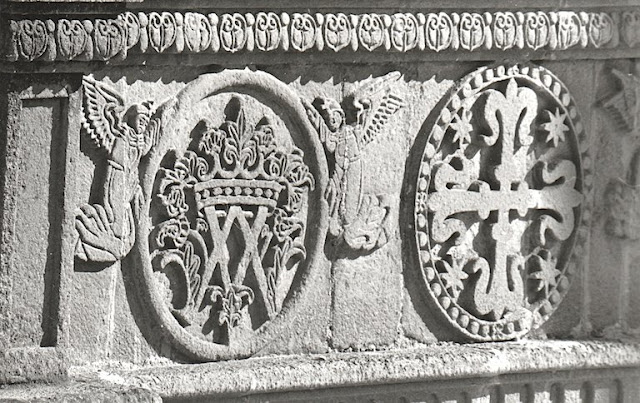 Medallions of the fleur-de-lis cross alternate along the frieze above with monograms of the Virgin presented by fluttering angels—smaller versions of the giant reliefs overhead. 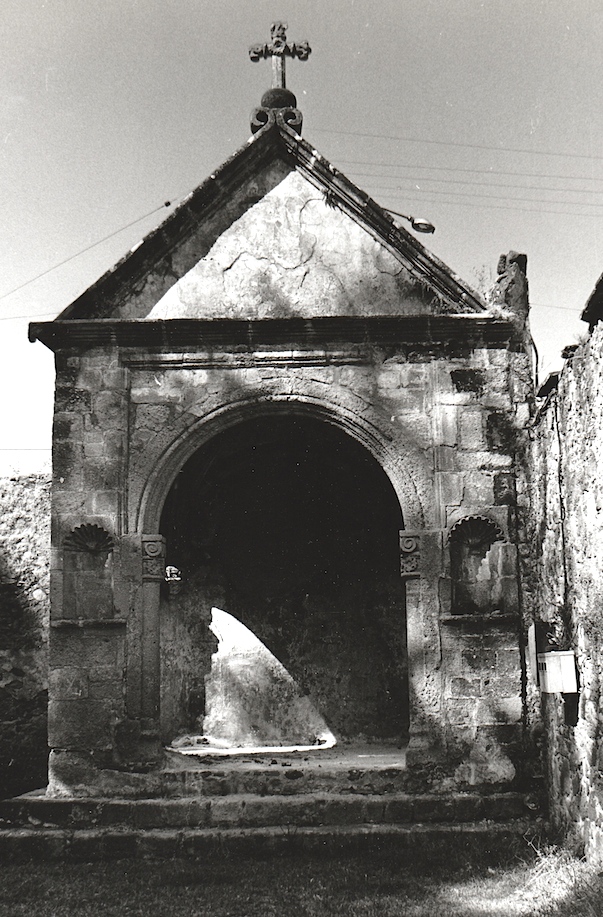 north west posa
Only two of the four original posa chapels survive in the atrium. The first, in the north west corner, boasts sculpted archways springing from Ionic capitals with bands of rosettes, shell niches and a carved stone cross atop the crowning pediment. 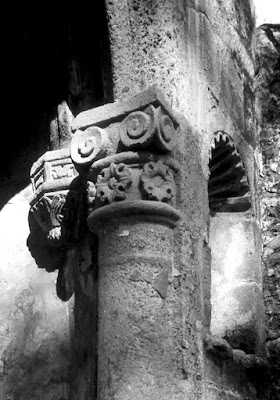 The second is ingeniously integrated into the portería, or convento entry on the north side of the church. 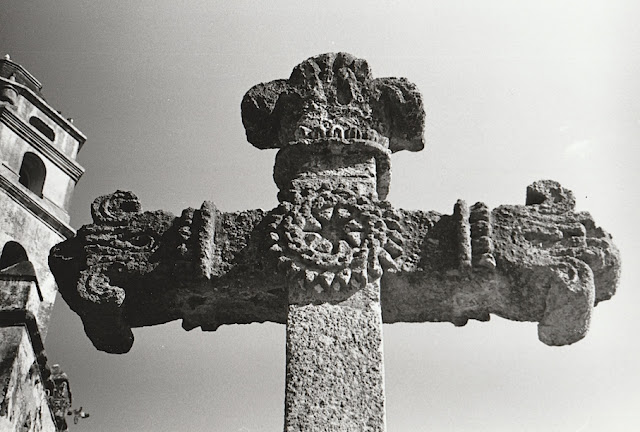 Other sculptures include the eroded atrium cross, standing in front of the abandoned open chapel, a larger version of the posa cross with fleur-de-lis finials and a wreath like crown of thorns at the axis. 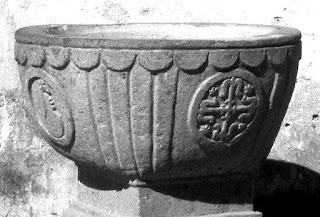 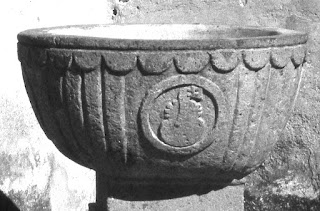 Another early object in the atrium, beside the convento entry, is the old baptismal font, which is carved with relief medallions of the Dominican cross and the ancient place glyph of Tepoztlán ("Cleft by Copper Axes") 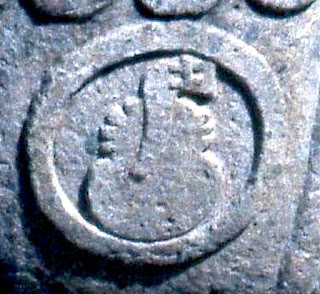 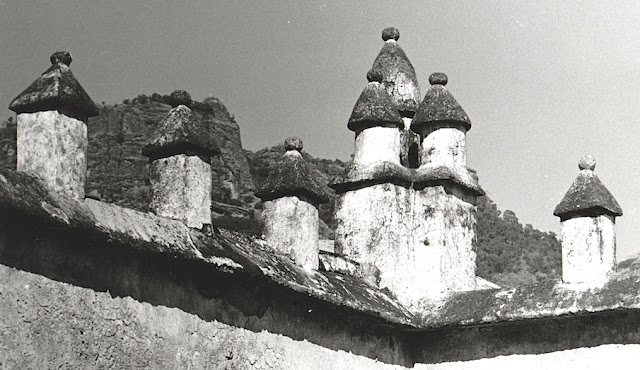 Clusters of mushroom like merlons capped with cannonball orbs surmount the walls and gateways throughout the monastery complex. 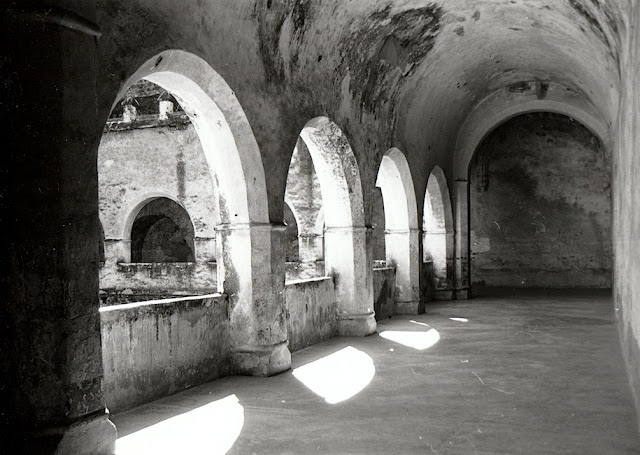 The cloister is starkly plain, its beveled arcades without moldings or carving. Long barrel vaults are relieved by faded red outlines of painted artesonado ceilings with stars and rosettes. 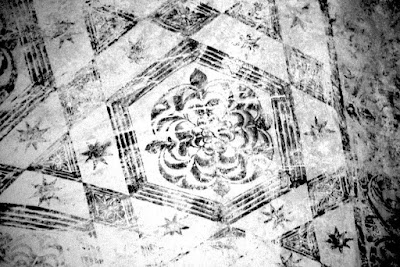 The austere friars' cells are spacious enough, some fitted with window seats that frame the nearby bluffs of the scenic Tepozteco range. 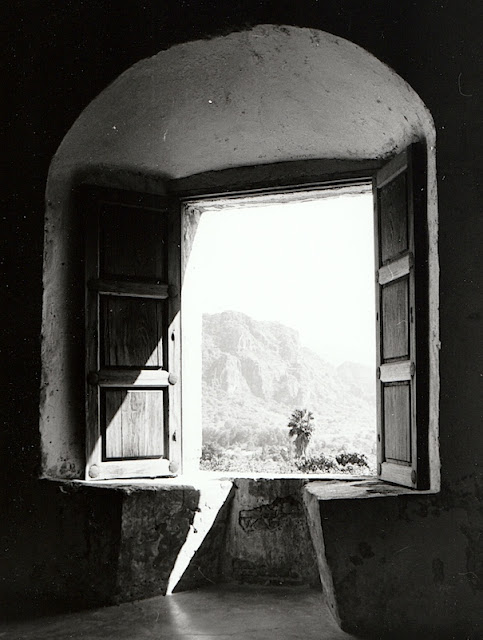