Xoxoteco: The Expulsion from Paradise

The chapel of Santa Maria Xoxoteco in the Sierra Alta region of Hidalgo contains some of the most remarkable murals in Mexico.  Uncovered only a few decades ago under layers of whitewash, the walls are alive with vivid, colorful murals that depict in a most graphic manner the punishments that await the unrepentant sinner.

In a new series of posts we explore some of the themes in these murals, comparing and contrasting them with similar colonial murals elsewhere in Mexico.

The Expulsion from Paradise
Among the sunnier frescoes at Xoxoteco is the cautionary scene depicting the original sin of Adam and Eve, and their subsequent expulsion from the Garden of Eden.

The Xoxoteco mural is closely based on, and possibly created by the same artist(s) as the best known of early New World murals on this subject, that is the panel on the end wall of the grand open chapel at nearby Actopan (Hidalgo).
In this classic depiction, the naked Adam and Eve pluck apples from the Tree of Knowledge encircled by the snake on the left. God throws up his hands in the cloud above the tree. St Michael, in the center cloud, waves his sword at the now partly clothed banished pair on the right.

This scene at Xoxoteco employs much the same imagery but with a local flavor.  The snake wound around the Tree bears the same face and flowing golden hair as Eve.
God gestures in alarm from above and the Archangel Michael, here partly effaced, aims rays at the fleeing couple from the cloud on the right. 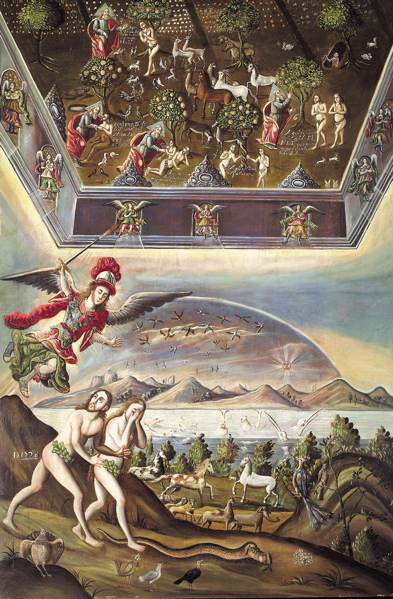 The Expulsion from the Garden is graphically shown in this superb late colonial painting from San Juan Tepemazalco, also in Hidalgo. Stolen from the church some years ago, it was later recovered, restored and returned to its home.
In the upper part of the painting, a heavenly vault guarded by archangels—possibly a representation of the celestial City of Jerusalem—opens to a view of Eden at the time of the Creation. God is portrayed in several scenes, creating Adam and then Eve from Adam's side, in an idyllic landscape of orchards and peaceable birds and beasts.
The lower section shows the Expulsion, in a lacustrine landcape of trees and volcanic peaks teeming with a variety of birds, beasts and fishes—some acutely observed, others imagined but obviously never seen by the artist.
The Archangel Michael, resplendent in a windblown red, blue and green costume, drives Adam, Eve and the snake forth with his fiery sword. The dove of the Holy Spirit hovers above the scene, almost lost among the flocks of birds in the sky.
Although clearly stylized, the earthly landscape may represent the Valley of Mexico and Lake Texcoco as they might have appeared in the early 1700s.