Xoxoteco: The Jaws of Hell

As we noted in our earlier post, the tiny chapel of Santa Maria Xoxoteco is the repository of some of the most remarkable murals in Mexico.  Uncovered only a few decades ago under layers of whitewash, the walls are covered with vivid, colorful but cautionary murals.

The Jaws of Hell
Previously we looked at the Expulsion from Eden on the apsidal wall. This area is also devoted to an expansive Last Judgment scene, and in this post we look at one dramatic segment: the Jaws of Hell, and compare it with other such portrayals in early Mexican murals 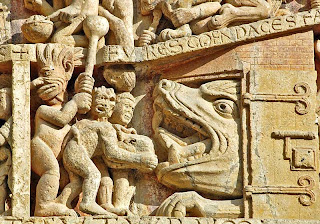 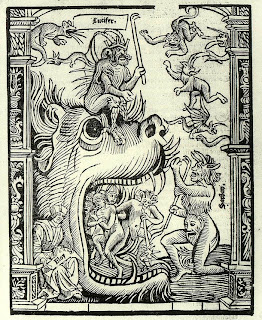 In medieval times the entrance to Hell was often envisaged as the gaping mouth of a huge monster, and remained common in depictions of the Last Judgment and Harrowing of Hell until the Renaissance.

The sea monster Leviathan, a monstrous animal whose mouth swallows the damned during the Last Judgement, was also conflated with this imagery.

In the Catholic evangelization of the New World, this scene was often popularly portrayed in graphic, apocalyptic murals like those of Xoxoteco and Actopan, primarily as a means of impressing the native converts with the consequences of sin and the horrors of Hell.

The somewhat faded but animated example above, from the east wall at Xoxoteco, depicts the souls of the damned being flung by demons into the open Hellmouth, there to be consumed by flames. The sharp teeth, upturned snout and wide eyes of the monster add to the drama.

In this related, although fragmentary scene from the painted open chapel at Actopan, one can almost hear the fearsome jaws snapping shut on the hapless souls being pushed down by the attendant devils.

By contrast, this scene of the Harrowing of Hell from the cloister murals at Tepetlaoxtoc shows the risen Christ ministering to the damned already trapped in the Hellmouth. Again the flames issuing from its mouth, with the sharp fangs and staring eye of the beast add to the sense of dread.

In this detail from the so-called Miracle of the Rosary mural at the mountain mission of Tetela del Volcán in Morelos, curling flames and the fearsome fangs and snout of the monster are again prominently displayed although the souls in its maw look less than terrified! 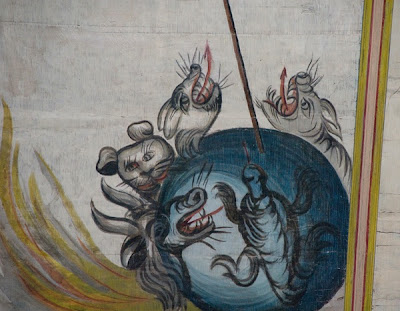 Finally, in the corner of a ceiling panel at San Lorenzo, in western Michoacán, the diabolical denizens of a bubble like, watery underworld—in the guise of familiar animals notwithstanding their fangs and spearlike tongues—appear less menacing and almost benevolent.