Opposite each other beneath the choir at the west end of the church are a pair of smaller retablos: those of San Isidro and Santa Lucia.
Although they essentially follow the same format as the other nave retablos, but on a smaller scale, they are probably the latest in date and certainly the most extreme examples of the anástilo manner in the church.
The principal saints' statues are contained in an arched center vitrine, flanked by secondary figures including angels emerging from almost hidden niche-pilasters.
In these retablos the framing arch, ringed by a chain molding of floral bouquets, seems de-emphasized, overshadowed by the ornamental gable and its animated statuary. 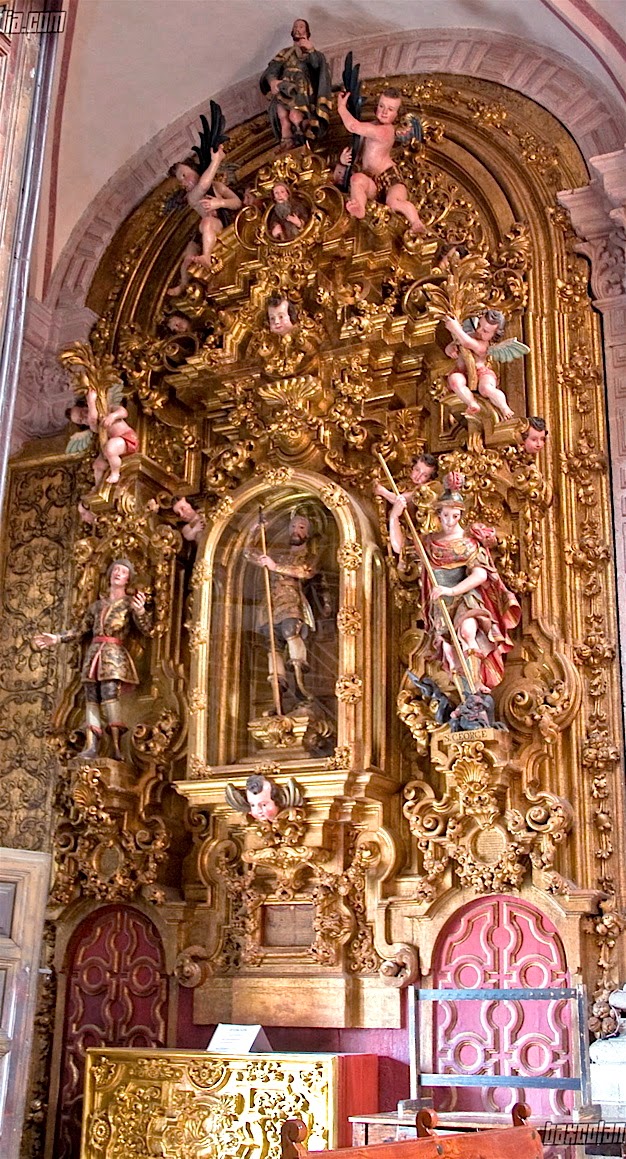 San Isidro
The retablo of San Isidro—the patron saint of farmers—is the most complete of the two. The enclosed central figure of the saint, clutching his staff, is flanked on his left by a colorful and dynamic statue of St. George, who steps out with flying drapery and lance to spear the squirming dragon under his feet. 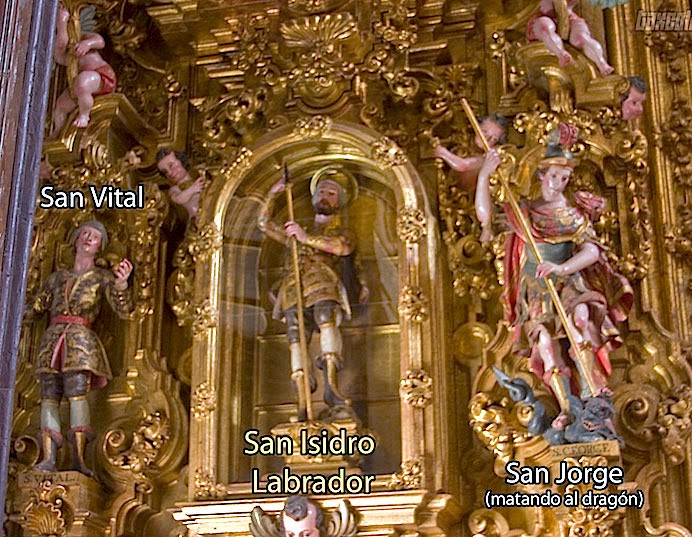 The upper section features a statue of San Roque. In the center medallion, flanked by projecting angels with martyrs' palms, is a cowled bust of the bearded hermit and healer San Antonio Abad. Both saints are traditional protectors against injury and disease. 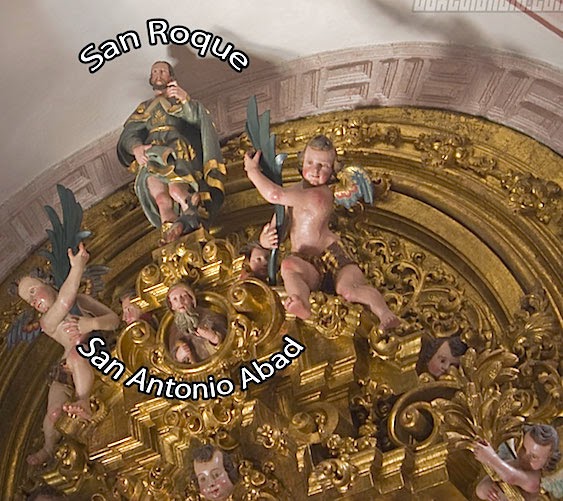 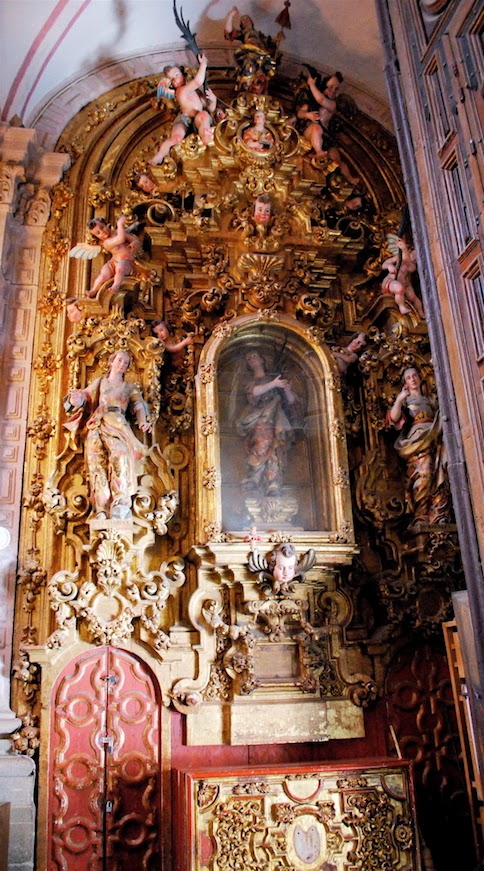 Santa Lucia
The second altarpiece is dedicated to the Virgin Martyrs of the early Church—St. Lucy in the center niche is accompanied by Sts. Barbara and Catherine of Alexandria, all in flowing garments but also lacking their identifying attributes. 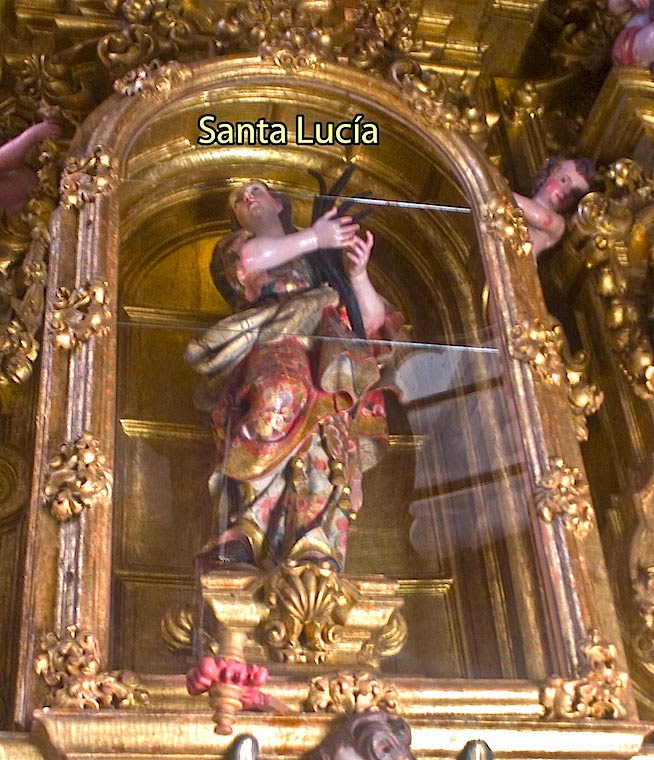 St. Ursula occupies the top of the retablo, once more flanked by animated angels brandishing martyrs' palms, along with a bust of St Agnes. 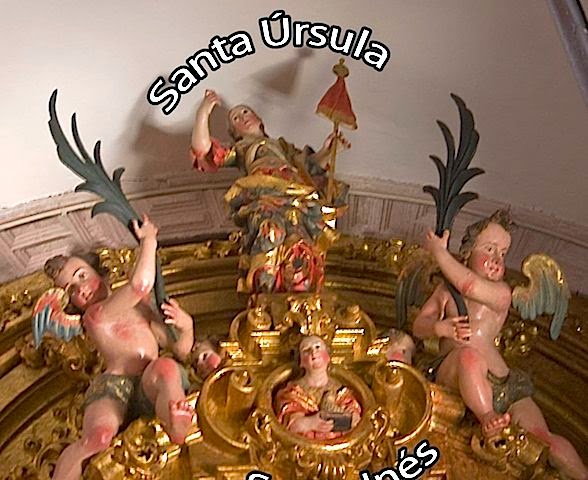 We accept no ads. If you enjoy our posts you may support our efforts
by buying our guidebooks on colonial Mexico
Posted by Richard Perry at 4:36 PM