The present 17th century church of San Cosme began life as a modest hospital chapel, founded in 1535 by Bishop Juan de Zumárraga as part of a hospice serving indigenous residents and pilgrims. Appropriately, the chapel was dedicated to the martyrs Cosmas and Damian, patron saints of physicians and medical care.

Late in the 1600s the Franciscans rebuilt the present church as a shrine to the miraculous wooden image of Our Lady of Consolation. 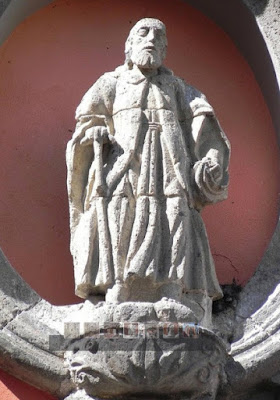 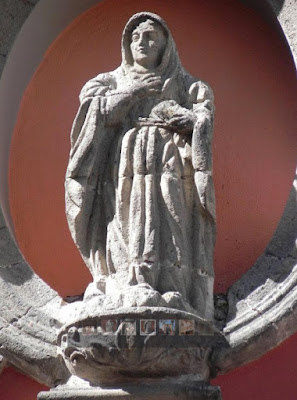 The Facade
The narrow church front is dominated by a grand relief of the Holy Family, set in a square, eared frame, flanked by statues of Saints Joachim and Anne in oval frames. A smaller statue of the Virgin Mary occupies the moorish style niche overhead.
The Main Altarpiece

The church has retained some of its altarpieces, mostly in late baroque “churrigueresque” style. The original main altarpiece, believed to have been designed by the baroque master Felipe de Ureña, was replaced in the 1880s by another baroque altarpiece in a later style, transferred from the Carmelite church of San Joaquín in Naucalpan.
The gilded altarpiece, whose designer is unknown, is framed in a highly ornate late 18th century manner with elongated estípite pilasters enclosing expansive niche-pilasters filled with polychrome statues and relief portraits. Putti and angel heads appear throughout. 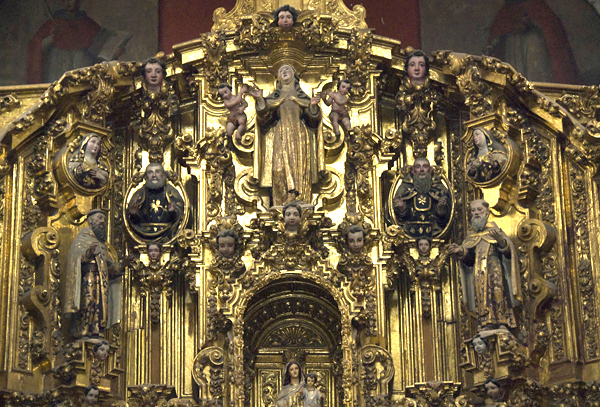 Reflecting its Carmelite origins, much of the imagery relates to that Order, most prominently the statues of St. Teresa, the founder, in the uppermost niche and Our Lady of Mount Carmel holding a scapular in the niche below.
An image of the Sacred Heart of Jesus occupies the center niche. which is framed by an elaborate canopy enclosing a bust of St. Thomas Aquinas. Busts, medallions and full length statues of numerous Catholic saints, notable and obscure, fill the other spaces.
Although Saints Cosmas and Damian do not feature in the altarpiece, earlier murals depicting the two martyrs can still be glimpsed on the space behind it.  Since the imported San Joaquín altarpiece did not reach up the vault, a gilded crest was added to help fill the space, now showcasing a bloody image of the Crucified Christ. 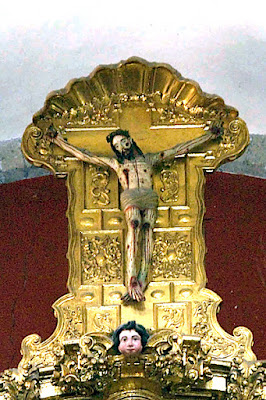