Oaxaca. San Pablo then and now 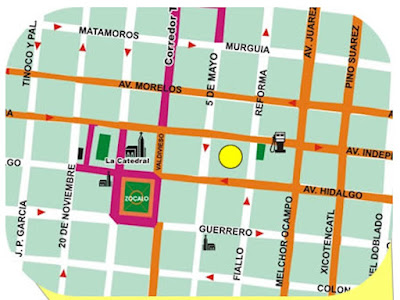 The early years in Oaxaca were difficult ones for the Dominican Order.  A handful of friars arrived here in 1529 and quickly put up an adobe chapel, dedicated to St. Paul (San Pablo), not far from the main square (zócalo).  But because of limited space, by 1550 the Dominicans had decided to build a new priory on a large grant of land situated on higher ground, where the priory of Santo Domingo now stands.
Although San Pablo remained the main residence and training center for the friars until the end of the century, in 1603 and 1608 catastrophic earthquakes struck the city and severely damaged the mission of San Pablo as well as the Santo Domingo. The friars were forced to seek refuge in the monastery of Cuilapan, then under construction just outside the city.

By 1617 however, reconstruction began of a larger church, using the surviving walls while extending the nave and adding new chapels. By mid century the convento was  enlarged and the entries refashioned in sober classical style.
Space in the old historic center remained limited, however, in part due to the friars selling some of the land to fund the reconstruction.  Another major quake in 1696 struck the monastery, causing the church roof to collapse; although reconstruction ensued, this time to include a Rosary chapel, it reopened in 1728.

Relations between the friars and the diocesan clergy worsened in late colonial times, and the Dominicans gradually lost control of the native parishes that had been their stronghold. The final blow fell in 1856 when the convento was ordered closed under the Reform.
By 1900 a new road (Reforma/Fiallo) was cut through and new residences and workshops began to occupy the former San Pablo property. During the last century its precincts were invaded by private construction, a hotel and a parking lot. Several of the buildings were demolished, including part of the church, and by 2000 the historic former Dominican mission had virtually disappeared from view and its existence almost forgotten, although some of the old doorways remained to be discovered by persistent visitors*.
Between 2006 and 2011, the Harp Helu Foundation undertook the clearing of the mission precincts and began reconstruction, as far as was feasible, of the church buildings.
These included the surviving part of the nave, the Rosary chapel and the partial rebuilding and repurposing of the former cloister as the Centro Cultural San Pablo, now housing the Helu Foundation offices as well as other research and museum display areas. 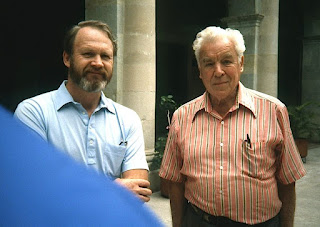 * In 1990 your author, in company with Ross Parmenter, the noted researcher and writer on Oaxaca, managed to gain entry to a private bodega to photograph the surviving San Pablo doorways, which remained in remarkably good condition.