From time to time we take a look at modest rural churches in Mexico with colonial antecedents that are overlooked by most students of viceregal art and architecture, but that often possess special features of artistic and historic interest. We like to call them Hidden Gems.*
Santo Tomás Tetliztaca
Hill of White Stone
Situated on a highway east of Zempoala, in the state of Hidalgo, this ancient community, now known simply as Santo Tomás, is historically noted for its 1581 map, on which the 16th century church prominently appears. 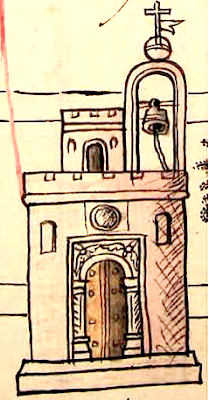 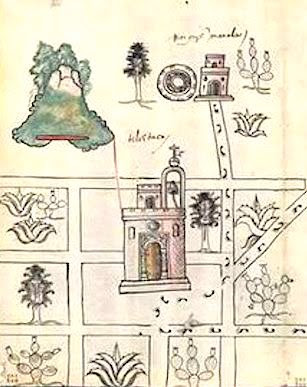 
Early colonial churches were often linked in the native mind, as in their pictorial records, with local sacred mountains and caves. This is made explicit in the Tetliztaca map, where a red line physically joins the church to the white capped mountain referenced in the original place name. 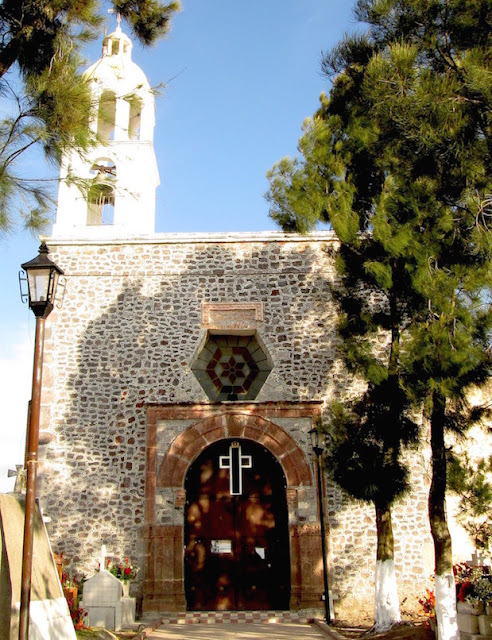 In the case of Santo Tomás, this identification is even clearer if we look at the sculpted doorway of the church, which could also be viewed as the entrance to a sacred mountain or cave.
In fact the entire convento,* originally established by the Franciscans as a visita of the monastery at Zempoala, may be founded on the site of an ancient temple, since at one time a long flight of steps led up to the gateway of the raised atrium. 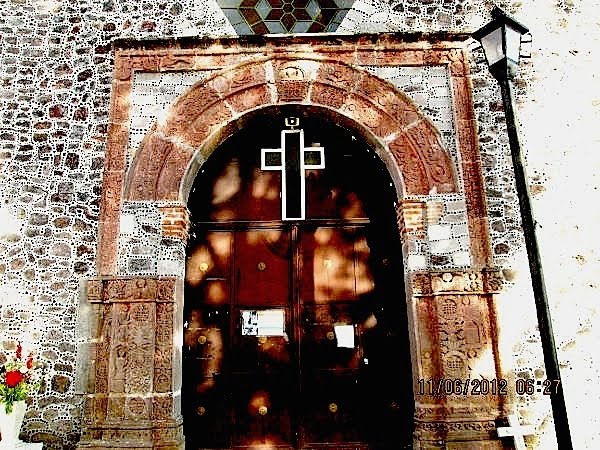 While the church front is generally plain, following much later remodeling, passages of the original 16th century architectural decoration remain, most notably the remarkably detailed entry.
Reminiscent of similar early entries, the arched doorway, carved from reddish stone, is supported on broad triple jambs and surmounted by a rectangular alfiz—sections which may also have been raised at one time. 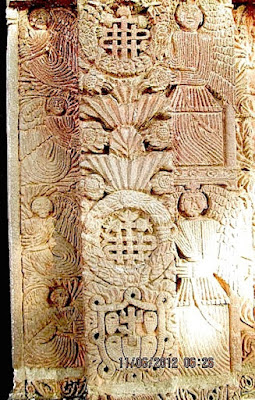 The complex imagery of this entry serves to link the Franciscan evangelical mission with the story of Christ's Passion.
Each element of the doorway is densely carved with bands of stylized figures and foliage. Both jambs feature a projecting center pilaster, prominently linking the Franciscan emblem of the Five Wounds, framed by a knotted cord, with Christic monograms encased in circular wreaths. Each pilaster capped by a praying, winged angel with pronounced Indian features.

These are flanked by panels of highly stylized reliefs of supporting Angels of the Apocalypse, carved in a dense tequitqui manner, also with indigenous visages. Reliefs of lush foliage and blossoms adorn the inner bands as well as the outer capitals of the jambs. 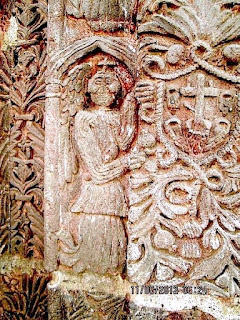 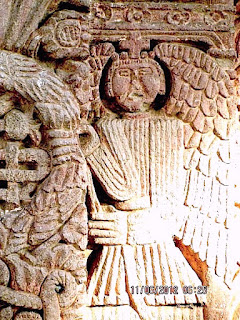 A double band of angeles pasionarios in similar style, blowing horns and holding various Instruments of the Passion, alternate with sheafs of foliage to form the archway above. Two more angels blow horns in the corners of the carved alfiz overhead. 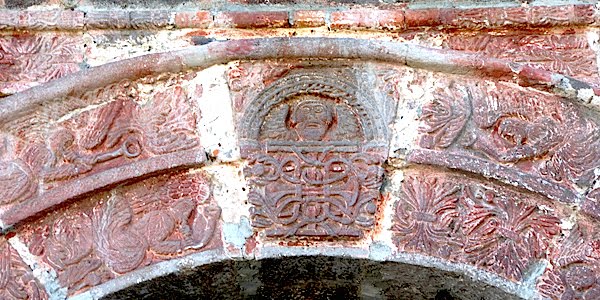 The scheme culminates in the carved relief emblazoned on the keystone, which depicts a bearded, winged head, framed by a layered arch. Taken together with the associated reliefs, this image has been interpreted to represent Christ in Judgment.
This elaborately carved entry, with its proliferation of musical and floral symbols in conjunction with the Passion and apocalyptic imagery, served to convey the Franciscan message as well as underscore the sacred nature of the building to the indigenous and Spanish viewer alike.
*The remains of the adjacent convento are now largely abandoned, its arcaded porteria blocked by rubble.
* Check out our other Hidden Gems: Xichu de Indios; San Felipe Sultepec; San Pablo Malacatepec;  Ocoxochitepec; Mixquiahuala; Cherán;