In the last of our three posts on the monastery church of San Martín we consider the historic main altarpiece. 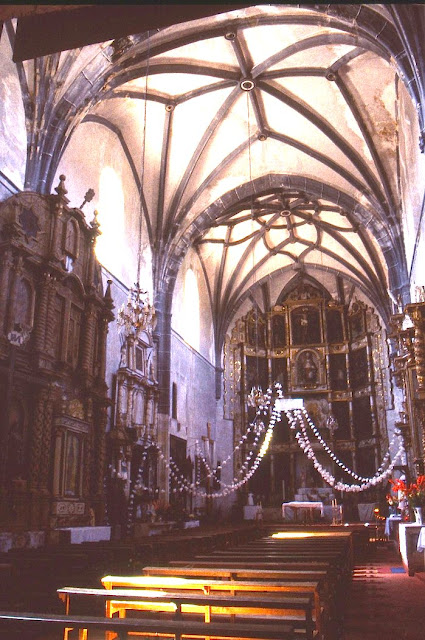 The subdued church interior, completed about 1570, is almost certainly the last work by, and the last resting place of the eminent Franciscan Fray Juan de Alameda, the architect of nearby Huejotzingo and other Puebla churches. 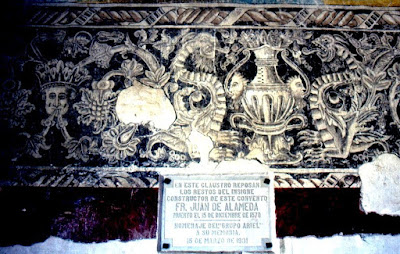 His memorial plaque is mounted in the north wall under the choir, beneath a startling frieze of grotesque serpent masks with Aztec speech scrolls.
Covered by a network of Gothic vaulting, the lofty nave is a treasury of colonial religious art, containing ornamental altarpieces, baroque paintings, local santos and a variety of carved stonework.
The Main Altarpiece
Soiled and neglected for many years, and atrociously overpainted in the 1800s, this early colonial masterwork was finally restored in its entirety in 2012. Its Plateresque framework was probably fabricated around 1570—among the small handful of surviving 16th century altarpieces in Mexico.
Slender baluster columns divide the four principal tiers, supporting classical entablatures decorously carved with Renaissance cherubs and swags. Originally covered with silver leaf and painted in brilliant reds, yellows and blue/greens—it is now visible again after 450 years! 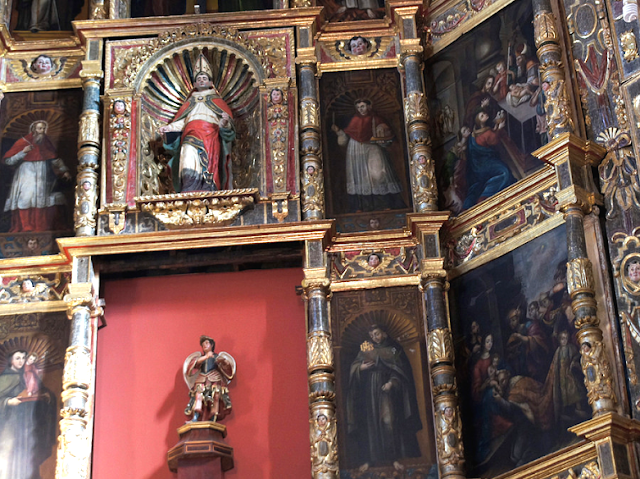 The statue of the Archangel Michael dates from the 1600s, while the mitered image of St. Martin of Tours, the patron saint of Huaquechula, occupies the place of honor in an ornate shell niche at the center of the retablo.

Most of the relief sculptures are original, notably God the Father at the apex and the Apostles and Evangelists along the base, whose expressive bearded faces and strong sinewy hands embody the simple faith of these pioneers of the early Church.
The Paintings
In the 17th century, many of the original paintings and statuary were replaced, notably with a cycle of 17 canvases by the then up and coming Mexican artist Cristóbal de Villalpando.
Signed and dated 1675, this sequence of paintings is the oldest known, most complete, and probably the finest early work of this influential baroque painter, predating his only other known complete cycle in the retablo of St. Rose of Lima at Azcapotzalco.
They retain the Seville influenced, Mannerist style of earlier in the century, using a subdued palette—very different from the richly colored, dramatic baroque compositions of the artist's later career—as well as a certain idiosyncratic, popular touch.

The most ambitious paintings are the six large outer canvases of familiar scenes from the life of the Virgin.* Many of the pictures have fascinating genre details. In the Adoration of the Shepherds, for example, a peasant woman offers the Christ Child a fresh egg from her basket.
Narrow canvases flanking the central calle portray somber Franciscan saints, probably replacing earlier figure sculptures.
During the restoration, traces of 16th century murals were uncovered behind the altarpiece, primarily consisting of floral decoration with medallions.
*lower tier: The Annunciation; Adoration of the Shepherds. middle tier: Adoration of the Magi; The Betrothal (Desposorios).  upper tier: Nativity of the Virgin;  Presentation in the Temple

top tier: Assumption of the Virgin;  Ascension of Christ?