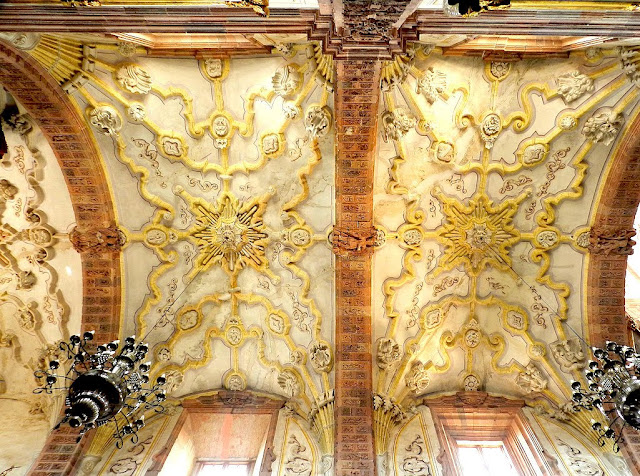 The interior of La Valenciana outshines the exterior in its opulence. Beneath lush rococo rib vaults, arabesque shell niches alternate along the nave with foliated archways and coffered pilasters, in a controlled decorative procession. 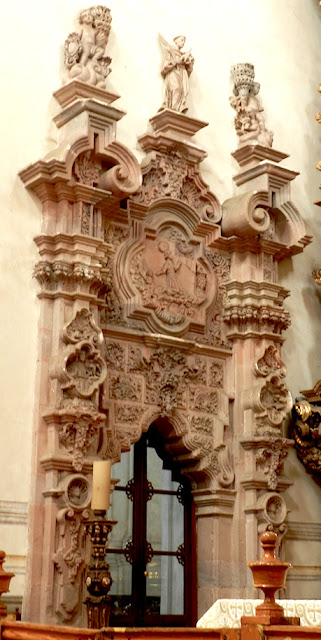 La Valenciana, the sacristy doorway;                               the pulpit
The ornate sacristy doorways are children of the north porch, their Moorish archways springing from cushioned pilasters headed with giant volutes.
Among the exceptional pieces of church furniture, the exquisite wooden pulpit is beautifully carved, painted and inlaid with ivory and marquetry. The rippling curves of pulpit, canopy and stair rail combining to create a dazzling display of artistic virtuosity.
The Altarpieces
Eighteenth century artistry achieves its climax in La Valenciana's three superb baroque altarpieces.  Although they have been attributed to Manuel Antonio de Cárdenas, a master carpenter and sculptor from Querétaro, who died in 1778 or 1781, they were completed by others, including members of the Ureña family* under the maestro de obras Francisco Bruno de Ureña.
The chief glory of these retablos is their dynamic sculptural quality, evident in their opulent frames of encrusted gilded estípites and niche pilasters, festooned with garlands and dripping with spirals, volutes and layered lambrequins—the climax of the terminal baroque style in Mexico.
In addition to numerous wriggling cherubs and heroic archangels, there are several superlative statues of saints in the rococo-inspired Queretaran style, marked by their elegant carriage, fluent gestures and sumptuous robes of gold and polychrome.

*Known as El maestro transhumante, the "peripatetic master", Felipe de Ureña was the most influential of the Mexican born architect /designers to introduce and expand the Churrigueresque style into New Spain. During the second half of the 18th century, together with family members, he was primarily responsible for the spread and subsequent evolution of this ornate late baroque style into cities across Mexico, especially along the silver routes north of Mexico City.
Primarily an innovative designer and fabricator of altarpieces, he later adapted the barroco estípite style as it was called, for church facades. His elegant and distinctive designs are recognized and known as the felipense style.
text © 2017 Richard D. Perry
color images by Niccolò Brooker and José Ignacio Lanzagorta
Posted by Richard Perry at 2:22 PM